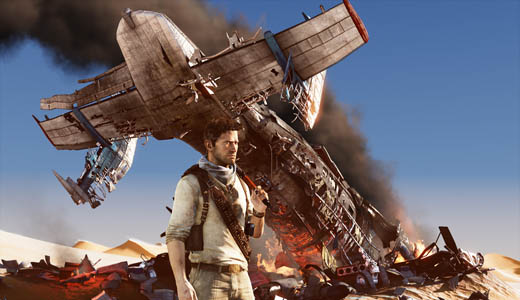 Shane the Gamer’s founder has been writing video gaming articles; reviews, previews, news and features for centuries and then some. Every now and then there’s a moment, a game or an interview that was the start of greatness.

In late 2011, while shanethegamer.com was still within planning stages, Shane sat down with his now personal friend Keith Guerrette, the Lead FX Artist at Naughty Dog while he was on a whirlwind trip down-under promoting what had just released from the studio; Uncharted 3. Here’s the full interview:

With 6 years experience within the games industry Keith worked on some top shelf stuff, including Uncharted 2 and 3. Shane: What was the deciding factor that motivated you to get into Games Development?

Keith: Well, I knew that I loved CG Graphics (Computer Graphics). Being able to create my own worlds. So I went to university and learned about Animation, compositing and entertainment. I really tended towards special effects, visual effects, the fires the explosions, you know, the icing on the cake.

Every time I get a new assignment, it’s like a puzzle, it’s fun, technical.

It’s a really cool challenge. I looked into Games Development, built my portfolio and been within it for 7 years now.

It’s been awesome, it’s cool. (And) we are all gamers at the office.

Shane: Your title/Career as a Lead FX Artist has seen you be involved in Uncharted 2 & 3, what else have you been involved in?

Keith: I entered into the games industry with a studio called High Moon (Vivendi Universal), in San Diego.

I joined then when they were working on a project called Dark Watch, on Xbox (also PS2).

Then (there was) Darkwatch 2, right before Activision purchased them and shifted their focus (Darkwatch 2 was cancelled). (Me jumping in: Tell Activision to bring back the Soul Reaver series!!!)

This was (also) around the time that I left to go to Naughty Dog to take over the tools for the Visual FX.

They basically sat me down and gave me a bunch of programmers and I re-wrote the tools for them, and have been there ever since.

Shane: I realise that in Game Development there are alot of challenges, but is there anything that shines out as the greatest challenge for the Uncharted 3?

Keith: When we started the Uncharted series we wanted to take a different path.

The first Gears of War had just been released and there was this whole theme around a post apocalyptic world going on.

So we wanted a story driven, emotional experience as opposed to big gun fights and super soldiers.

The characters needed to be relatable and interact (with eachother).

This was the focus on Uncharted.

When the first set of reviews came out for Uncharted 2 they completely caught us of guard. 10 out of 10 and more kept coming, so we knew we had to do an Uncharted 3 immediately.

There was alot of pressure to find what made Uncharted 2 so successful. What did we do right, what did we do wrong… How can we improve on that?

We (began) looking for more of a character tie in and story and expand the characters.

What we ended up with for this game (Uncharted 3) was the most rich and depth filled storyline of all of them so far. Shane: Was there anything left out of Uncharted 3 that you wanted to include but could not?

Where we started, back at the drawing board, why asked ourselves, what do we want to see in the game, what would be epic?

So we all sat down just trying to think of super awesome cool things and so we figured out the story and began working out how we could integrate all of these cool things into gameplay. Some if it didn’t.

We dropped out some gameplay mechanics, some really cool set pieces. So we have this plethora of other cool game ideas and story beats that we would like to include in another game, maybe.

I can’t really say any specifics as we will probably try and use them (for future games).

Shane: Maybe in the fourth one? (Uncharted)

Keith: No, no I don’t think we will be a doing a fourth one [sic – ha, are you sure on that??]. We are not tired of it, if we did a fourth one, we need to be sure it’s worth our energy and the fans energy to play it. Wanna make sure we do something new with it, make it worthwhile. So we would need to figure out what that is.

Shane: Where to from here, re: Game Development?

Naughty Dog is such a rewarding company to work for.

It’s really rewarding and I will definitely spend a bit of time at Naughty Dog and see where it all goes.

As far as other projects go, I don’t know what we will be doing next, but there’s a tonne of creative ideas and we got a lot of great people out there, they’re also open to hearing ideas. It’s like a Garage Band filled with 150 Developers.

Shane: Did Naughty Dog have anything to do with the Production/Development of Uncharted Abyss (for PS Vita)?

Keith: No we didn’t directly. Amy, our creative writer/director she worked closely with them for the story and we shared alot of our assets so that the game fits within our franchise. It was weird, as someone else was developing our game. Once we started to see Levels and screenshots start coming back, we were like, Wow!

Initially we were concerned that someone else was going to be developing it (Uncharted for Handheld), and also place it on a portable device.

Shane: Bonus Question! What was your favourite toy when you were a kid?