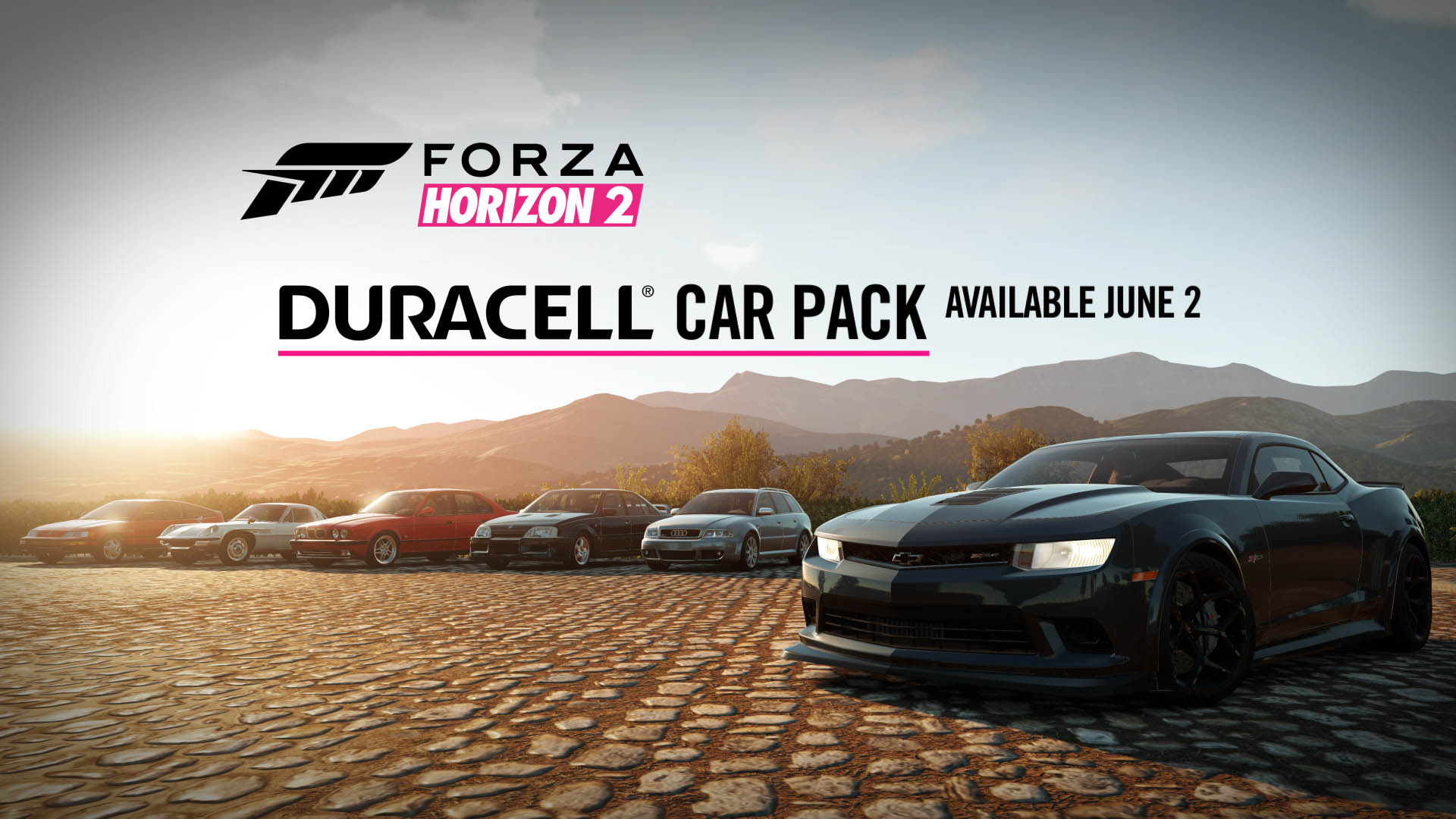 If endurance, reliability, and pure performance are what you’re looking for in your cars, look no further than the Duracell Car Pack for Forza Horizon 2, just released exclusively on Xbox One. With five new cars to collect, race and tune (plus a brand new free-to-all car that everyone can enjoy), the Duracell Car Pack features a compelling combination of timeless fan-favourites and sure-fire modern classics.

The hero of the pack is the Camaro Z/28, a track-proven, new-school muscle car with a winning heritage. Hot on its heels is the 2001 Audi RS 4 Avant, a car whose family-friendly functionality belie some serious road performance. If you want to get old school, the 1991 Honda CR-X SiR and the 1995 BMW M5 are ready for duty. In the classics department, the car that brought the dual-rotary motor to market – the Mazda Cosmo 110S Series II – will astound you with its form and its 7,000-RPM redline.

In addition, the June free car is the Lotus Carlton, a rare super-sedan hailing from a manufacturer better known for its light and lithe sports cars.

Here’s a closer look at the cars in the pack:

While the Corvette C7 is an astonishing car, American muscle fans would be foolish to sleep on the brand new Camaro Z-28. Even at nearly 4,000 pounds, this Camaro delivers astonishing numbers on the strip (0-60 in 4.4 secs and less than 13 second quarter mile times) and that’s not even what it is built for. The Z/28 sports its road-racing homologation history proudly by delivering a sticky and well-balanced track experience. With suspension technology straight out of Formula One and a development program that included the Nürburgring, Road Atlanta, and Road America, this is a track-proven weapon just waiting to stomp the competition.

The RS 4 Avant takes the notion of a wagon being some sort of sedate family transporter and tosses it right out the window. It might be surprising to hear but, in its time, this was the most powerful production car Audi ever built, with a 375-hp twin-turbo V-6. This isn’t just some monster they released to scare grocery-getters; the RS 4 Avant is a true sports car despite its ample room in the rear. Bespoke body panels surround oversize tires, enlarged brake rotors sit behind every wheel, and the suspension is lively and responsive. This speedy wagon is ready for a trip to grandmother’s house; just make sure the road over the hills and through the woods has plenty of twists and turns to enjoy.

The 1995 BMW M5 represents the last year of the E34 series. This was the fastest production saloon car in its second evolution. It embodies both luxury and performance like no other car of its time. The M5 was hand assembled and designed for the BMW owner that wanted to lead the pack in a four-door luxury sedan. While never well suited to the track due to its excessive weight, the M5 is the ultimate touring car. The quick-revving, 3.5-liter, 24-valve, straight-6 engine delivered north of 250 horsepower and the 6-speed transmission was one of the few available in the mid-1990s. Together with its stiffer and lower suspension, the car’s performance will rival many sport coupes in its class. These cars are highly sought after by BMW enthusiasts – find out why in “Forza Horizon 2”.

Whether you are a Honda fanboy or just looking for a something simple and fast, the Honda CR-X SiR is a top choice for nearly any kind of racing. Start with the VTEC – the CR-X is the second model after the Integra to receive it; once you hit 6,000 RPM, the camshaft profile changes, the timing advances, and it’s time to hang on. Nimble by its very nature as a tiny two-seat hatch, the CR-X is a perfect car to whip past the competition. Next, consider the form of the CR-X, which lends itself to photographs or to looking fantastic while cruising with friends. It’s a lot of car in a small package, but isn’t that also what they say about dynamite?

If not for the Cosmo 110S, Mazda may not have gone on to sell nearly two-million rotary-powered vehicles over the next 40 years. The Cosmo was hand built and only sold 1,519 models in total, but it was the halo vehicle from which Mazda’s later success spawned. Seeking a way to capitalize on their investment in the Wankel rotary, Mazda brought this phenomenal and, at the time, futuristic sports car to market. Produced from 1967 to 1972, the 110S initially had 110 horsepower derived from its twin-rotor motor. The series II brought 128 ponies to bear and, with them, a five-speed transmission and an improved ride. Less than ten models were ever brought to the U.S., with car collector Jay Leno owning the only remaining Cosmo stateside. Whether you drive one for its sleek looks or for its screaming 7,000-RPM redline, the Cosmo is a JDM artefact that is worth a spin.

From an automaker best known for its elfin racers and commitment to lightness, the large Carlton seems a bizarre vehicle to emerge wearing a Lotus badge. An executive sedan tweaked within an inch of its life, Lotus’ engineering expertise allowed the Lotus Carlton to be the fastest sedan in the world for a period of time. Born at a time when General Motors owned both Lotus and Vauxhall/Opel, the idea was to build a halo car wearing the Lotus badge to generate some attention to the brand. By boring out and twin-turbocharging the Vauxhall inline six, the 377 horsepower Carlton got a bit too much attention — the 180 mph-capable sedan became so wildly controversial in Britain that law enforcement sometimes spoke of banning it from the road. Perhaps the police were simply jealous, as no cruiser in the UK could catch a Carlton on a clear motorway. Lest you think that it’s merely an unruly straight-line ruffian, Lotus did also tune the suspension. It’s no Elise, but you’d be surprised what the big Carlton is capable of.