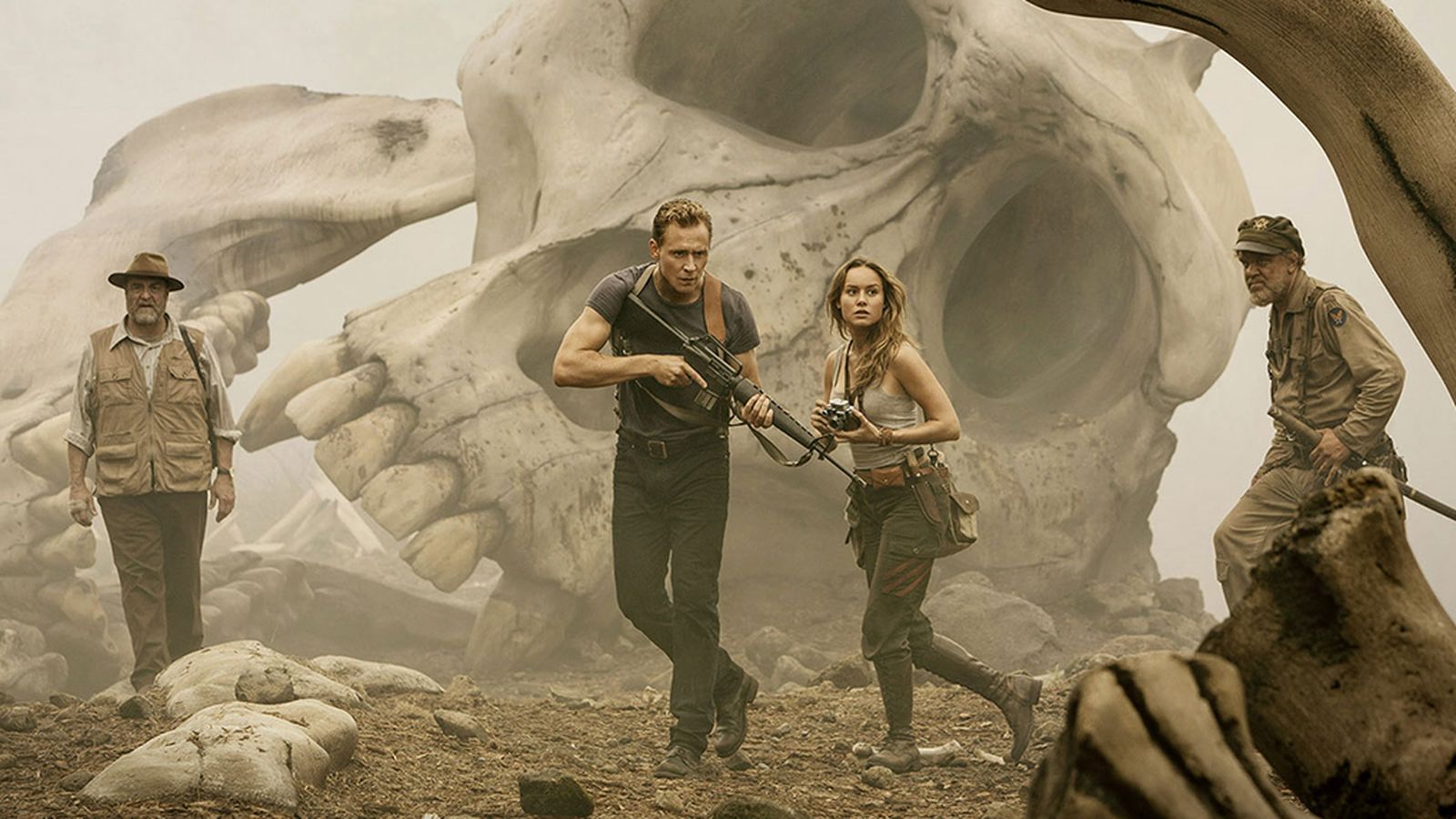 Personally, I prefer a film that gets right in to it.

Kong: Skull Island does exactly that. In 1944 two WWII fighter planes shoot eachother down over an uncharted island. The Japanese and US pilots escape their wrecks and continue the battle on the beach.

Just as one is about to do the other one in, Kong rises…

Skull Island had been known to a faction in the US Government for sometime. But it was a mystery Island. Planes and Boats that had got too close had vanished or made it back in a damaged condition.

Fast track to 1973, Hippie culture, protesting the Vietnam War, US in a political turmoil with Russia and a team of scientists lead by Bill Randa (John Goodman) needs a military escort to charter Skull Island and unravel the mysteries within it. 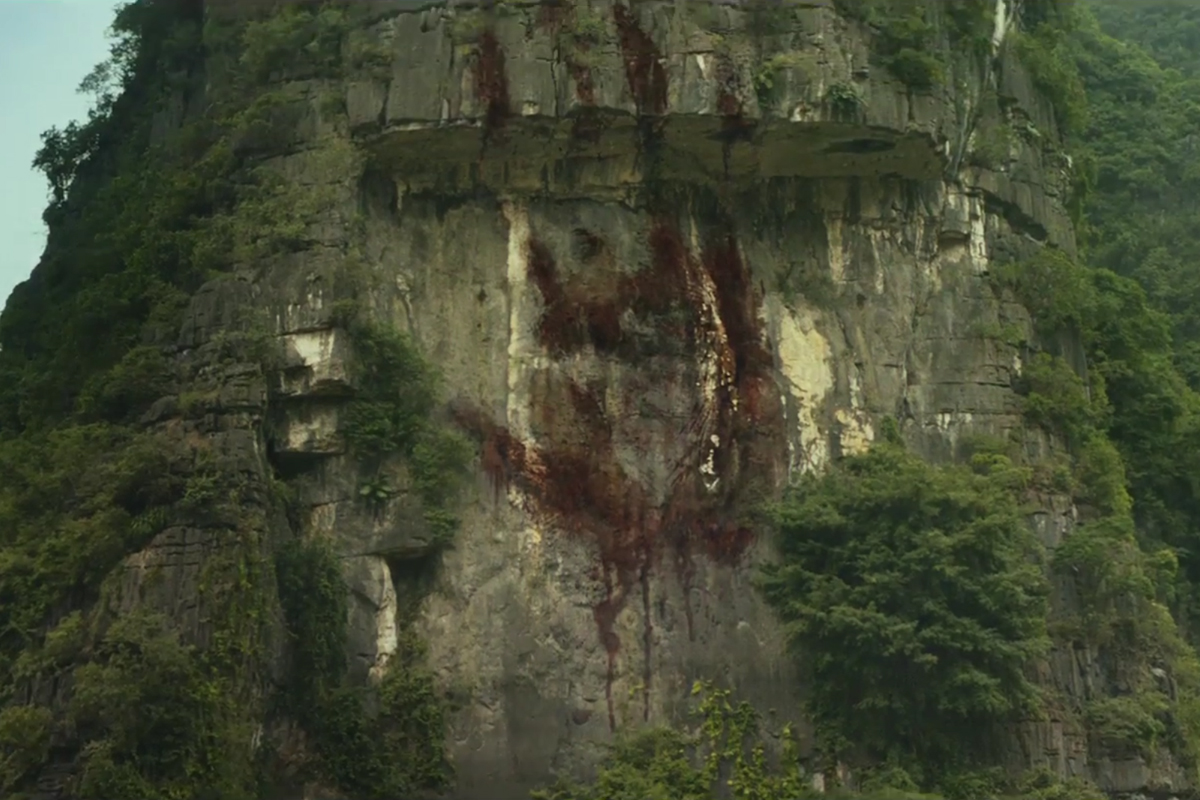 A former British Special Air Service Captain James Conrad (Tom Hiddleston) along with a entourage of Helicopters and soldiers fly to the unknown Pacific Island in search of what lays there.

Joining them is a War Photographer / photojournalist; Mason Weaver (Brie Larson). She is in the belief that there are dubious reasons for this expedition and wants to expose it.

Skull Island as it is known is surrounded by storms – and this has made it difficult for previous exploratory attempts, it also keeps the Islands secrets under wraps.

The scientific team plan on firing off seismic detonations to enable the mapping of the geology of the terrain.

As they precariously make it through the storms to get to the Island they begin dropping what is essentially mini-bombs as they fly over.

This angers one very large inhabitant of the Island… Kong, the King (and protector) of Skull Island and its native people. 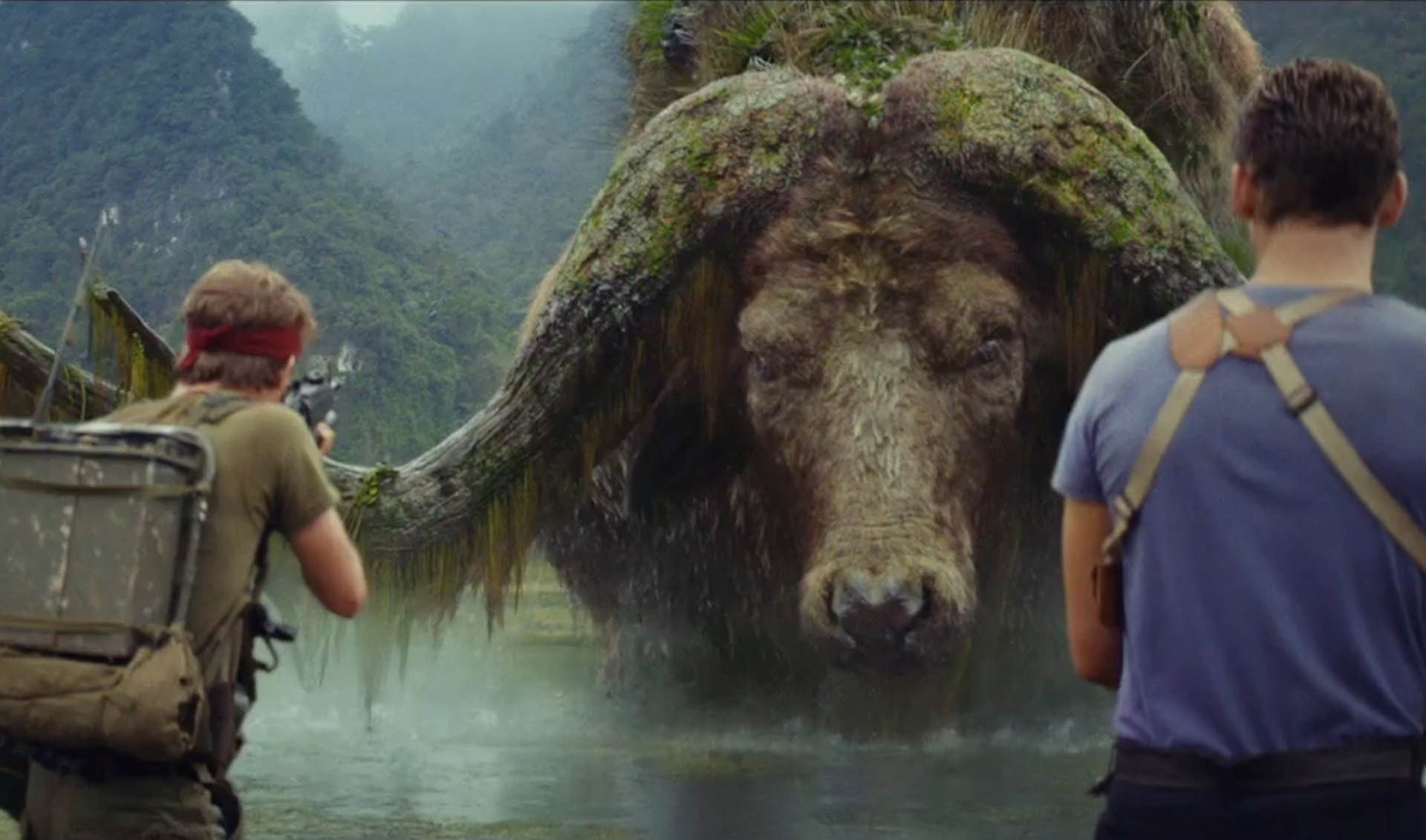 With Helicopters downed – the Scientific and Military teams must trek across the Island on foot. This leads to many fatal discoveries and an eco-system that has ensured that Kong is not the only large species on the archipelago.

The teams end up getting split into two groups, at differing parts of the Island. Bill Randa and James Conrad head one team while a slightly maniacal United States Army Lieutenant Colonel, Preston Packard (Samuel L. Jackson) heads a band of young soldiers.

Eventually Conrad’s convoy make it through to a clearing in the dense jungle and face off with the Natives of the Island – and to their surprise there is a US Pilot living with them. Hank Marlow (John C. Reilly) the fighter pilot who was downed on the beach back in 1944.

The 20+ years that he had spent on the Island had made him eccentric and slightly insane, which made for many laughable moments in the film. Having been on the Island for as long as he had, he had learned from the Natives the dangers, the legends and about Kong and the demise of Kong’s family. 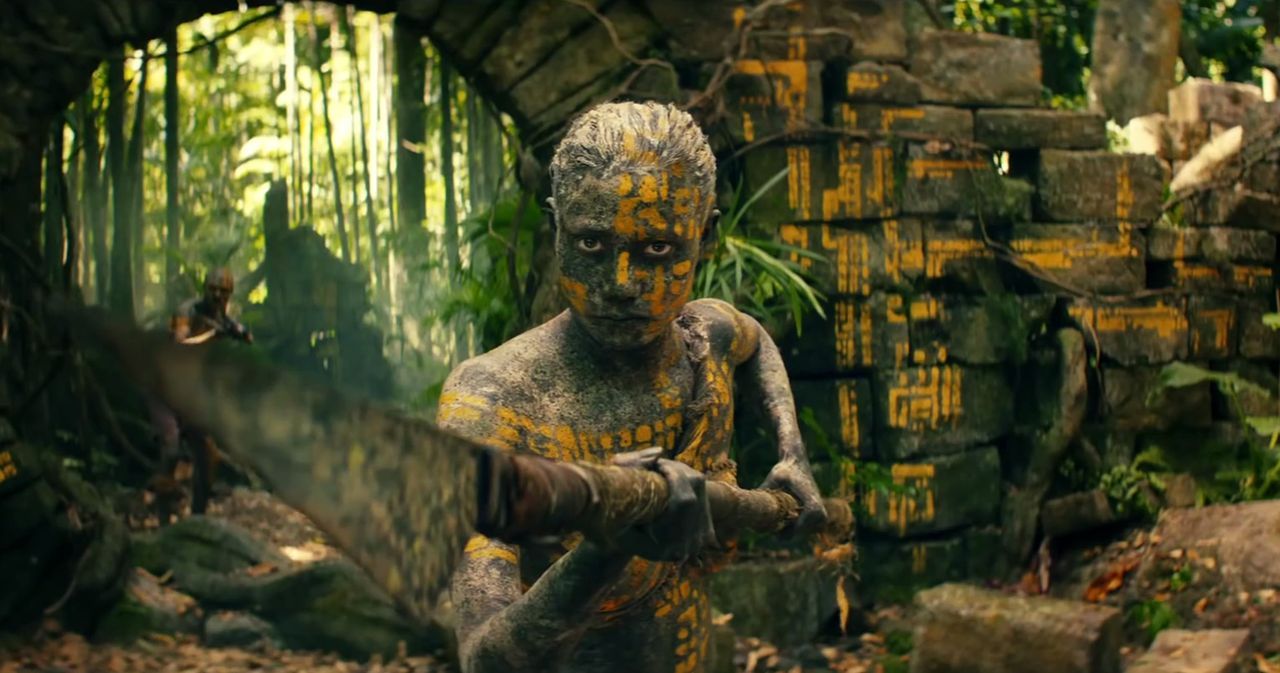 He also warns the group not to piss off Kong and informs them that there are other creatures that live below ground, which he calls ‘Skull Crawlers’.

Setting off detonations across the Island would have disturbed these lizard like reptilians and he also warns that there is a ‘Big One’. Marlow explains that Kong is not a monster, nor is he an enemy, he is the protector of Skull Island and it’s people.

But Packard and his remaining soldiers who are on a different part of the Island see Kong, who downed their Helicopters, as a monster that needs to be killed, in Packard’s eyes as a revenge for the infantry that were killed when their Helicopters crashed.

What ensues is an epically proportioned action feast. Marlow and Conrad’s team prepare an escape from the Island out of a makeshift boat, cobbled together from WWII plane parts. They plan on joining with and picking up Packard’s team along the way to a scheduled resources frigate that will harbour just on the outskirts of the Island. 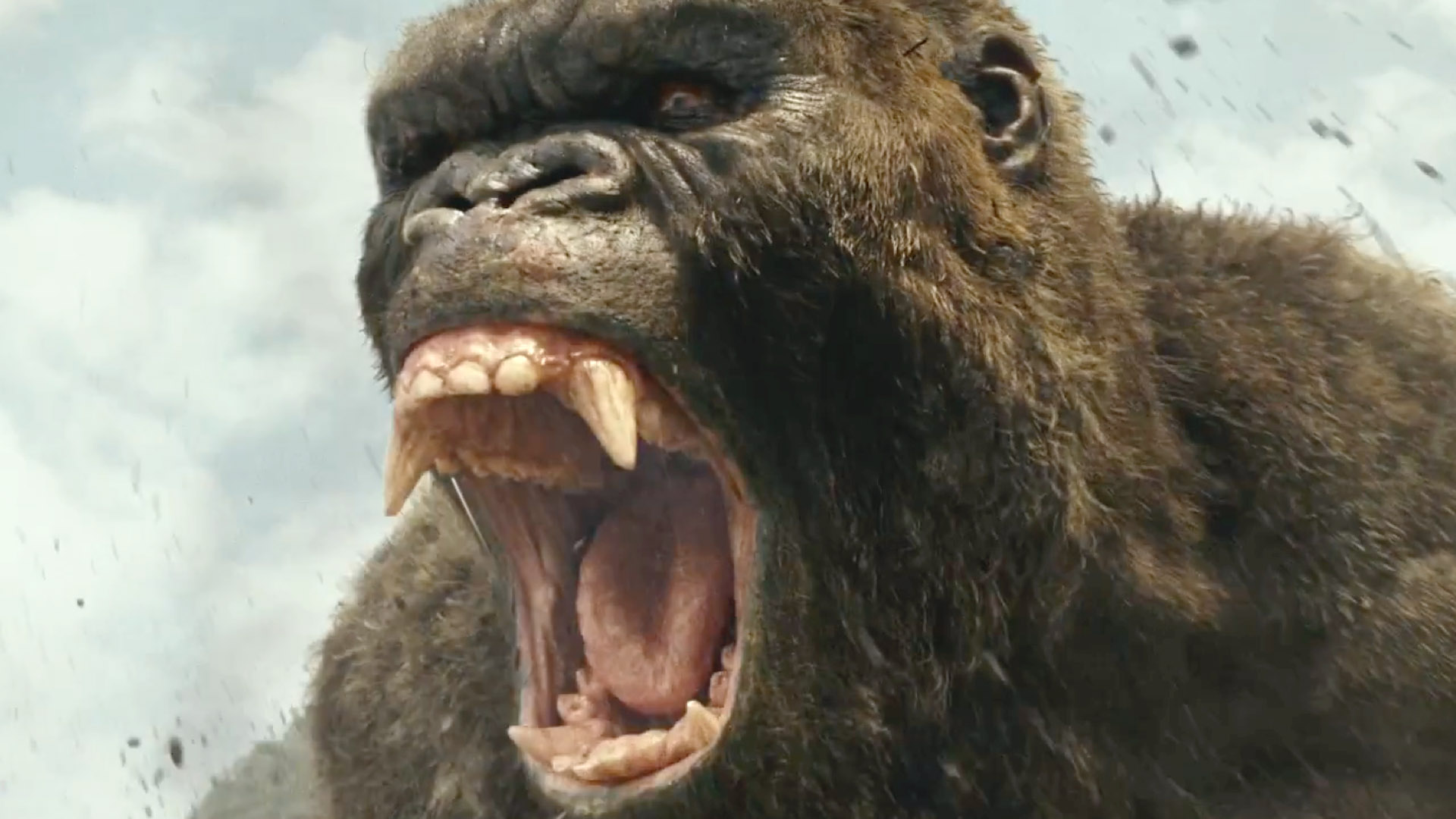 But Packard aims to take down Kong before he leaves, and his actions not only put the survival of the Island in jeopardy but also awakens the Big ‘Skull Crawler’.

It wouldn’t be a King Kong flick without a larger than life battle scene and when watching the film you will be treated with many cinematic moments such as these.

Kong: Skull Island was a film that I had been eagerly awaiting for and my hopes were high. I am pleased to say that I was not disappointed – infact it was beyond what I had expected, bigger, badder and with a solid narrative.

This is a film that even non-fans of Kong will savour and I am hoping that this is the first in what will become a reboot of the film franchise… (I don’t want to give away Spoilers).