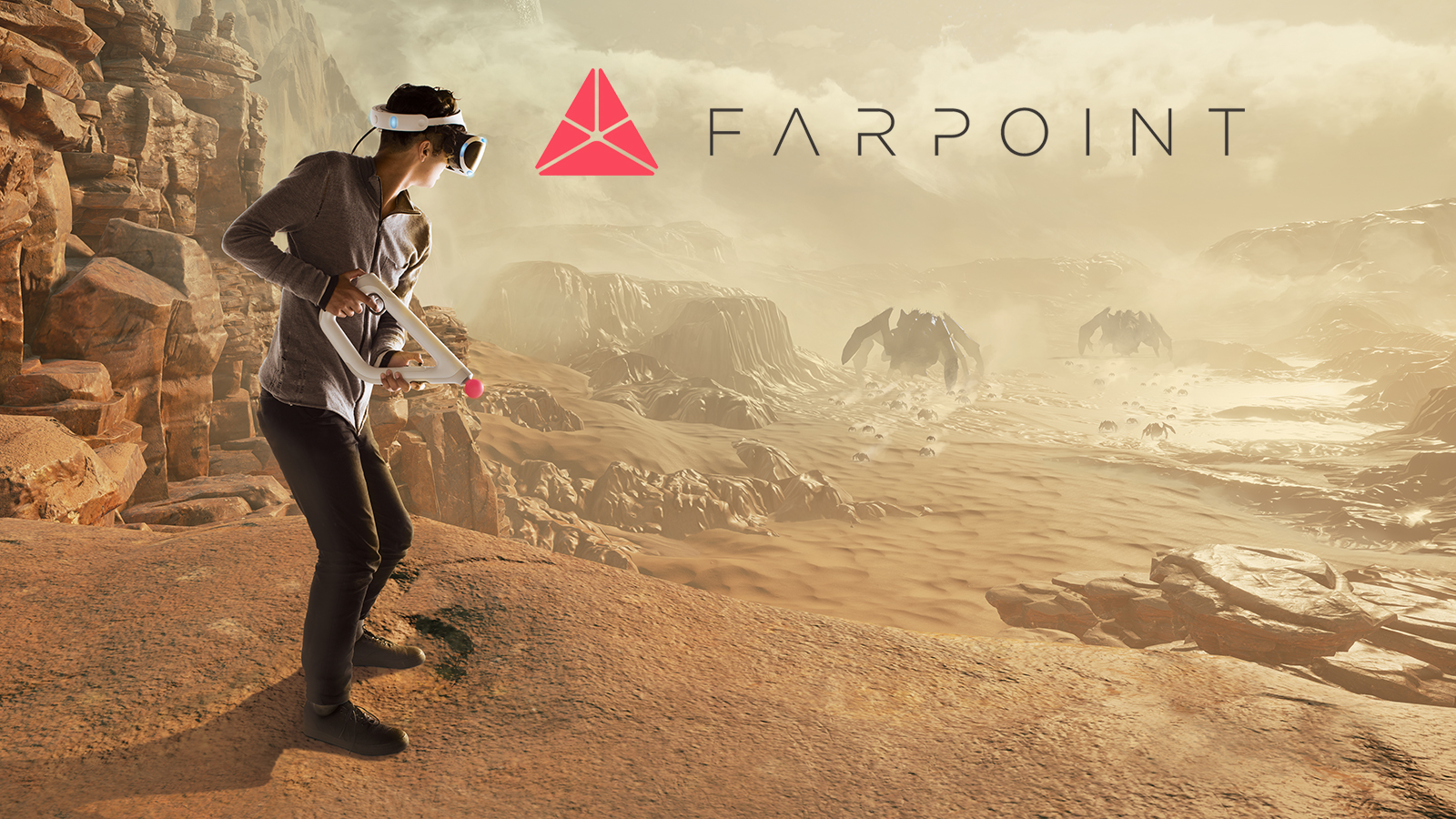 Regardless of what the marketing chap from Sony said as he introduced us to the Farpoint hands-on session, about the PSVR only being six months old, we have now passed the one-year anniversary of the launch of this modern wave of virtual reality. Both the Oculus Rift and HTC Vive on PC have just celebrated their first birthdays. In the last year, I’ve played enough VR to be over the initial mind-blow sensation of being transported to a virtual environment. I’m no longer just seeking “experiences”, I’m keen to see proper AAA games.

For PlayStation VR owners, fingers-crossed, Farpoint could be the one. 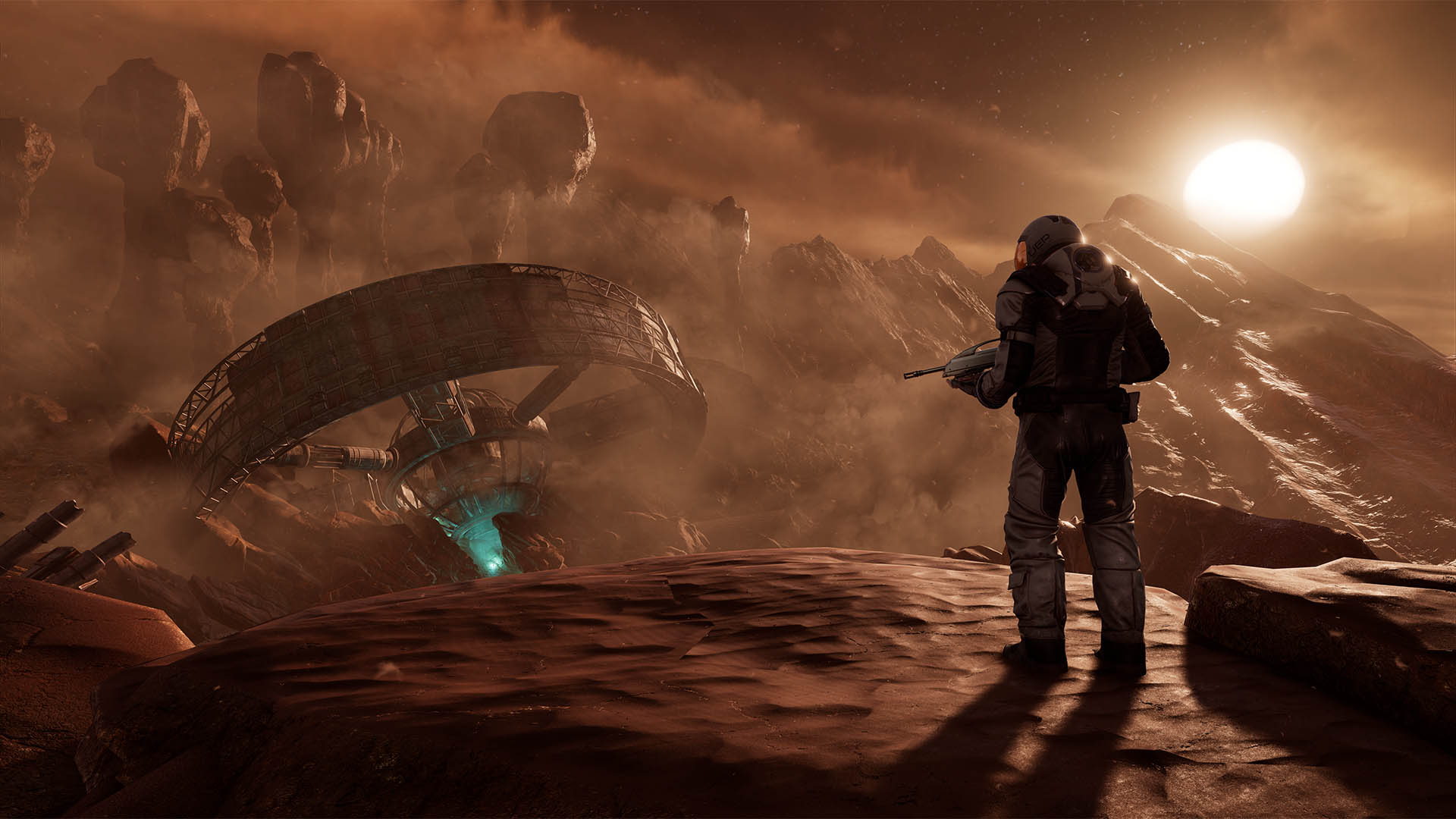 Being a first-person shooter, Farpoint is more of a standing game than a sit-down affair. You are going to want to be able to duck behind cover and swivel 180-degrees. Positioning myself in front of the demo pod, I put on the PSVR head mounted display and the headphones. I was then handed the new PlayStation Aim Controller.

Yep, Farpoint comes with a prop – the PS VR Aim Controller, which serves as both a gun proxy for aiming and your movement controls. It’s light and anchors you to the virtual world. You can wave it about and see your in-game gun matching the movement. The device is ambidextrous, accommodating us right brainers with no issues. 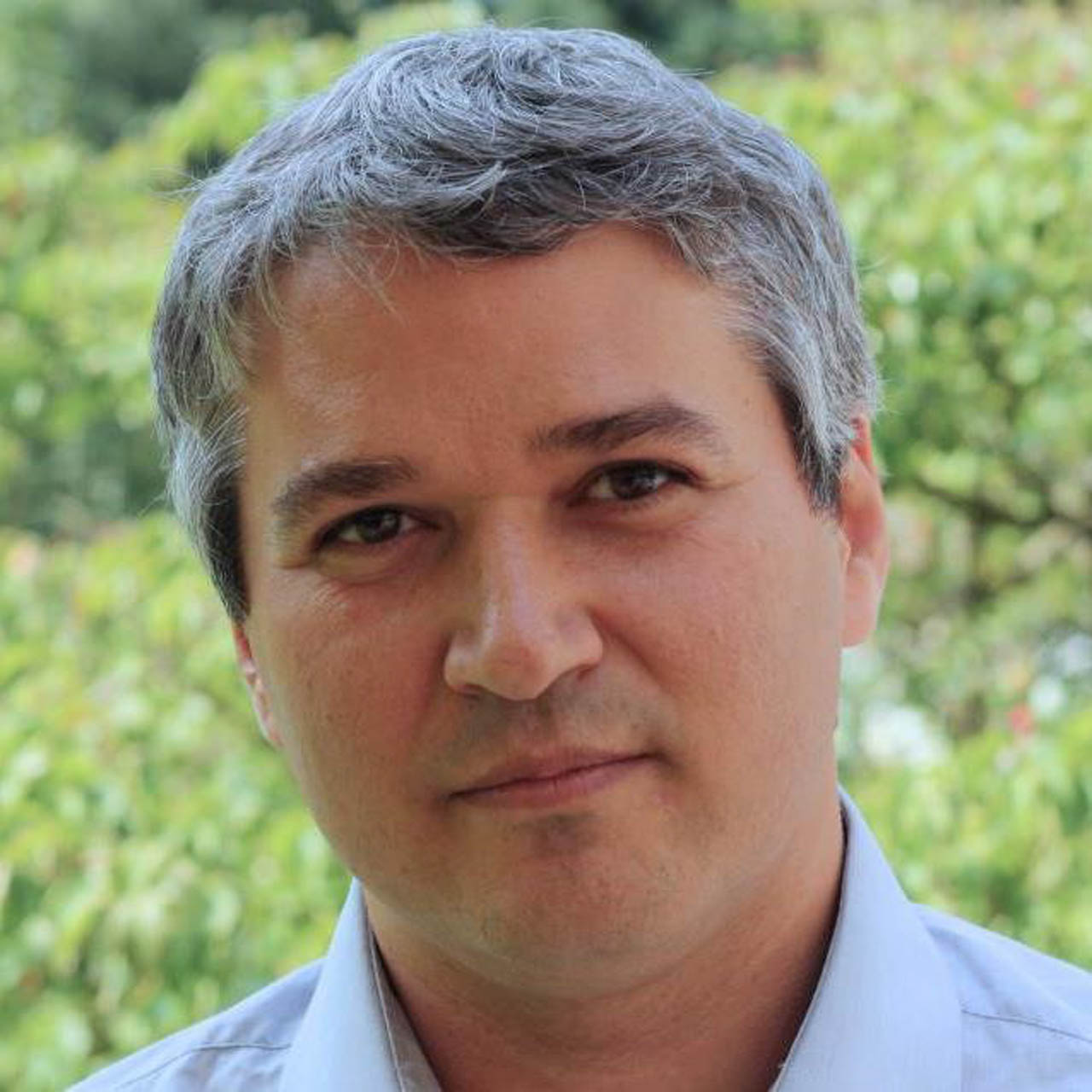 Seth Luisi, founder and game director at Impulse Gear, the studio that developed Farpoint, was on hand to answer questions. He explained one of the key significant things about playing with the Move controller.

Similar to games like Raw Data and Arizona Sunshine (coming to PSVR soon), which both used the Vive controllers with HTC’s VR kit on PC, if you are a good shot with a gun in real life, you are going to have an advantage in the game. There’s no aim assist or anything like that. You are pointing the gun, and you are firing where you aim.

After a short intro video, I found myself sitting in the huge glass cockpit of a spacecraft. All around me were buttons and lights. I was on my way to pick up two scientists from a space station that were studying a nearby anomaly. As the ship approached the space station, in the background I could see an ominous-looking wormhole. It all looked fantastic in the PSVR, giving me a great sense of immersion. 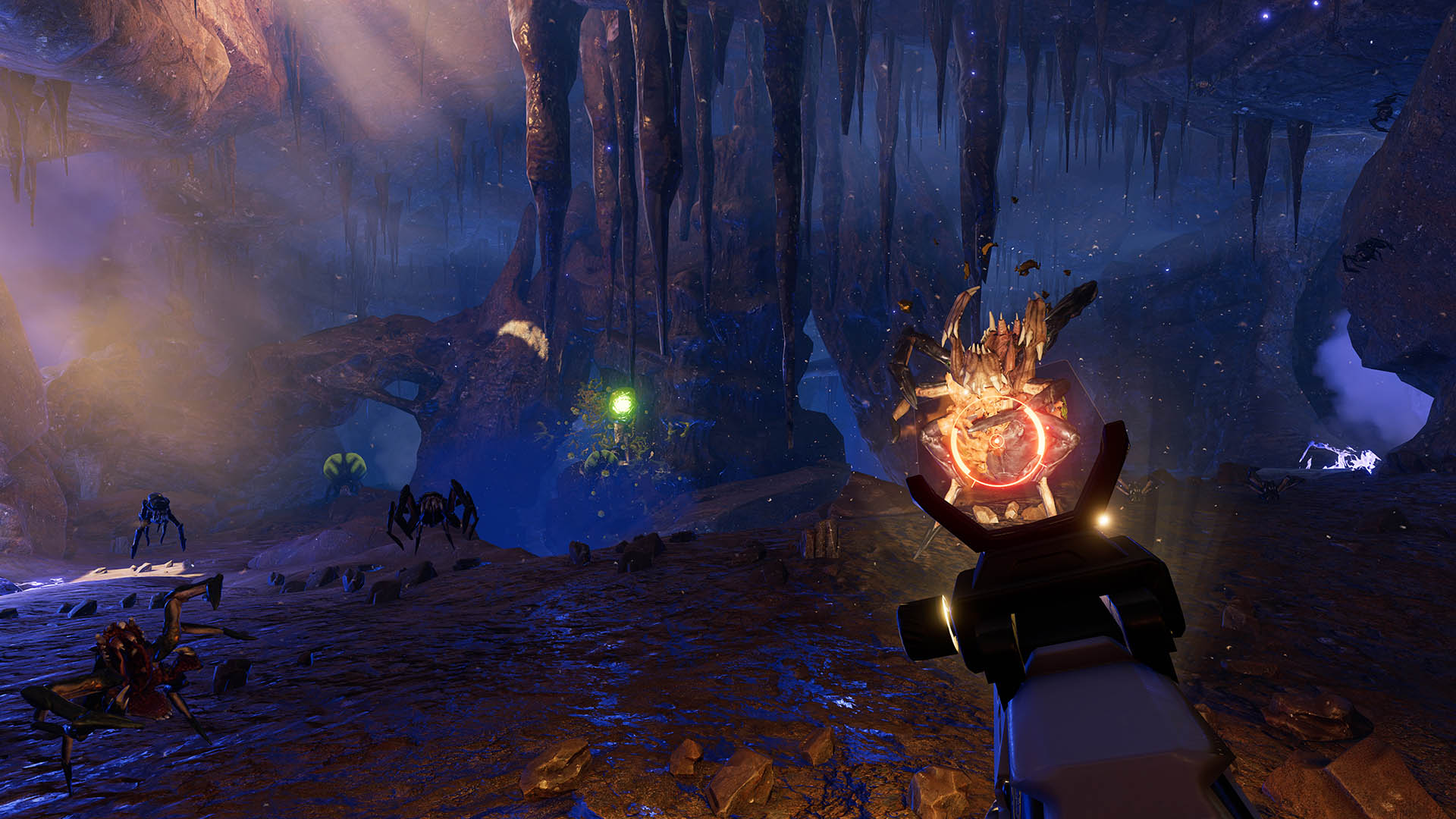 As things started to go predictably wrong, my passengers were forced to EVA their way across to my ship. Then, right on cue, the wormhole thing went off, sucking the space station, the scientists, me and my ship into a vortex.

Still sitting on the deck of my ship (but standing in real life), wind and debris buffeted against the windows as I entered the atmosphere of some alien planet. Suddenly, my ship was struck by debris from the disintegrating space station in front and it all went black.

I was then standing in an escape pod, hurtling towards the planet’s surface. On the radio, I heard the scientists struggling with their parachutes (why astronauts have parachutes is a bit of a mystery). 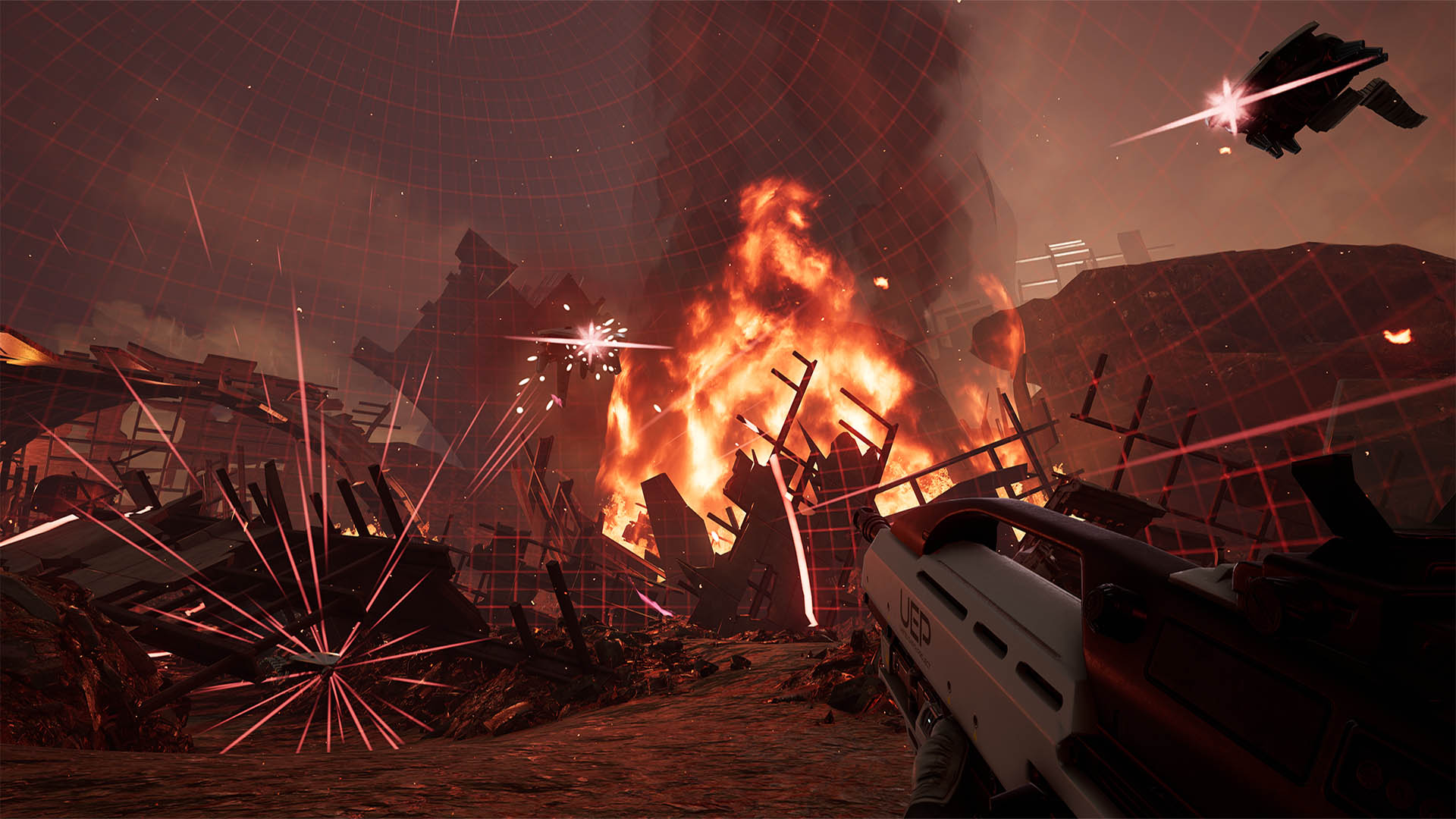 I really can’t stress enough on how this all looked in VR. I wasn’t watching this unfold, I was experiencing all this first hand.

To be quite honest, a year ago, I’d have paid good money just for that breath-taking intro sequence, alone.

Safely on the ground, the door to my escape pod opened revealing a rocky world that looked fraught with danger. It is absolutely impossible for me to describe the sense of presence that Farpoint gave me as I walked away from the pod, down a gentle incline.

I was there, on that planet! Real rocky formations on each side and red dirt under my feet. Looking skyward I could see a massive storm, but behind me clear blue sky revealed an unfamiliar view of the heavens. 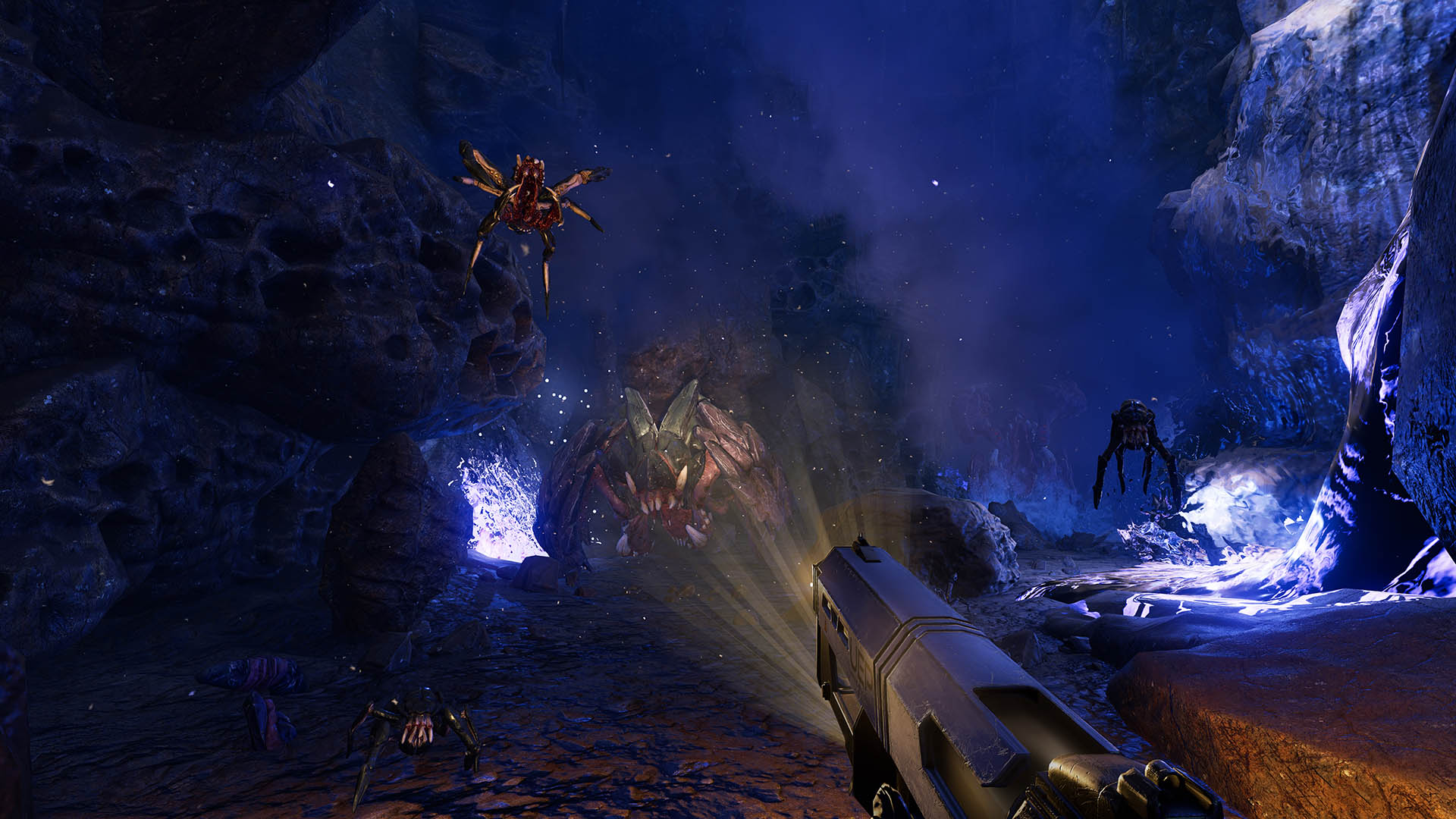 The biggest hurdle with any moving VR experience is how to prevent nausea. Some people are more susceptible than others. I don’t usually have any problems, but The Vanishing of Ethan Carter VR, really turned my stomach.

There’s a thumbstick under the barrel of the Aim Controller that allows you to strafe left and right and walk forwards or backwards. With no helmet or anything else as a frame of reference, by default, Farpoint offers little assistance to those with weaker stomachs. I asked Seth Luisi what locomotion options were available in the game, and he reassured me that if you do find the default movement method a bit queasy, you can toggle things like stepped turns and teleportation.

I found the default fine, and Seth told that they spent quite a lot of time adjusting the speed of motion to make the movement as comfortable as possible. 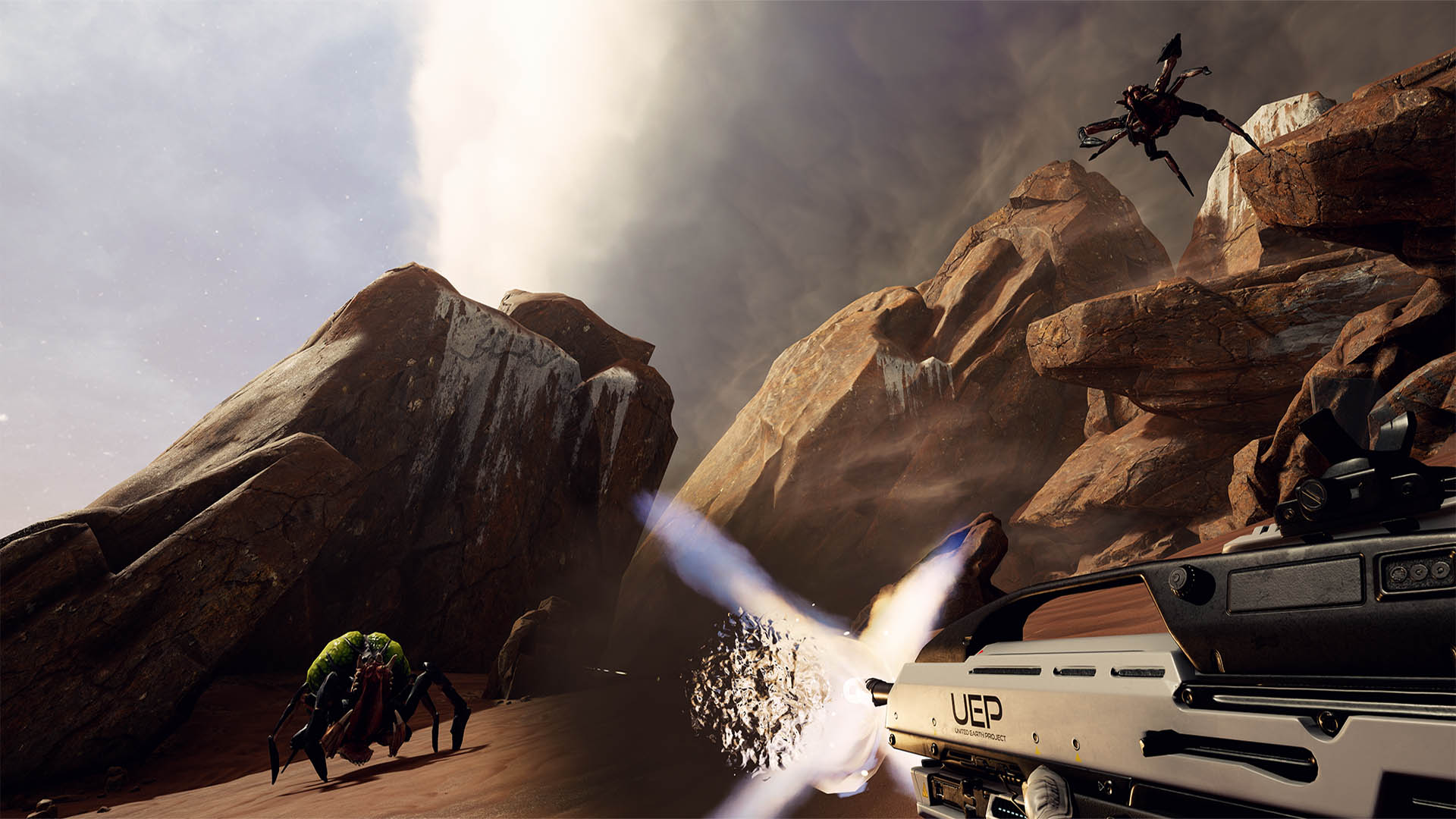 During the solo preview, I came across one of the scientists’ parachutes, scanning the area triggered a holographic recording. It’s mainly through this medium that the game imparts it’s narrative. I got to observe a scene with one of the scientists helping the other, who had been injured. The cut scene revealed the direction that they were heading, and so I moved on.

It was whilst walking thought a shadowy gully and I first saw something moving out of the corner of my eye. Then another. I was under attack from metre wide alien spiders coming at me from everywhere. I had managed to dispatch a few of them when the Sony rep tapped me on the shoulder. I nearly shat myself. He apologised and told me it was time for my co-op session.

My partner for the co-op was the game director, himself, Seth Luisi. Starting in a lobby area, you can communicate with your partner via the PSVR microphone, whose avatar is standing just a few meters to the side of you. You can also wave your rifle at them or bat some loose objects over to them. 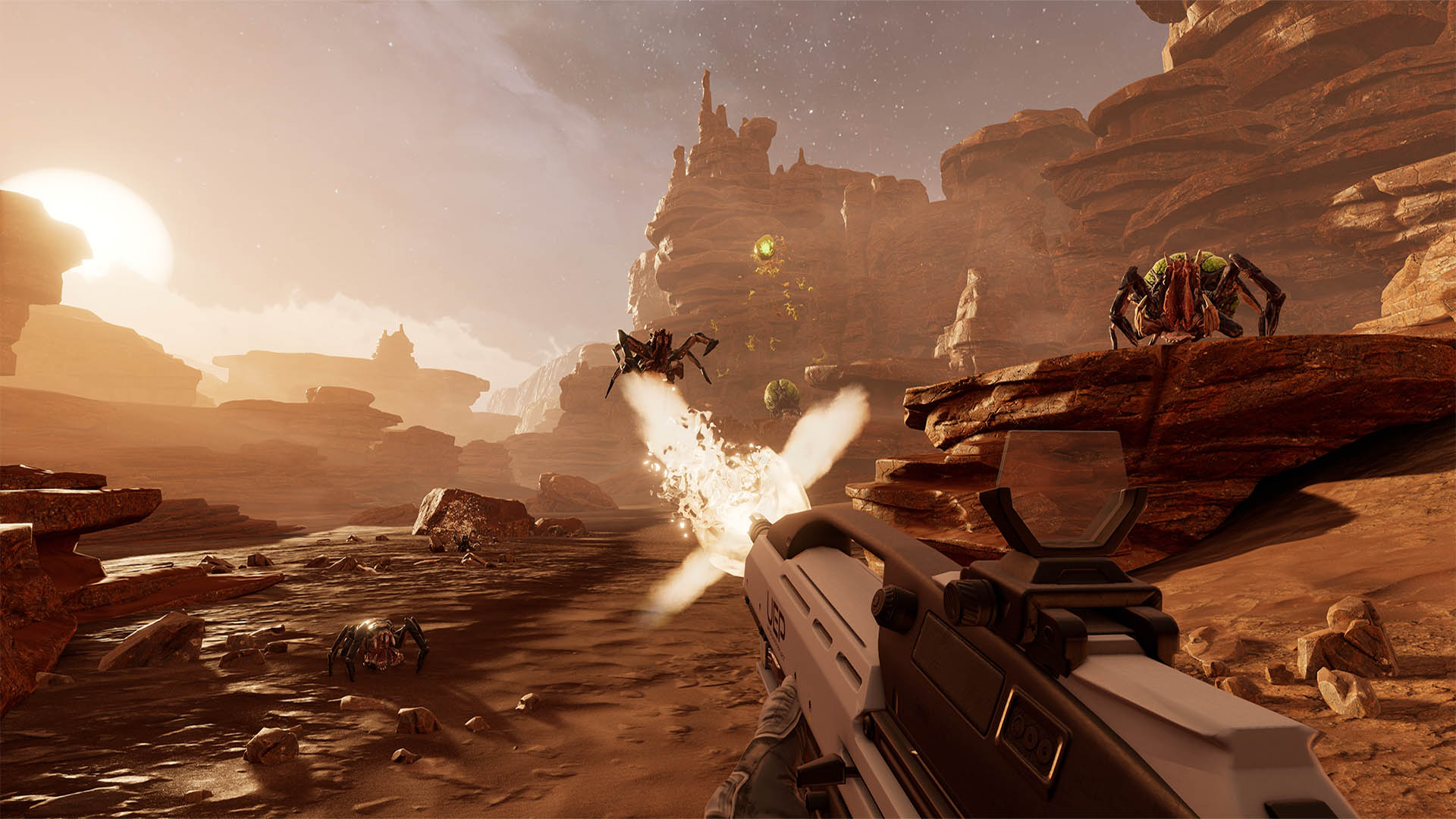 If your partner takes too many hits you can revive them. But you need to have cleared out the enemies first. Whilst the action was frantic, the AI seemed to know what they were doing, managing to take us both out a couple of times. The enemies were varied, with infantry joined by aerial drones and huge mech-like machines.

After a few failed attempts to cross the wreckage it was time up, but I had a great insight into the sort of fun a couple of friends are going to have when the game comes out next week.

To say I’m looking forward to Farpoint would be an understatement, and this is from someone with an HTC Vive. The game’s slick production values coupled with the PSVR’s ease of use make this a game for both core gamers and newcomers alike. The Aim Controller, which may look a bit gimmicky, really comes into its own perfectly complementing the games incredible and immersive experience.

Look out for a full review soon.