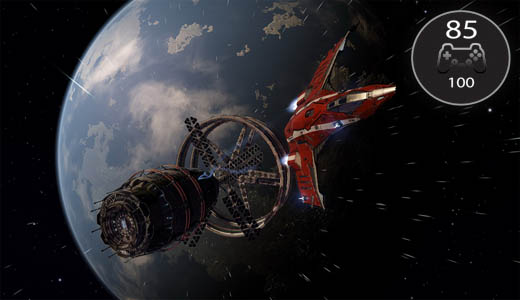 Shane the Gamer’s Darren Price has spent the last month cruising the space-lanes in Frontier Development’s Elite: Dangerous. He takes some time out from engaging in a bit of space piracy to tell us about his experience.

In the early 80s the original Elite was my first experience of an open world adventure. Gaming sandboxes may be something we take for granted now, but back then the idea that I could just do whatever I wanted in a game was a brand new and rather amazing concept.

I spent hours flying around trading goods and fending off attacking space pirates. Almost a decade later, Frontier: Elite 2 allowed me to explore the galaxy and land on planets. 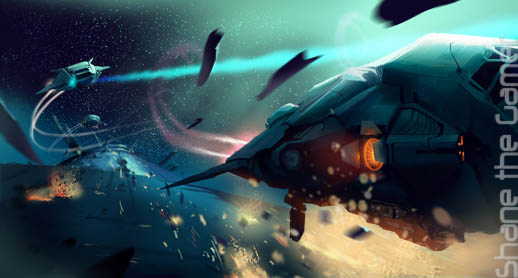 The old Elite games are so important to me, it’s been a challenge to review Elite: Dangerous without my mind wondering into some halcyon dream.

Rubbing the nostalgia from my eyes for a moment, let’s engage super-cruise and take flight with this modern incarnation of a genre-creating game. 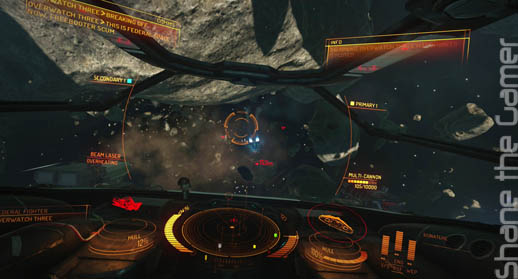 Elite: Dangerous puts the player in the pilot’s seat of a starship and casts them out into the vast emptiness of the galaxy.

Every visible star in the sky has a planetary system that is, theoretically, available to explore. This is sandbox gaming on a galactic scale.

Whilst many of the star systems are uninhabited, a lot of them have space stations and orbital platforms circling around planets. It is between these outposts that the game’s commercial system is structured, and Elite’s commanders forge their careers. 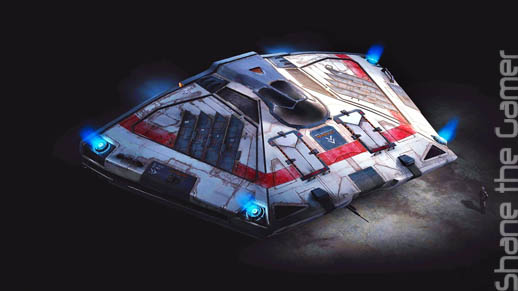 Currently starship commanders can only dock at space stations, but the developers have stated that planetary landings will form part of a future add-on pack.

Whilst I can understand the reason for this given the crowd-funded nature of the game’s development, looking at it is as a commercial game release, it is a bit of a backwards step. This game is supposed to be a sequel to the original Elite games, but it comes across more like a remake of the first game.

The absence of the planetary landings that I enjoyed in the 1990’s Frontier: Elite 2 only serves to reinforce this step backwards. 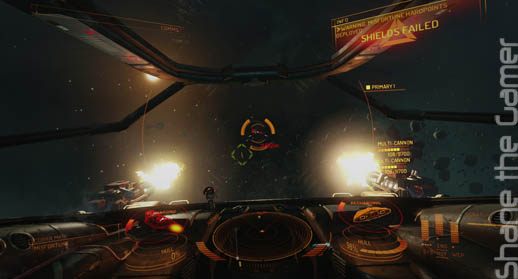 New players start off aboard a small ship docked in a space station with 1000 credits in the bank. When docked, the starport services menu allows players to visit the local commodities market to buy and sell cargo and check the bulletin board for potential contract jobs.

Obviously when it comes to cargo the aim is to buy low and sell high. What contract jobs you take, however, very much depends on how you want to play the game. 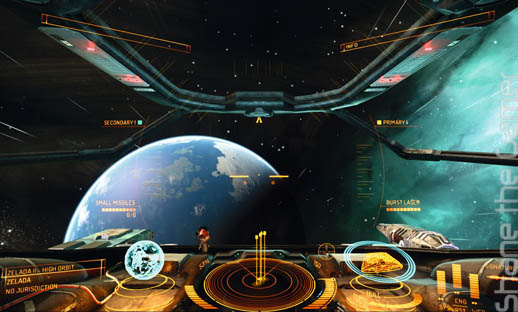 Early on I took simple courier jobs just to make a quick buck. I soon started moving contraband about, increasing my profit margins by a considerable amount.

Soon I could afford another ship with a bit more oomph and start engaging in some of the combat contracts.

This is where Elite comes into its own, it’s very much about what you put into the game as to what you get out of it. If you need tightly defined mission structures to keep you engaged in a game, Elite: Dangerous is not going to be for you. 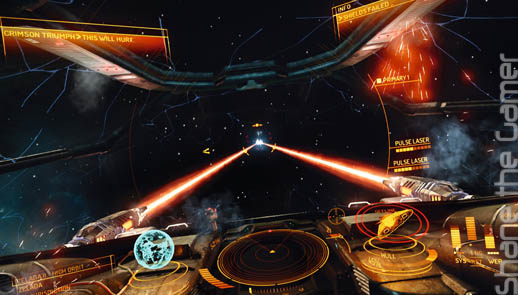 Technically, it’s mind-blowing, given the vast scale of the galaxy open to explore and exploit. As a game, however, it does require a bit of patience and is more akin to Microsoft Flight Simulator or Euro Truck Simulator than an arcade shooter.

If you like the idea of being cast out into a huge simulated galaxy with its own dynamic economy, and doing what you please, you are going to have a ball.

The developers have gone for realism as much as they can, the only artistic licence that they have taken is the assumption that faster-than-light travel is possible. Everything else is based on what we know of the galaxy and the realm of physics. 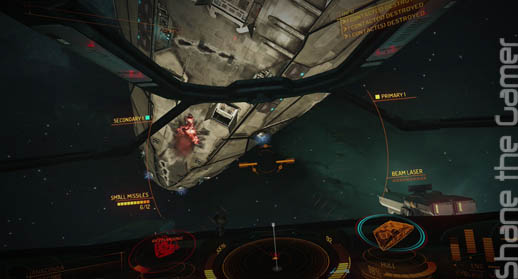 With this in mind, if you are expecting epic space battles like something out of a sci-fi movie you are going to be sorely disappointed.

There’s no added drama and even heated exchanges of fire are somewhat muted affairs. Dogfighting acrobatics can be enhanced by switching off the inertial dampening, placing your space craft at the mercy of Newtonian physics.

It’s pretty cool to turn your cockpit to face your pursuer whilst maintaining your direction of travel. 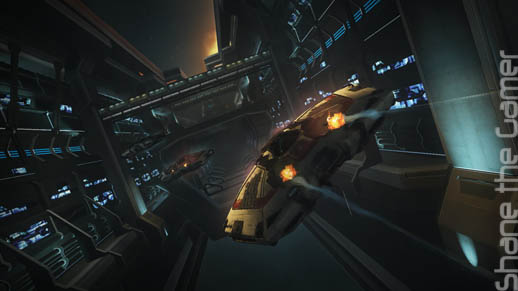 In the world of Elite: Dangerous, it’s not necessarily combat situations that provide the immersion.

There’s something amazing about lifting off from that first launch pad and slowly making your way to the hanger exit. All around you other ships are taking off and landing, you can see vehicles on the stations transport network.

The galaxy, for all its vastness, seems very much alive. 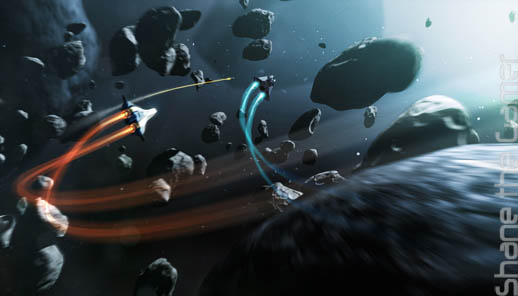 Outside, once your ship has cleared the station, and no longer “mass locked”, with the destination set, the frame-shift drive can be engaged dropping your ship into hyperspace.

The voyage through the hyperspace corridor is an eerie trip though a surreal tube of flashing lights and clouds – like a dream, all accompanied by a strange ethereal whisper.

At the destination the engines roar as you drop into normal space and the local star grows fills the cockpit view, plasma dancing across its surface.

Still in super-cruise you put up, away from the stellar collision course, locking your target and orientating yourself towards the desired space station. At incredible speed you can take in the enormity of the distances between the planets and their star(s).

Tiny pin-pricks of light expand into view, becoming huge gas giants, blue marbles or desolate planetoids. Getting closer, near invisible specks give way to majestic polyhedral or ring-like space stations and orbital platforms as you slow from super-cruise. 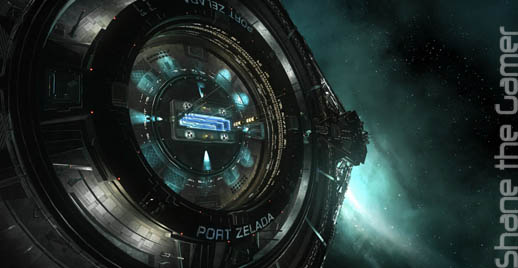 The orbital platforms, with their external landing pads are not much to look at, being of a rudimentary, but functional design. But the space stations are amazing. I’ve spent ages just sightseeing, flying around and between the superstructure of starports, spotting the trees, fields and houses inside the glass habitat rings.

Whilst the game is open for players to experience as they wish, there is a story of sorts.

Via GalNet reports available at starports, players can read the latest news and seek out jobs to propel their careers within the game’s various factions: the Federation, Empire or Alliance plus hundreds of local groups. By taking on various jobs, collectively, players will shape the game’s persistent galaxy. 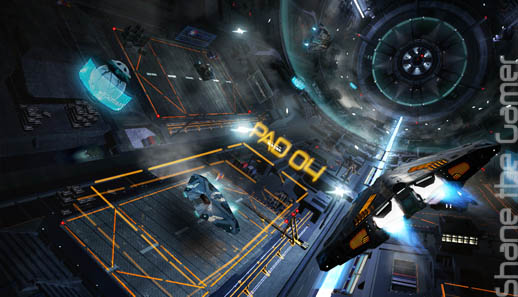 The ultimate aim of the game is to reach elite status in combat, trade and explorer ranks. To do this players will need to obtain the funds to upgrade and equip their starships according to the task at hand.

Huge lumbering Lakon Type-9 heavy freighter with loads of cargo space may be perfect for hauling goods, but will leave commanders at the mercy of pirates if ambushed.

Similarly, fully kitted out Falcon Delacy Anaconda may be able to handle itself in a fight, but doesn’t really have much in the way of cargo space. 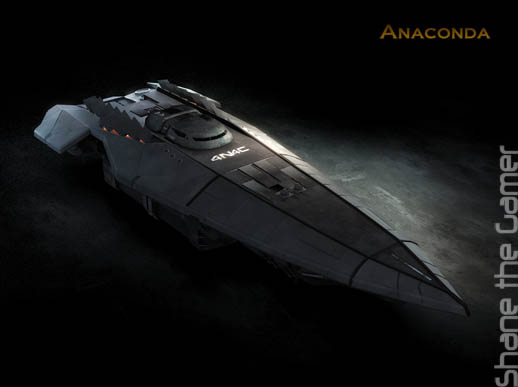 There are about a dozen or so pilotable ships in the game ranging from 24k to tens of million credits each. Each ship can be loaded out with thousands of different combinations of drives, scanners, armaments etc. The result is a hugely customisable game experience.

The lack of an external view is an interesting design decision and justified in the name of realism. At this moment in time Elite’s commanders are restricted to viewing the galaxy through the cockpit window, just as you would in real life.

The downside is that unless you are in the hanger, you don’t get to see your ship. Still, there are plenty of other ships out there to ogle at. 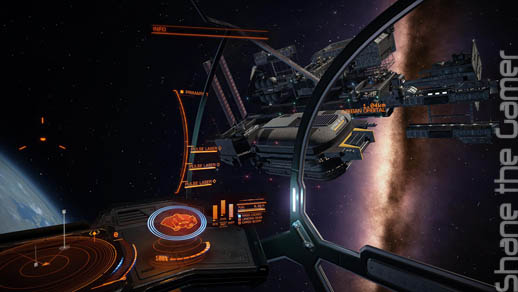 Elite: Dangerous is a beautiful-looking game, from the impressive star-fields to the intricate designs of the ships and stations. If I had to fault the visuals, it would be the poor implementation of anti-aliasing in the game which make some of the stations look a bit rough from afar.

The game’s sound deserves a mention. It’s epic and really aids immersion. From the roar of the ship’s engines to the chatter aboard stations, the developers have used audio to great effect. 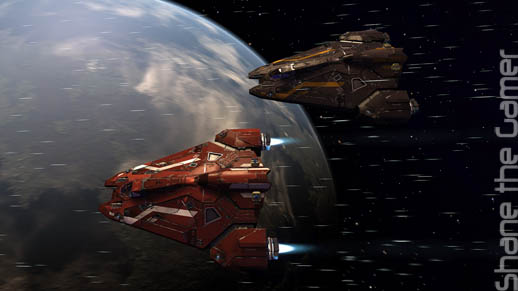 Elite: Dangerous has been a long time coming. It’s an ambitious effort and fans of the classic games will not be disappointed. The controversial online-only requirement may put some off, but it’s pretty cool to share the galaxy with other players.

New players may not fair so well with the game, especially if they are expecting some sort of arcade romp.

The game plays at a relatively slow pace, with some of the journeys between systems taking quite a few minutes. In fact the travel time is so long that on occasion I found myself browsing the internet whilst waiting. 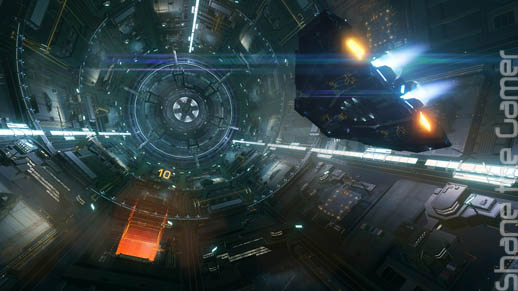 At the end of the day the game sets out and succeeds in recreating the sense of wonder that made the original Elite the template for the likes of Freelancer, the X series and even Eve Online to build upon.

It’s a game that does what it says on the tin and no more. It’s a good start, but I do believe that this is just the beginning for the rebooted Elite franchise.