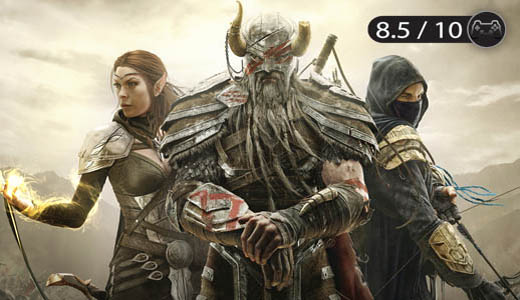 The Elder Scrolls Online is a first person MMORPG. It offers great visuals, sound, environments and enjoyable gameplay and plays well from any aspect, from first person to third.

There is plenty around the world of Tamriel to keep a player busy.

I discussed the initial gameplay aspects in Part One, now I delve deeper into the world of ESO. 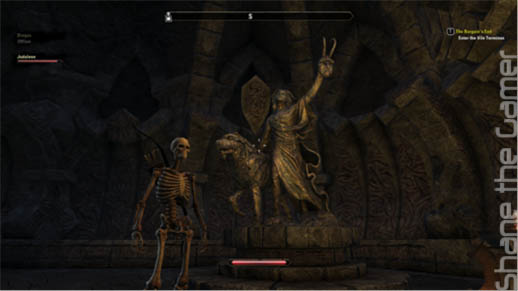 The Level up system keeps in line with and feels similar to that of many other MMORPG’s. Gaining a Level gives the player two points, one for attributes, i.e. Stamina, Magic and Health, and one for abilities. There is a list of general aptitude headings; Weapons, Armour, Crafting, etc. Each heading opening up to specialties, with their own passive and active abilities. It works quite simply, for instance the more you use the bow speciality the better you become at it and the more abilities you unlock for it. 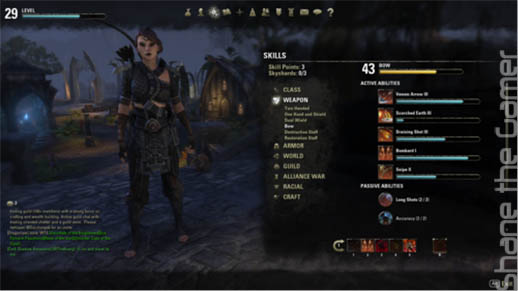 Crafting can offer, if you so choose to attempt, a lot to do. There are six crafts, each with its own skill line. Three of them being for armour and weapon creation. Unfortunately this creates some imbalance between class types. Classes like the archers and mages need to maintain two different crafts, one for armour, and the other for weaponry. Heavies on the other hand only need the one craft to accomplish both. To effectively master a craft, ability purchases are necessary, making it tough to take on more than one or two. Along with the numerous materials needed for each craft, all this makes a “Jack of all trades” a hard title to claim.

Overall though, I found the whole system to be well implemented. It’s fun and somehow doesn’t feel repetitive, it even offers some excitement. Gathering resources to bring back, refine and craft into some awesome equipment is a great feeling. Resources can only be found or haggled from other players.

Crafted equipment can be improved and even have bonus effects added through research. Different looks can be achieved through finding Motifs, which allow you to fashion amour and weaponry of a particular race style. Being in high demand, these are quite lucrative. So it’s easy to make a quick buck by buying and reselling these highly sort after items. 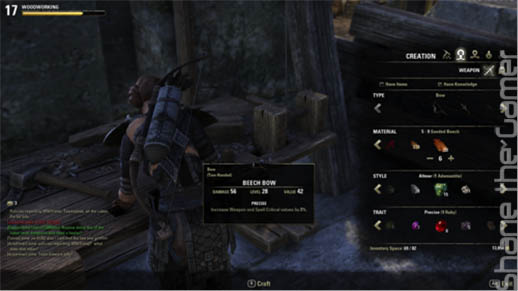 Whatever crafts you decide to pick up, inventory space becomes a problem very quickly. There is a bank system to help with this but collecting more than two craft material types can be a hard task. Cleaning out your inventory and bank becomes a regular affair. You can increase your bank and backpack space but it quickly becomes a costly business.

In previous Elder Scrolls games the Guilds have always been my favourite quest lines, more specifically for me, the Dark Brotherhood. So far only the Mages and Fighters guild are available. They offer interesting stories but can both be achieved whether or not you specialise in one or the other. I can understand why they would do this but it does take away from the experience. Going through the mages guild with never actually having to know any magic just doesn’t feel right. 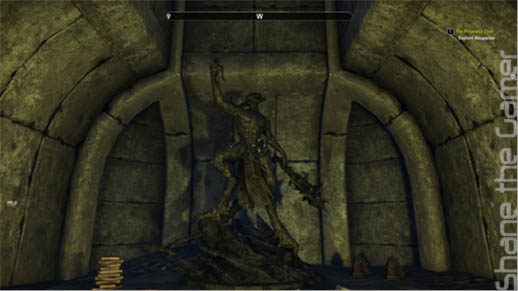 There are promises to later add the Dark Brotherhood and Thieves guilds. With a step backwards in the sneak department and stealing not even an option at the moment, I’m unsure how, if introduced, this will turn out.

Navigating the large expanse that is Tamriel has been made more convenient with the use of Wayshrines. These are littered throughout the world and once found on the map can be used to teleport to any other previously discovered Wayshrine. If you so happen to get stuck some where you can even teleport to them without actually being at one, but this is done at a cost. This makes navigating back and forth for quests much less daunting.

The other mode of swifter travel is the ever reliable horse. Compared to the last Elder Scrolls game, Skryim, the whole horse aspect has been done a lot better. No longer do you have the problem of forgetting where you left your horse or accidently killing it. It’s just a whistle call away and disappears just as promptly when not needed. You can increase your horse’s stamina, speed and your own carry capacity by feeding it. This is regulated so only one aspect can be increased daily. Having a horse definitely makes exploration and travel a more pleasant experience. 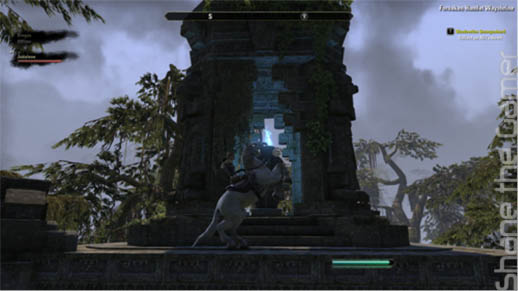 Every game, especially MMOs, has it fair share of glitches. ESO is no anomaly to this. For the most part I did not come across any game breaking glitches. There was a few dead bodies floating weirdly and I did manage to get stuck behind a statue where my only option out was to teleport to a way shrine.

One of the bigger glitches that I found disappointing was with some quests. With one quest, at first I couldn’t activate the right stones in order, then upon restarting the quest, got further only to find a quest character failing to appear, on restarting the third time, I got stuck in a prison where a storyline portal failed to appear. It’s fair to say I found this quite infuriating. The good thing is, moving on is always an option and you can just come back later when it’s been patched. 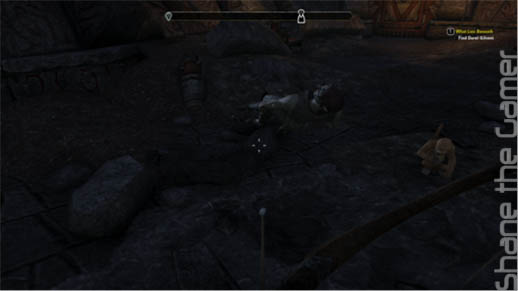 Player versus player is the big new thing to the Elder Scrolls series. So how does it work?

The basic set up has a Planetside 2 feel to it. There are three factions fighting for power. Each one attempting to claim forts and bases. There are items and equipment that can be purchased to assist in takeovers. Having team based strategy is the best approach. The end goal; domination and control of the map, in this case, the Imperial province of Cyrodiil.

This PvP aspect is separate and different experience from the rest of Tamriel’s game world. It has quite a few features exclusive to Cyrodiil. The exploration side still offers random side quests, resources, skyshards and areas. The main quests involve taking on the other factions in some way, shape or form. The real difference is taking on other players.

The best way to enjoy PvP is playing with a lot of other people. This can be hard to manage if you don’t pick the right time zone. It’s no fun if there just aren’t enough people on your server to really make any progress. Dying and running all the way back just to die again over and over and not actually get anywhere is not all that amusing. 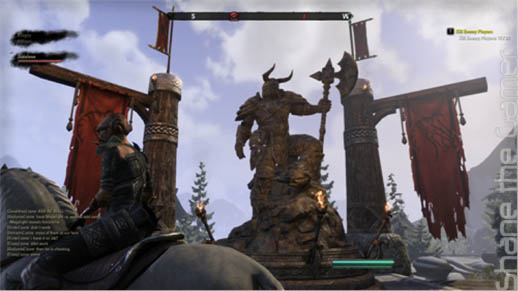 If you want to give this a go solo or with a small group, I wouldn’t recommend doing so until you’ve reached the max Level or are close to it. You are able to join from Level 10 onwards but it’s hard to really do much at this Level. Many of the other players both enemy and friendly seem to be of mostly max Level status. Along with all NPCs and creatures being Level 50, this makes the fight somewhat unfair and leaves you feeling like you don’t have much to contribute.

The Elder Scrolls Online doesn’t do anything ground breaking in the MMO genre but does provide a delightful and enjoyable game that you and friends can share adventures in. It is well polished and well thought out, offering something different to keep players engaged with every aspect of the game. It has its flaws but doesn’t every game? 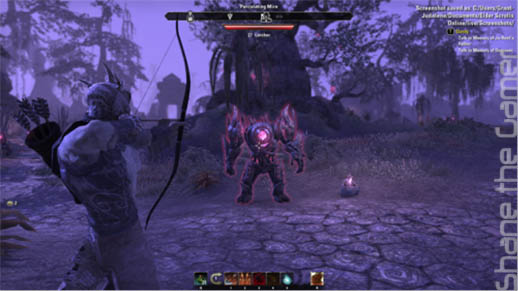 Here is an MMORPG that executes its ideas well and delivers an overall finely created game. For fans of the Elder Scrolls series it offers a great deal more. I don’t know if it’s worth quitting any other MMO you might already be deeply set in but if don’t have one or just want start fresh, I can highly recommend this Elder Scrolls Online to you.