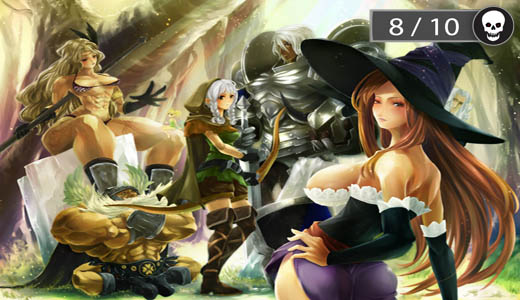 Being unfamiliar with both Vanillaware’s work and 2D action RPGs, when their latest effort Dragon’s Crown was handed to me I really didn’t quite know what to expect. I’m glad to inform you I was more than pleasantly surprised.

You start off where any adventurer would, in a tavern, and meet up with a thief master who has quite the skill and can unlock almost any chest. You progress from there to involve yourself with everything from saving the kingdom to collecting spider webs for the hot shop keeper. So really just your regular run of the mill RPG affair.

After choosing from a typical line up of characters, the game starts with a small tutorial giving you what you need to know while not making it feel too unnecessary.  You have six characters/classes to choose from.  These being a wizard, fighter, dwarf, amazon, elf or sorcerer; each bringing something a bit different to battle. 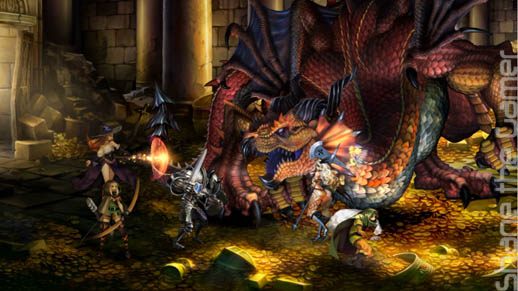 If at any point you have change of heart you can pick another character on the same save. This does however mean you have to start the story and character level from scratch. You are left with all your money and items previously obtained and can switch back to previous characters as well.

The story is entertaining enough and keeps you quite interested.  There are some attempts at twists with things here and there that try to throw you off. It was nice to see some effort had been made and the story-telling was so well done I didn’t mind the lack of deviation from comfortable RPG tropes. As far as voice acting goes there is really only one; a well-chosen male voice telling you what’s happening, what you might be doing and where you might be going. 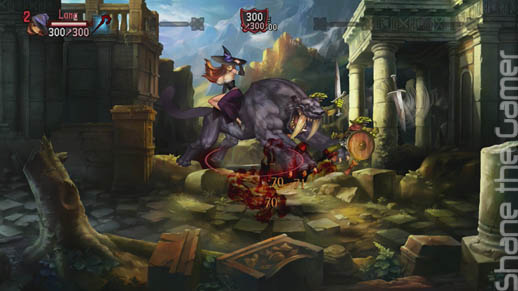 While this might sound cheap or maybe even lazy of Vanillaware, it was very well done made me feel part of the story being told. There did appear to be some ‘borrowed’ characterisations which had me feeling in a few moments I was in a Disney story, until the lack of clothing on characters reminded me otherwise.

Your character is improved by buying skill cards. There are two sets of skill cards for every character. One set specific to the character and the other a general skill set available to all. Levelling up and completing quests earns you points to spend on them. This skill card system was well executed; it didn’t feel lacking as there was plenty of choice. The higher level you want a skill card the more points you will need to spend on it; this giving you another good reason to go out and quest your butt off. 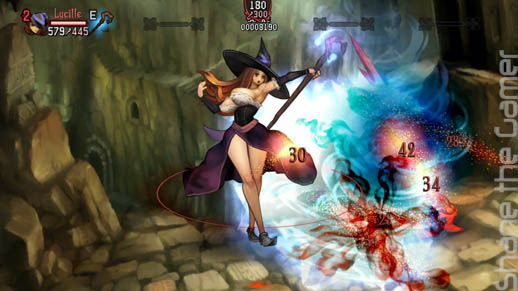 Although 2D, Dragon’s Crown has some depth to it. You can still run up and down to some extent. When fighting you do need to be on the same layer as the enemy for your attack to strike. Attacking can seem slightly complex depending on the character chosen. Choosing a mage has you trying to find a safe spot to manually regenerate mana so you can then get back in the action. Alternately, choosing skills that regenerate mana while fighting in close combat is another option. Being the archer type character, you have to decide when and how to use your bow as arrows are limited but can be picked up by defeating enemies. I found the combat enjoyable and required more than your regular button mashing as might other 2D games.

The art style is quite dazzling. It’s beautiful, aesthetically pleasing, detailed and outright enjoyable to interact with. Unlocking that extra art work among other things when questing is a reward in itself. The music is as impressive as the art style. It’s pleasant to listen to and really radiates the feeling the art was already portraying. 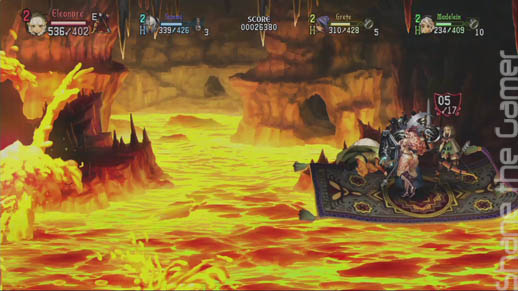 The world and levels uphold the beauty this art style has to offer. It is quite enthralling. I didn’t imagine a 2D world could take me on such a journey. The levels really manage to keep it interesting and even offer hidden areas and treasures. I found it lovely how clouds might roll by or birds might fly around. It really was something to just sit back and admire.

Something that may deserve a mention is the amount of clothing some of the female, both companions and in story characters seemed to be lacking in. In the end they were covered in all the right places, maybe not by much but still covered. So despite the several disproportionate and scantily dressed female characters I personally didn’t find this game offensive, as I felt the art style really is so gorgeous it was allowable. I could find a certain appreciation for it. I mean art is all about pushing social boundaries. 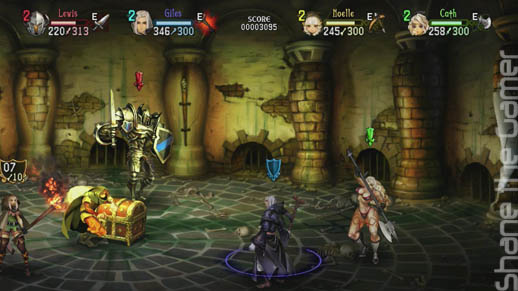 You set off from Town and always return between your rescuing and raiding. Here you can visit numerous places to fully prepare yourself for your next big adventure. Your first visit will be to the Adventures Guild. From there you unlock a few more places that you will frequently visit; The Items Shop, the Temple, the Magicians Lab, the Castle and the Stables. One of the better places to visit while in town is the Items Shop. This is where you can, after being distracted by the well-endowed shop keeper, repair stuff, buy new items, sell old gear and appraise newly found equipment.

Going through levels has you finding and picking up bones of dead adventures gone before you. On returning to Town, going via the Temple may use the bones to revive them. They show their gratitude for restoring then to life by becoming available to join your party. You can have up to three characters join you. Reviving a character costs a bit of money and each character is set at a certain level. 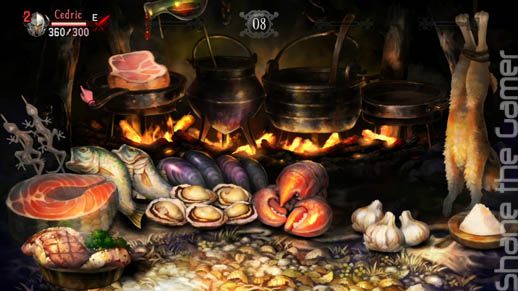 As you progress, higher level characters are unlocked. The game is also local co-op. So playing with your friends on the couch is something this game offers that few other RPGs do. It does have an online ability as well, but this is only available after you’ve made it up to a certain point the story. I definitely found playing online with others rather enjoyable.

I do love fighting alongside companions, but doing so made following my character during battle a lot harder. There is just so much going on sometimes that you are more than likely to lose your character mid-battle. I found this annoying but not overtly impacting on gameplay. 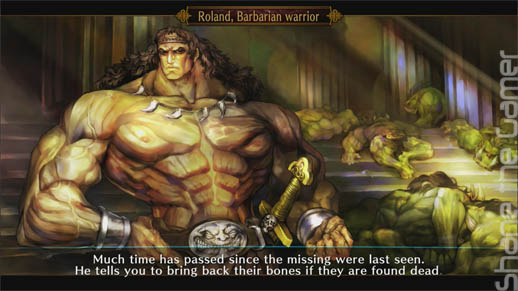 New equipment is gathered during dungeon exploration. Stats of these items are hidden and need to be appraised for a price for them to be revealed. Luckily they do provide you with a rank on the item so you have some idea if it’s worth the trouble.

I didn’t seem to find any lack for detail. Continuously attacking civilians around town will get you sent to prison. While knocking over a man with a bushel of apples will see him pick up all the apples before he continues on. If you happen to stand around for too long you might see squirrels run around your shoulders or your character give a cheeky jiggle. Even running is unique for each character. I just loved watching this game. 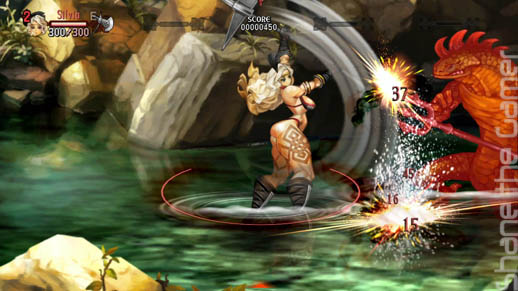 So between questing, story, upgrading, resurrecting, co-op, online and getting generally distracted by the sensually gorgeous art style, Dragon’s Crown does have a decent lasting appeal. There seemed to always be another quest the moment you finished one. Setting off to complete level after level with no respite is a great challenge.

Maybe I’m a bit too artsy but I felt Dragon’s Crown delivered in all the right areas. Gameplay was enjoyable. Story was entertaining. Aesthetics were quite the win. There was more than enough side boob for any nerd to enjoy. Some might find fault with this but really you just need to take it for what it is- a game. There are just too many games that push every boundary under the sun to sit back and pick on this one. I initially believed that 2D games with all its limitation couldn’t deliver this much but I really I would be lying if I said I didn’t have a great time. If all 2D action RPG’s followed this formula, I’m their new biggest fan.