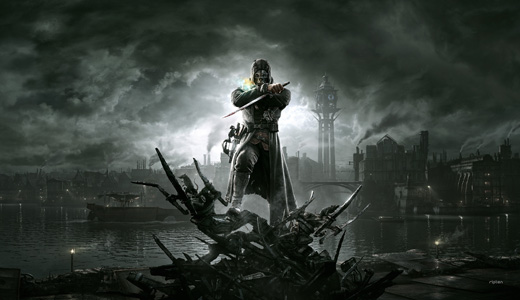 It’s hard not be immediately sucked in by the vibrant and interesting steampunk world that Dishonored throws you into. Unlike so many narrative focused games, it certainly doesn’t waste any time.

It immediately establishes a basic outline of the story, what your role is it and the world it takes place in, before letting you loose to cause a bit of chaos.

You play as Corvo, the Lord Protector to the Empress, who has just returned from a mission to try and find a cure for the plague that has been ravaging the city of Dunwall. 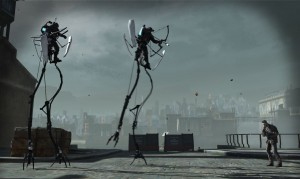 timing is a little off, and he stumbles into the midst of a political assassination, and the kidnapping of the rightful heiress to the throne. Being at the wrong place at the wrong time sees Corvo framed for the murder, and sent off to prison at the design of a pair of very corrupt government officials.

The best solution to the predicament Corvo is in? Revenge against those who wronged him. To carry out this vengeance you’ll be armed with all manner of weapons and a range of magical abilities that quickly make Corvo a force to be reckoned with.

But how you get that vengeance is up to you, as Dishonored effortlessly blends the best of a typical shoot-’em-up with excellent elements from stealth games. 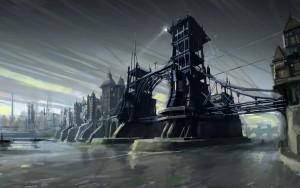 As you make your way through the cobblestone streets of the steampunk Dystopia of Dunwall, you’re given equal opportunity to go in guns blazing, or to take a more silent approach. The same area could be tackled equally effectively by  bursting into a room, hacking limbs off hapless soldiers and blowing them apart with incendiary crossbow bolts, or by sneaking around in the shadows, subduing soldiers with sleep darts and chokeholds.

However you choose to carry out your vengeance, the fantastic dual-weilding mechanics and excellent control scheme make Dishonored a joy to play.

You’re never left wanting either, as you’re constantly offered a range of side-missions and bonus quests to boost the vast and interesting range of otherworldly powers Corvo has access to. And although the game can be a tad difficult at times, the range of options you’re given to tackle each situation never leave you wanting to hiff your controller away in frustration. 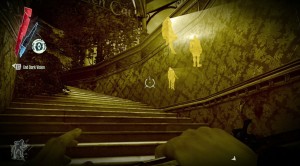 find yourself replaying certain rooms a few times over (which sort of feels like the challenge rooms in Arkham City), trying to find the best route possible.

The game also ties your action to a solidly put together morality system – killing too many people may be quicker and easier, but will lead to a more fearful city and more troublesome roaming packs of diseased rats.

Usually, when a game tries to do too much, the overall package can suffer, and be vastly less than the sum of it’s parts. 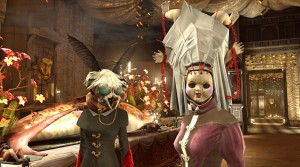 Dishonored has a lot going on at any given moment, but the range of plot points and mechanics never feel awkward or overwhelming. There’s a definite Bioshock vibe here (which certainly isn’t a bad thing), in both the grim, somewhat doomed aesthetic of the games visuals, and the gameplay itself.

Scrawled messages from desperate citizens are crudely etched on walls, old audio recordings and a very familiar ‘safe with a hidden combination’ mechanic make you feel that Corvo wouldn’t be that out of step down in Rapture – especially with his ability to hold a gun in one hand and use magical powers with the other. With that said, it fits perfectly here, and feels more like a fitting inspiration than a rip-off.

Artistically, Dishonored is a masterpiece. 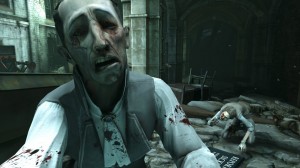 suitably tense and creepy, and the grim minor details really come together to create an impressive visual experience that makes the game feel more like a work of art than a video game. Technically speaking, however, the game is slightly less impressive.

Having seen footage of the game in the lead-up to the release, I was somewhat put off my some lack lustre textures throughout the game, which really prevent the locals from being everything they could be. Excellent and creative artistic designed is slightly spoiled by faux-looking textures, and I found that even installing game on the Xbox 360 itself  – at a rather ample 5G of space on your hard drive – didn’t seem to help. 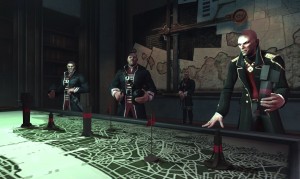 It’s a small quibble for a game of this size and quality, but one that’s difficult to miss when compared to other high-end FPS’s like Bioshock and any of the more recent Call of Duty’s.

The compelling audio in the game almost manages to completely make up for this, mind you, with well-timed sound effects and minute aural details adding to the overall theme of the game at large.

Dishonored is a rarity in a modern, AAA title in that it actually lives up to it’s hype.

Excellent gameplay, a brilliantly crafted story, interesting visuals and a really solid cast of voice actors make it easy to call an early Game of the Year candidate.

If you’ve not had the chance to have a go with Corvo yet, I’d suggest you do so as soon as possible. 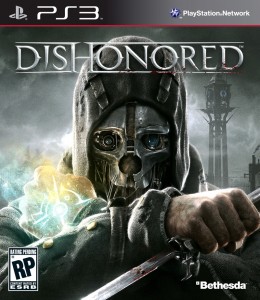