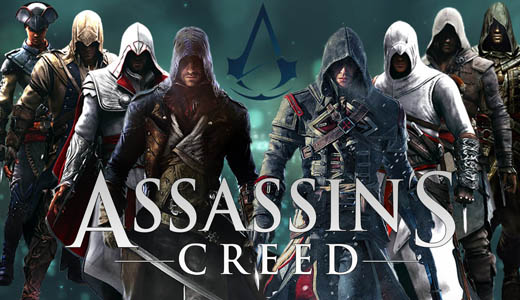 Both games are out on the same day so fans with both new and last-gen consoles have some tough decisions ahead!

With Unity upping the ante with some stellar visuals, and take it from me- they are stellar, it would be easy to overlook Assassin’s Creed Rogue on 360 and PS3.

But it would be foolish to do so. 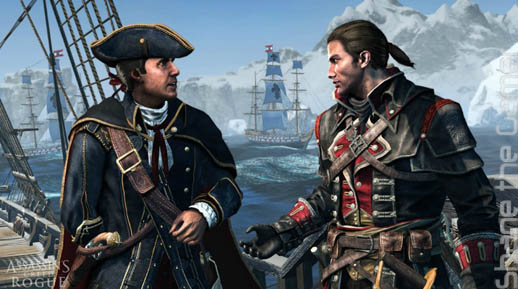 For the last seven years, and across seven games, we have followed members of the Assassin’s brotherhood as they have battled against the Templars. In Assassin’s Creed Rogue, for the first time, we get to witness the centuries-old conflict through the eyes of a Templar as he hunts Assassins. 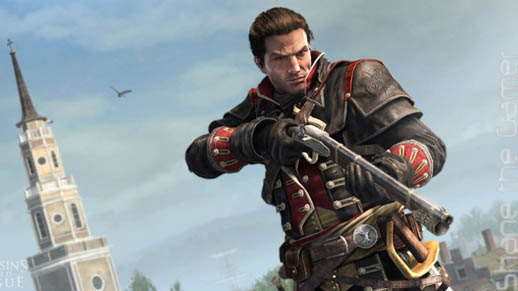 Darren: Back in Australia again.

Darren: With another nautical-themed Assassin’s Creed. 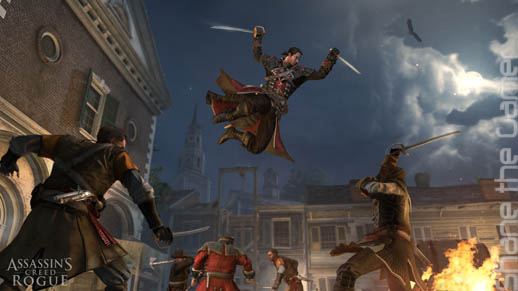 Darren: So this time we are swapping sides and playing as a Templar. Now, how will Assassin’s Creed Rogue affect the series’ dynamic, what with the Templars traditionally being portrayed as the series’ bad guys?

Michael: Well, I think that’s the thing that makes it really interesting. It’s kind of a grey area, isn’t it? You’ve been seeing the franchise so far from the Assassin’s point-of-view and maybe it made it seem like the Templars are the bad guys. But this time you are going to see things from the Templar’s point-of-view and you may have some questions in the end. You are going to have to decide for yourself who you think the good guys and the bad guys are. 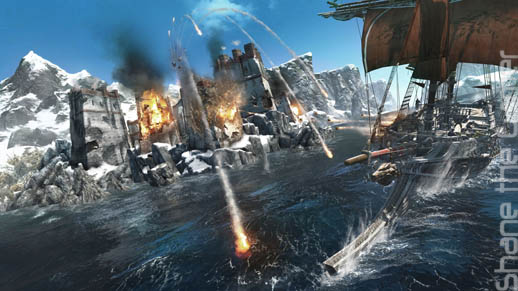 Michael: Well, I think in a lot of ways it’s going to be similar to Black Flag. There’s a lot of features developed for Black Flag that we are kind of taking to the next evolutionary level in Rogue. Things like the naval combat- we’ve made it more dynamic. We’ve basically made it better to play and more fun.

One example of the new navel combat features is the Puckle gun, where you can have an automatic machine gun on your ship, you free aim with the right stick and can use it to destroy weak points on the enemy ships. You’ve also got burning oil that you can leave behind you in a line. It sets the enemy ships on fire, giving you more strategic options in combat. And it’s just a lot more fun. 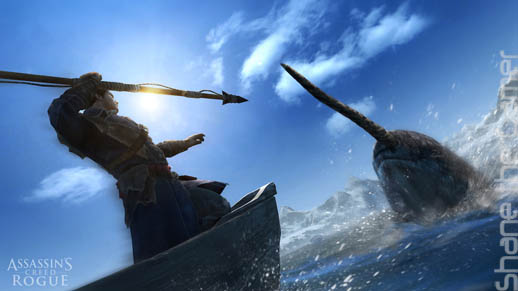 Darren: I played Rogue at the EB show in Sydney last month and the naval combat did feel a lot more fluid. I don’t know whether that was just because it’s been a long time since I played Black Flag, but certainly I was straight in there, getting results and that was pretty cool. Why is this game not coming out on new-gen consoles? It just seems a shame, you know? 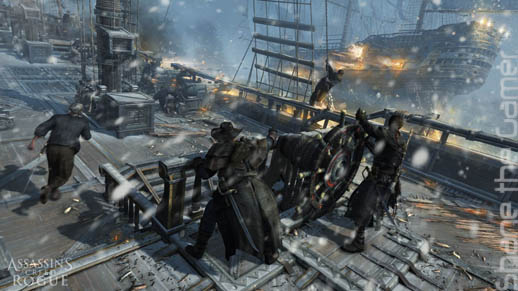 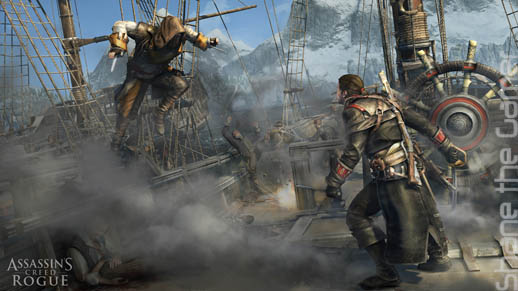 Darren: So it’s more of an offshoot, or an epilogue to what we’ve seen before?

Darren: That sounds good. I assume that having two Assassin’s Creed games in one year is just a special thing for this year or is this going to be the norm? Are Ubisoft going to try and outdo Activision?

Michael: Honestly, all I can say is that I can’t really speculate on the future of the franchise. I think that this was the right thing for us to do this year, but I can’t speculate any further. 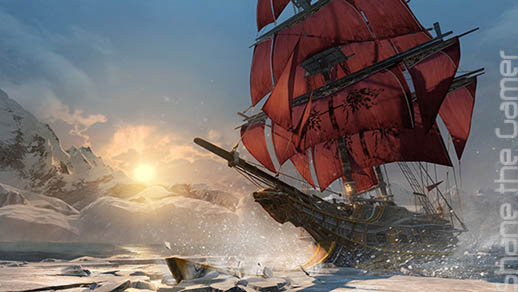 Darren: I’ve got to get some sleep, you know. So does anything in Rogue tie-in with Unity?

Michael: Absolutely, there is a mystery in Unity that you will only know the answer to if you play Assassin’s Creed Rogue.

Darren: It’s nothing to do with that WWII trailer from yesterday morning?

Michael: I can’t give you any information other than to say if you complete Assassin’s Creed Rogue you will find an answer to one of the mysteries. 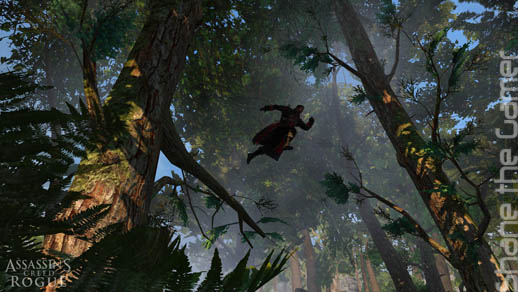 Darren: Very cool. Does Rogue advance the modern-day story at all? 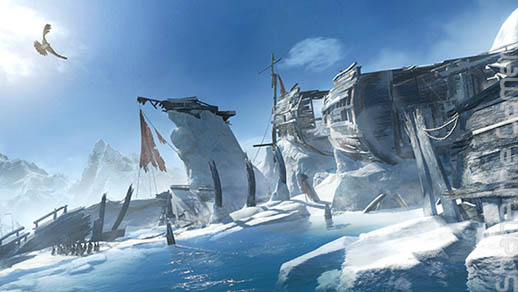 Darren: Finally, now, what part of Assassin’s Creed Rogue are you most proud of?

Michael: Well, if I can say two things. I am Lead Game Designer and I was leading the team on the North Atlantic world. The North Atlantic is an amazing place with all these ice ingredients, like icebergs that you can destroy. When you destroy an iceberg it creates a ripple wave that can actually take out enemy ships like schooners and gunboats. It’s got ice sheets, so you can use an ice-breaker ram to break through these ice sheets and explore long lost areas. There’s also ice walls, blizzards, snow tornadoes and all kinds of crazy weather and stuff. I’m very proud of that. 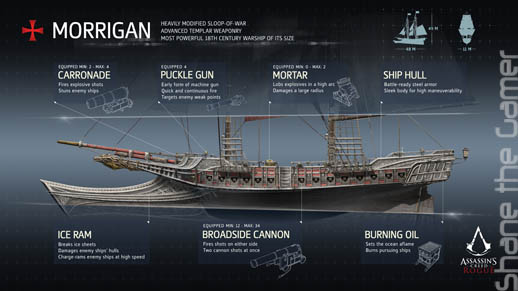 I’m also very proud of the new ship that we have, it’s called The Morrigan; it’s a sloop-of-war and it’s got those new weapons that we talked about earlier. And it’s so much fun to sail. So the naval combat and the North Atlantic world are two things that I’m most proud of.

Darren: Excellent. Well I’m certainly looking forward to playing it. I just loved the naval combat in Black Flag and I’m keen to get back on the ocean for another go at it. Thanks ever so much for taking the time out to talk to me and best of luck with the game.

Michael: Thank you, I appreciate it. 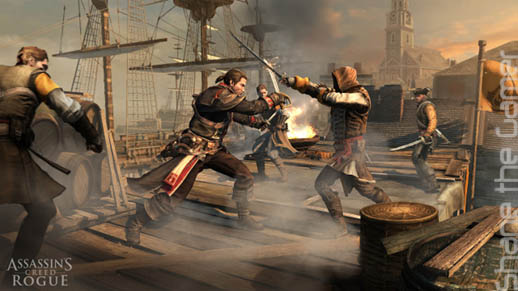