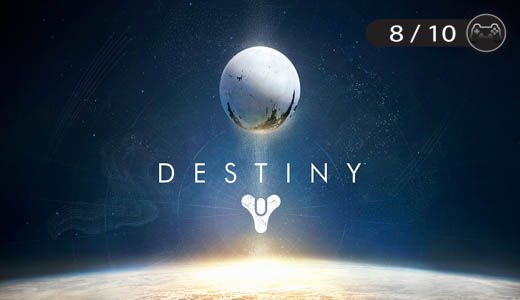 Finally playing one of the most anticipated games this year, Bungie’s Destiny, had me ambivalent on many levels. Destiny can currently be found on the PS3, Xbox 360, PS4 and Xbox One.

It can’t really be defined by one genre as it takes aspects from many. Having a game be so indecisive can make judging it a bit difficult. How do you do it? Do you compare it to MMOs, FPSs or RPGs when it is in fact exclusively not any of these?

Where to start? Destiny begins similar to a RPG. You choose a race then a class and so begin your journey. In this case you’re brought back from the dead… now this sounds familiar.

Where I have I seen this before? Ah yes, Kingdoms of Amular, Mass Effect 2 and Elder Scrolls Online, to mention a few. 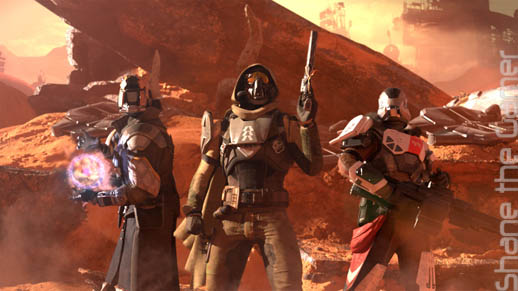 Including a generic start, Destiny has a fairly large collection rather ambiguous bits and pieces.

The Darkness, the Traveller, the Speaker and of course the Guardians all fall into this.

It’s hard to fully respect the concepts thrown at you concerning each when there is so little of it that is being thrown. None of these aspects seem truly tangible. This makes it hard to form a connection with anything the story provides us with. 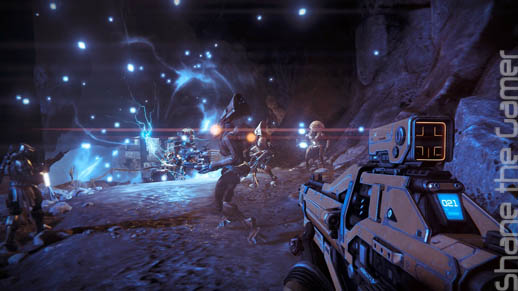 This aside, the universe is interesting.

The Traveller is a mysterious orb that has helped humanity prosper beyond imagination. This sentient being has an enemy of its own that chases it across wide expanses of the universe, the Darkness. While the Traveller is the catalyst for humanity’s exceeding prosperity, it is also the cause for its ultimate and impending destruction. 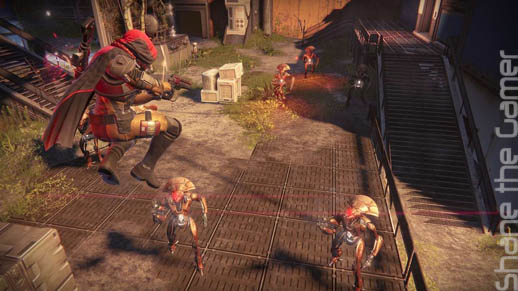 While certain aspects are interesting the overall layout of this universe is open to many questions.

The story doesn’t really fill in many blanks either. Speaking of such, the story also fails to fill the grandiosity that the tone of the universe sets up. It also doesn’t seem to be headed in any particular direction. One minute you are collection information, the next you are running around killing things to get somewhere to gather more information on something. 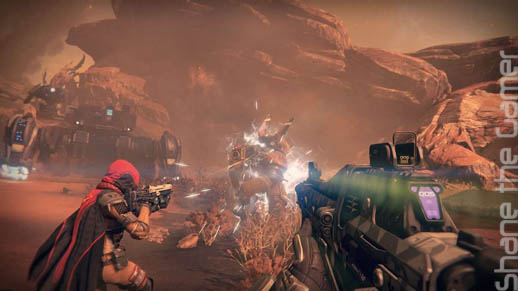 The few characters that are introduced only have brief contact with our hero and fail to make an impression. By the end of it all I was still unsure exactly what it was I had accomplished.

Apparently Bungie intends for at least three sequels to Destiny, so hopefully these future sequels can offer a more meaningful and informative tale. This said, it isn’t really an excuse to offer a short and non enticing story in the first place. 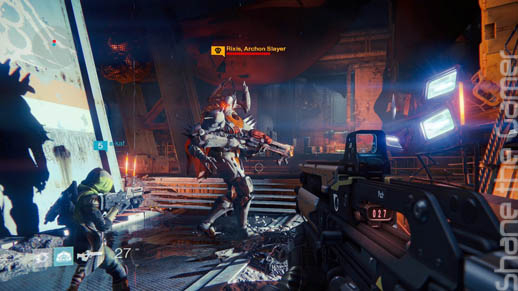 The worlds and environments you travel through, on the other hand, are gorgeous and detailed, offering a large amount of beauty and variety between Levels. There are a few broad expanses and the Levels do reach on for quite a bit. These are easily navigated by unlocking a hover bike that makes traversing the expanse just as enjoyable as looking at it.

When on the ground the game turns FPS, with the basic gun types at your disposal and a few extra elements specific to your class. Having a special light gun or warp grenade adds a level of diversity to characters and gameplay especially when playing alongside others. The guns are fun and the overall layout is easy to use. 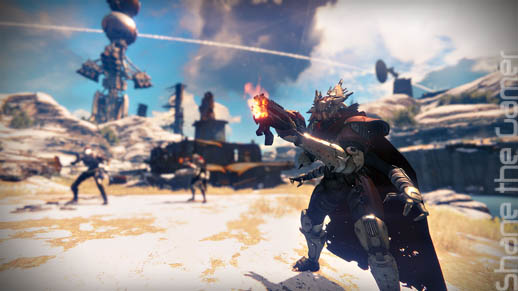 Both equipment and guns, depending on rarity, can be upgraded to some extent. This aspect isn’t complex in nature and makes it seem effortless to upgrade items. I disdain overly complicated equipment upgrade systems that just make the idea more tedious than enjoyable. The inventory management system is simply eloquent. It is easy to navigate and accessible. Destiny manages the balance and maintains a fun simplicity in this regard.

The gameplay becomes slightly different when returning to your home base, the Tower. Here you run around in third person. You can buy weapons, armour and items or collect rewards for missions. There are also bounties to be accepted and cashed in, earning bonus XP for players. 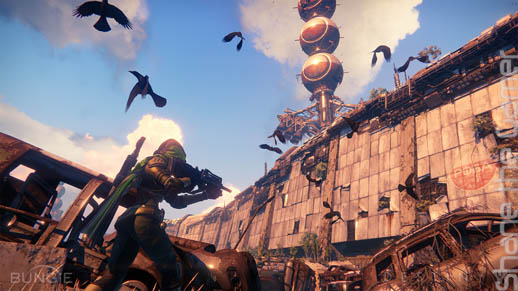 Leaving the Tower and going into orbit will bring you to a ship screen where you can then choose a destination and mission.

The solar system map is easy to circumnavigate and user friendly. Each planet or moon consists of one very large map and each mission on that planet/moon will take you through a different part of it.

There is also the option to roam the entire area freely and do mini missions. This offers an open world feel. After unlocking a planet you are generally free to jump between them as you like taking on the mini missions and fulfilling bounties. 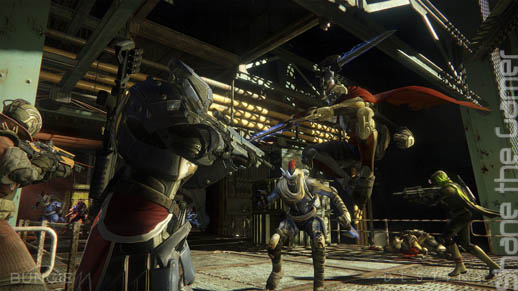 It’s interesting and slightly odd that a player can break through the soft level cap and never finish the main story. Player versus player, bounties and strike missions offer enough bonus XP to reach this cap easy enough. This then leaves you with the opportunity to breeze through the story.

There is an option to up the ante before beginning a Level but then this is up to player discretion. 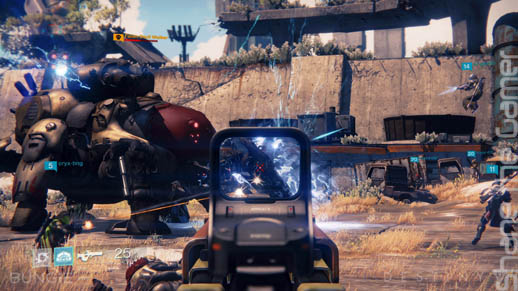 You can also let higher level friends tag along making life a lot easier. This is good and bad. It’s frustrating if you need all to be at the same level to game together but having a higher level friend along for the ride can take away some of the challenge.

Playing without friends though is not a fun option. There seem to be an ample supply of enemies. They both appear and respawn in hordes. By yourself this can be tedious rather than challenging but with a few friends it is pleasantly entertaining. 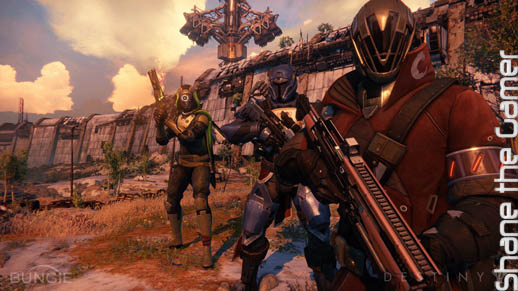 The strike modes are sections that force three players together to complete a usually hard mission with a harder final boss battle. These can be played whenever the need arises and difficultly can also be increased for challenge obsessed players.

Your characters level, weapons and equipment carry between side missions, story and PvP. This does leave a rather unfair advantage for lower level players in PvP and there doesn’t really seem to be any match making system to fairly sort this problem out. If there is one, it’s not very good. 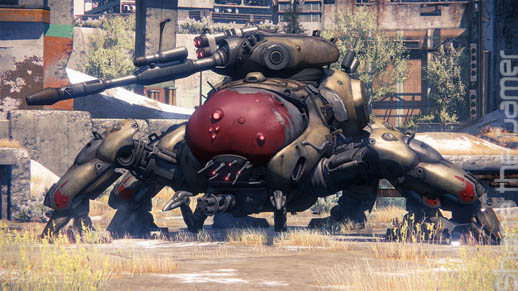 PvP has all the regular multiplayer online modes, death match, capture point and the like. The maps are varied and big enough to make battles engaging. It is quite fast paced but with unique character abilities and skill sets and maps that seem to accommodate particular weapons better keeps things fresh enough.

It is different as games go but lacks a bit of vigour when it comes to the story. It captures reasonably well a few elements we enjoy from various genres and pulls them together in an orderly fashion. This an experience that is better shared with friends. 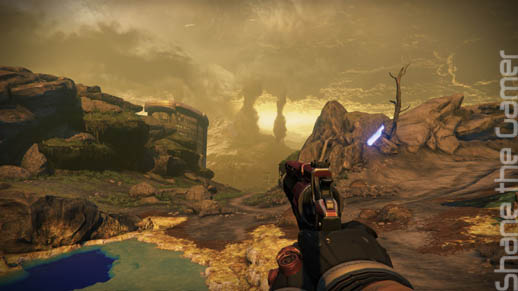 Nothing in this game is unnecessarily complex and in its simplicity delivers fun that does not take time and effort to fully understand or figure out. I never found it too simple and it never bored me.

So where many games over complicate to make things more ludicrous than they need to be, Destiny sparsely takes basic but usable ideas from various games and genres to gives a simply fun game. 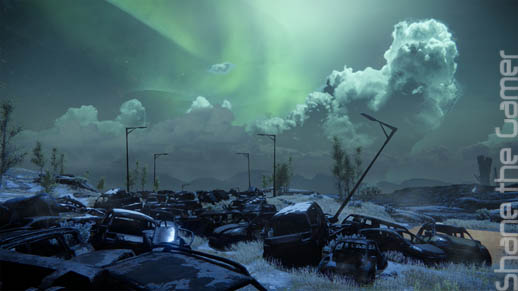 Many might nit-pick and possibly expect more than a game of many colours can adequately offer in any one department. It’s not a great MMO, an elaborate RPG or a revolutionary FPS but it is all these things in moderation to still give a game worth playing.