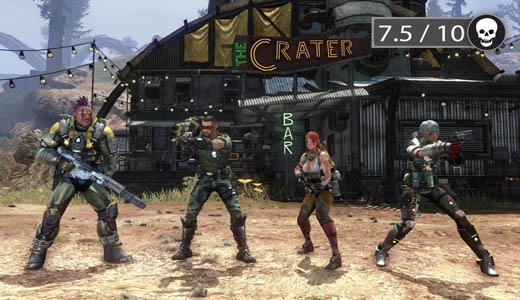 The cross-platform, massively-multiplayer online game was released a week before the global premiere of Syfy’s thirteen episode Defiance TV show.

The story for both the game and the TV show is set several decades after the arrival on Earth of an armada of alien refuges. Fleeing the destruction of their solar system a number of alien races, collectively known as the Voltans (after their home system Voltan is in the Perseus arm of our Milky Way galaxy), traveled across the heavens frozen in suspended-animation aboard huge Arkships. 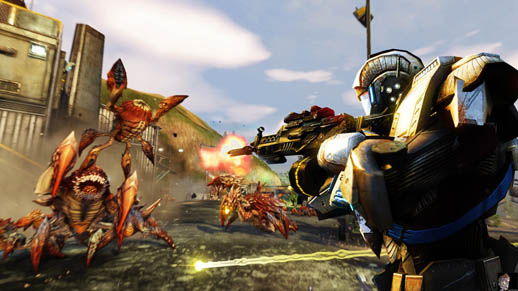 Believing the Earth to be uninhabited, the Voltans are instead met by a naturally cautious human race. Fearful of the implication of millions of alien immigrants, only a limited number of Voltans were allowed to settle, the rest waiting asleep in orbit. After ten years of debate, war broke out between the alien races and the humans.

The war lasted seven years, ending with the mysterious destruction of the orbiting alien fleet. As alien terraform technology, Arkship wreckage and other alien animals rained from the sky, the planet was forever changed. Mountain ranges rose, ravines formed and a host of new and dangerous creatures roamed this mutated Earth. In order to survive the humans and aliens formed an uneasy union. 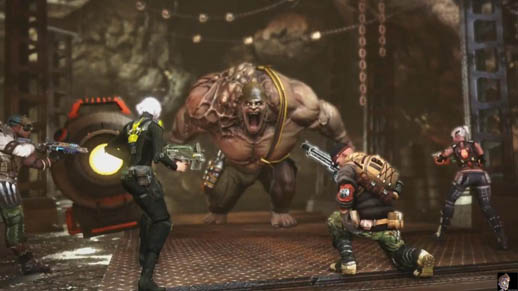 Sixteen years later and the ring of alien debris from the derelict fleet still orbits the Earth- the Arkbelt (look for it in the game’s night sky). Every now and again a piece of wreckage breaks orbit and plummets to Earth, an Arkfall. On the surface scavengers known as Arkfall hunters, seek out the alien debris hoping to find their next payday. The game places players as one of these Arkfall hunters.

Defiance is different from the usual Xbox 360 game in that is it an internet-only multiplayer game set within a persistent universe shared with other players. Commonplace on PC, the idea of playing this sort of game on a console game is quite a novelty. 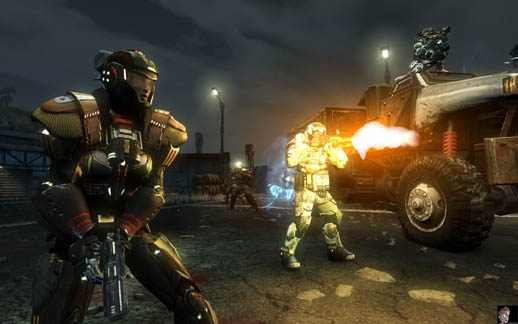 The game starts with the player aboard an Earth Republic Stratocarrier transport ship. Also on the ship are the TV show’s Joshua Nolan and his alien companion, Irisa Nyira. Whilst this made sense a week before the show started, with players interacting with the stars of the TV show during special pre-show adventures, it makes little sense now. The TV characters are in St. Louis and the game is set in the San Francisco Bay area; still it does serve to establish the shared world.

As is the norm with MMOs, the first thing that new players need to do is create a character. At launch there are only two races to choose from. Players can pick either gender from a choice of human or Irathient as well as their character’s origin (i.e. class) and physical appearance. 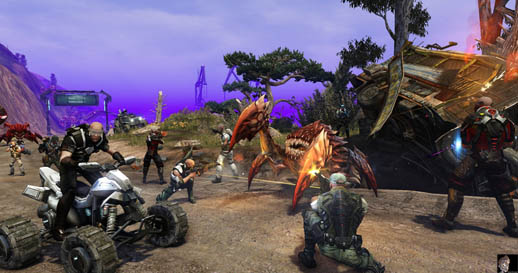 With your character defined, the transport is attacked and you end being ejected to the surface in an escape pod; where you are found by a savaging Irathient woman called Cass. At this point your Environmental Guardian Online implant, which serves as your interface with the world of Defiance, switches on.

The EGO implant grants your character with a special ability which forms the basis of you skill advancement.  On offer is a short term invisibility perk, a decoy for drawing enemy fire, a high speed melee ability or a weapon damage boost. 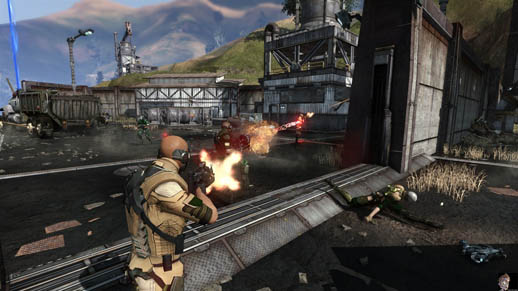 With the help of Cass, who serves as both guide and partner, players are introduced into this strange and vast world as well as the game’s mission structure. There’s a lot to do in Defiance and you could get by with just the main missions, which propel the game’s story via fairly interesting plot-driven challenges.

As well as the main story missions there are a host of optional side missions littering the game world to get distracted with. These include random calls for help, vehicle-based time trials and episode missions- which tie into the TV show. 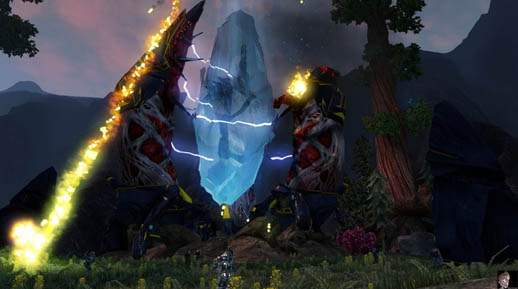 There are also Arkfall events, which can occur at any time. These special events begin with streaks across the sky as debris from the Arkbelt break through the atmosphere; with the main chunk getting highlighted on your heads up display. The Arkfall will be guarded by a boss that’ll require some help to defeat. There are usually plenty of other like-minded players at the site to assist you; with the XP and loot shared amongst everyone. This same approach also happens during other missions where players co-operate; the formal need to group being unnecessary.

Whilst it does have all the trapping of an online role-playing game, Defiance is a third-person shooter at heart. It’s not as sophisticated as your Call of Duty games, but it works well for an MMO. There’s good variety of weapons and upgrades as well as shields and other equipment to keep things interesting. 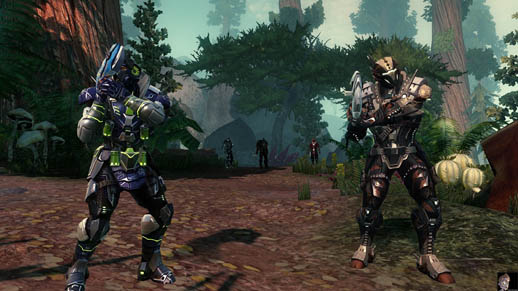 For players seeking a more traditional multiplayer experience there’s the arena-based six-vs.-six team Deathmatches and 64 vs. 64 domination-style games called Shadow Wars. Matchmaking for these game modes can be entered at any time and reward players with XP and cash that transfer over into the main game.

The game world is vast and I’ve only explored a tiny piece of it in the few weeks that I’ve been playing. Throughout the game world there are the ruins of the old world surrounded by the flora and fauna of the new. Homesteads, outposts and farms dot the landscape offering supplies and missions. In between there are plenty of nasties waiting for the unwary traveler. 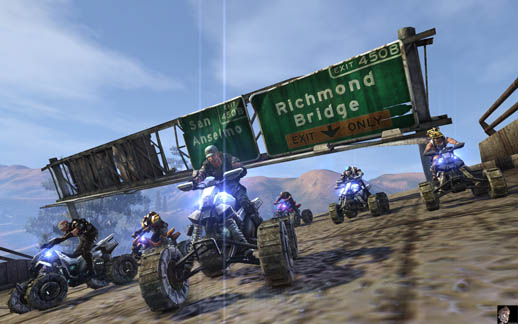 In my travels I came across plenty of burrowing Hellbugs, which range in size from that of a large dog to the size of a house. There are also mutant soldiers, unfortunate remnants of a bygone war driven mad by roaming the hostile wasteland, which will attack on sight.

With a world as big and dangerous as Defiance’s, thankfully, you don’t have to get about on foot. The developers have been kind enough to provide players with a vehicle pretty much from the start. These handy ATVs spawn beside players at the touch of a button and can be driven just about anywhere. They are also great for mowing down bad guys. 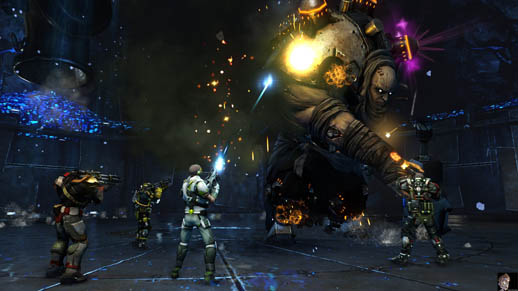 There’s a lot of game to be had in Defiance. If you are on a tight budget, and enjoy the Sci-Fi setting, Defiance could keep you going for a very long time. Apart from the initial purchase and a Gold subscription to Xbox Live, Defiance is free from the monthly subscriptions that once plagued MMOs. Instead of these monthly fees, the game features micro-transactions similar to the plethora of free-to-play MMOs available on the PC.

Micro-transactions allow players to purchase, using real money, boosts such as extra inventory slots and equipment. I am a little cynical when character advancement can be purchase as opposed to playing the game. It is, however, a sign of the times and the reason that we can enjoy such a decent game at such little initial cost. 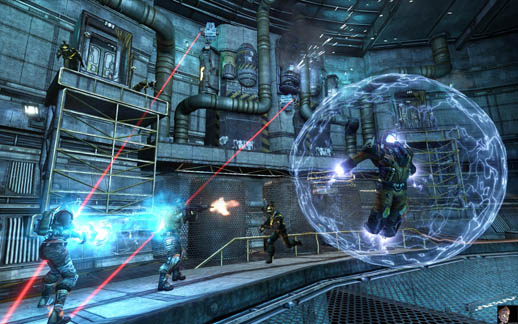 The game requires a compulsory 10Gb installation that could be a problem those with full drives or those that had only 20Gb of storage to begin with. As is common with persistent online games, Defiance is forever being updated. These fixes and new content, often necessitate patch downloads that are considerably larger than your average Xbox 360 game updates.

The main issue that I had with Defiance was with the game’s visuals. It’s not a pretty-looking game at all. Sure, there’s a lot going on, but it seems that the developers have made no attempt to optimize their game engine for the Xbox 360. The world, especially in the newbie area, looked washed out and a bit empty. Later out there’s a bit more vegetation, but it is still not up to the standard of other recent Xbox 360 releases. 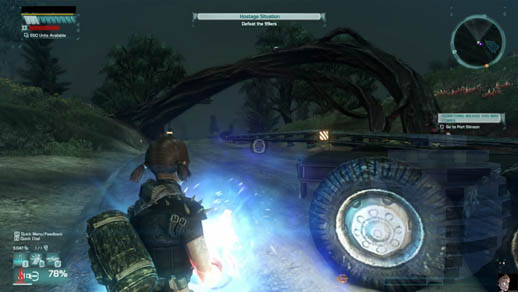 Defiance is a one of a kind novelty on console, being an interesting and mature MMO with a decent Sci-Fi premise. How it develops remains to be seen. Whilst I can see the game garnering a following on the PC, I’m hesitant to invest a lot of time in a game that risks being abandoned on the current generation of consoles when the new ones arrive later this year.

Right now the game offers Xbox 360 gamers a great opportunity to experience the fun, addictive and occasionally frustrating gameplay of an MMO without the need for a PC or expensive monthly subscriptions. If you like multiplayer shooters and enjoy a decent bit of low-brow Sci-Fi, you could do worse that take a punt on Defiance.