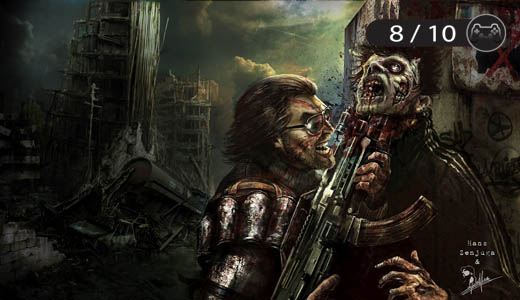 From the team at Housemarque, the same people who brought us Resogun, Dead Nation has always been a game that flew under the radar. With its release now on the Vita, you can kill zombies any time of day, anywhere you like.

Having already gained a cult following on PS3, and a boost later from being released on PS4, its clear that both Housemarque and Sony think the game is worth our time.

The translation to Vita is almost seamless, with the same eery atmosphere and moments of shock sewn into each Level. Its fantastic to see so little sacrificed, with the same number of enemies and same level of detail represented in the Vita’s iteration. One of the greatest highlights of the game is the satisfaction from mowing down a swarm of zombies, then stomping over their remains once you’ve finished. 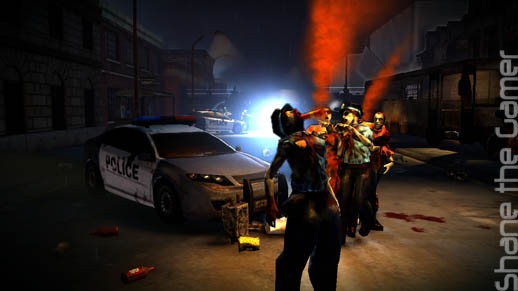 These moments of accomplishment and the relief felt when you survive an encounter are in no way diminished, and still feel like victories well earned.

The biggest complaint found with the Vita version of Dead Nation has to be in the controls. While the dual analogue stick on both Dualshock 3 and 4 controllers allow a lot of control and finesse when aiming and moving, unfortunately the shorter and more compact sticks on the Vita system do not. 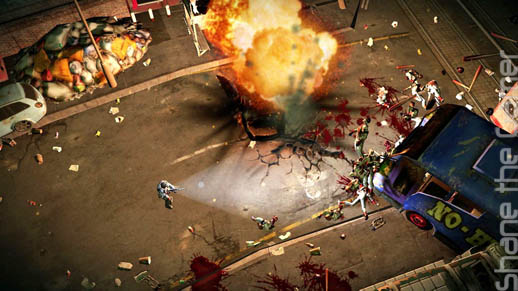 Moments that require precision become frustrating, especially when ammo and health are already such scarce resources. This isn’t so much the fault of the game as it is the hardware, but it does result in moments where you’ll survive a swarm of enemies only to be taken out by a single runner you just couldn’t aim a shot at.

Sound throughout the game is still deliciously full of gore and playing with headphones is strongly recommended. 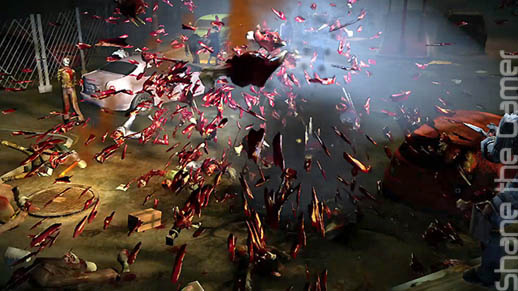 Moments of silence are perfectly broken by the sound of a door being flung open or a guttural growl indicating where and when your next enemy will appear. Visually, the ambiance is still fantastically grim, however the darkness of the game’s world can often be the bane of such a reflective screen, necessitating the brightness be cranked up, or staying away from bright light sources.

Ad hoc co-op is well thought out and maintains the tethering of players to the same screen space like in both PS3 and PS4 versions. At first this can feel unnecessary and frustrating since the need to keep players on screen is no longer a requirement now that each Vita player has their own display. 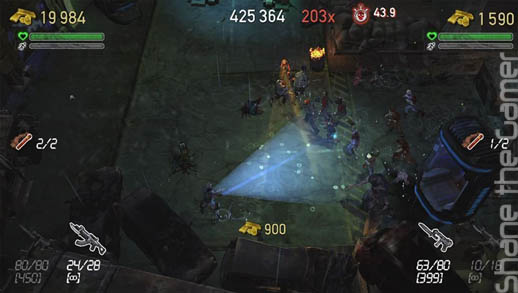 Co-op gameplay can at times result in the feeling that your fellow player is slowing you down or allowing you to explore at your own pace.

However, given the survivalist tone of the game, tethering also makes a lot of sense and allows for some fantastic moments of teamwork and communication. After all, how many people make it through a zombie apocalypse when they ignore the basic rules and split up? Stick with your buddy. 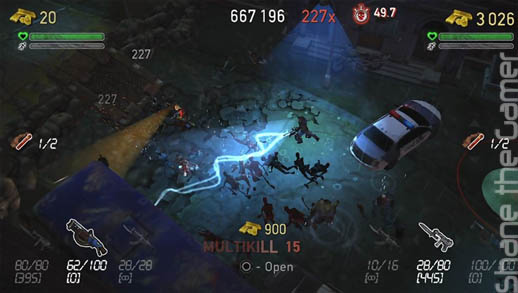 While not including the DLC expansion, Dead Nation on Vita still packs a lot of content into a portable game. With multiple difficulties to play through, collectables to find, and weapons to upgrade, this isn’t a game you’ll finish quickly. The difficulty curve ensures you’re always thinking on your toes, while maintaining that the Levels can still be beaten. Except for Morbid… only the master of zombie hunters will see the game finished on Morbid. 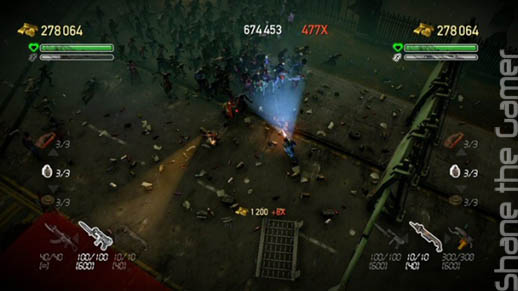 Dead Nation is a game that has been around for a while but, like the Vita, has never really been given its dues. For those complaining that the handheld is lacking games, Dead Nation is a fantastic console-quality game that demonstrates the power of the Vita.

For those who already own it on PS3, Sony are offering a cross-buy promotion in which the game is free for you on the VIta.

This doesn’t justify going out to buy the console if you don’t already own one, but the inclusion of a game like Dead Nation in the Vita’s digital library is just more proof that this console has plenty of life left in it.