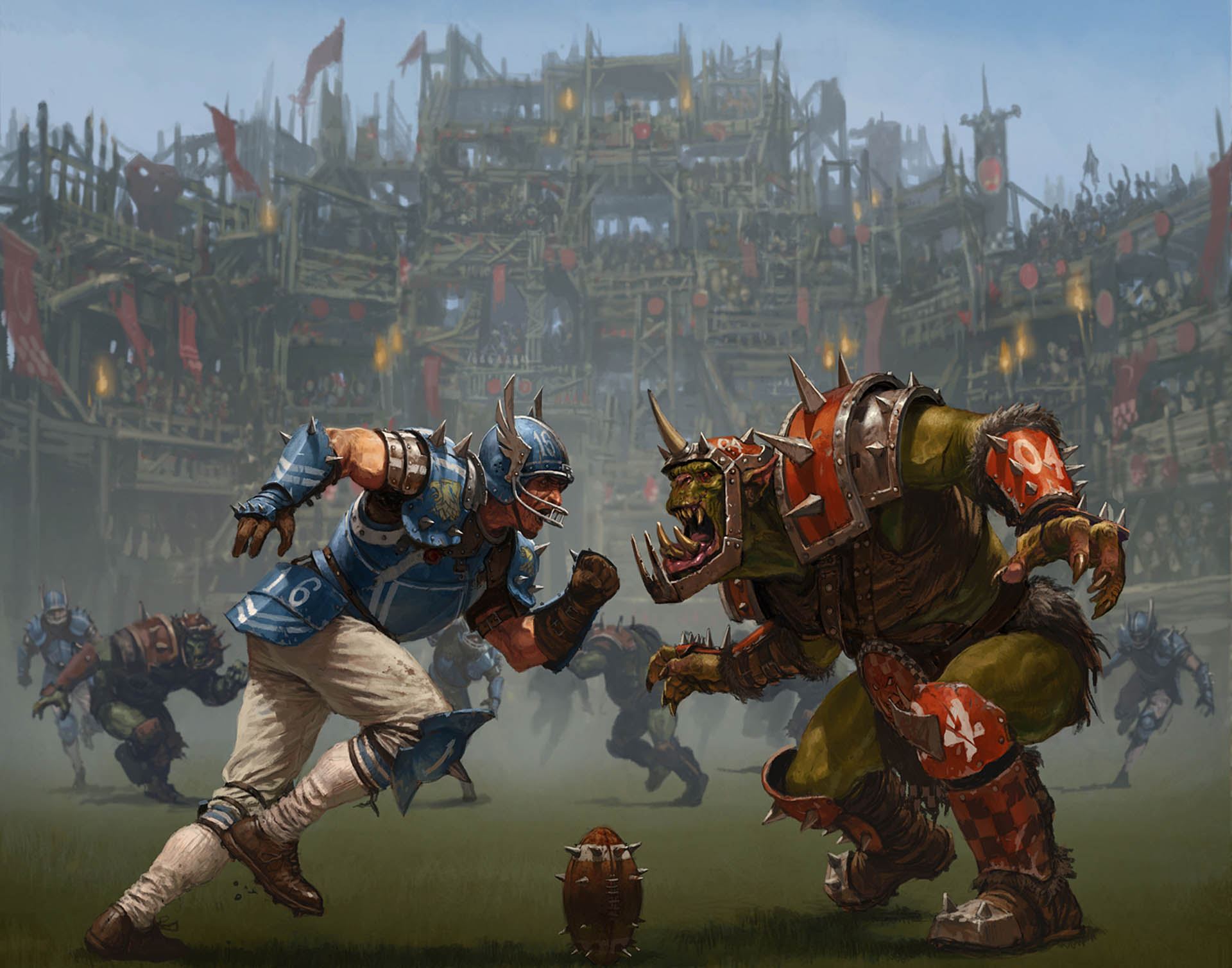 What do you get when all those geeks with their hand painted figurines playing Warhammer and the like desperately want a Madden game catered to them?

Well you get Blood Bowl. This board game has been around a while with the first board game edition being released back in 1986. It has evolved and been simplified over the years and also become more sports orientated. With the new board game adaptations there have been a few videogame adaptations as well with the most recent being Blood Bowl II on Xbox One, PS4 and PC. 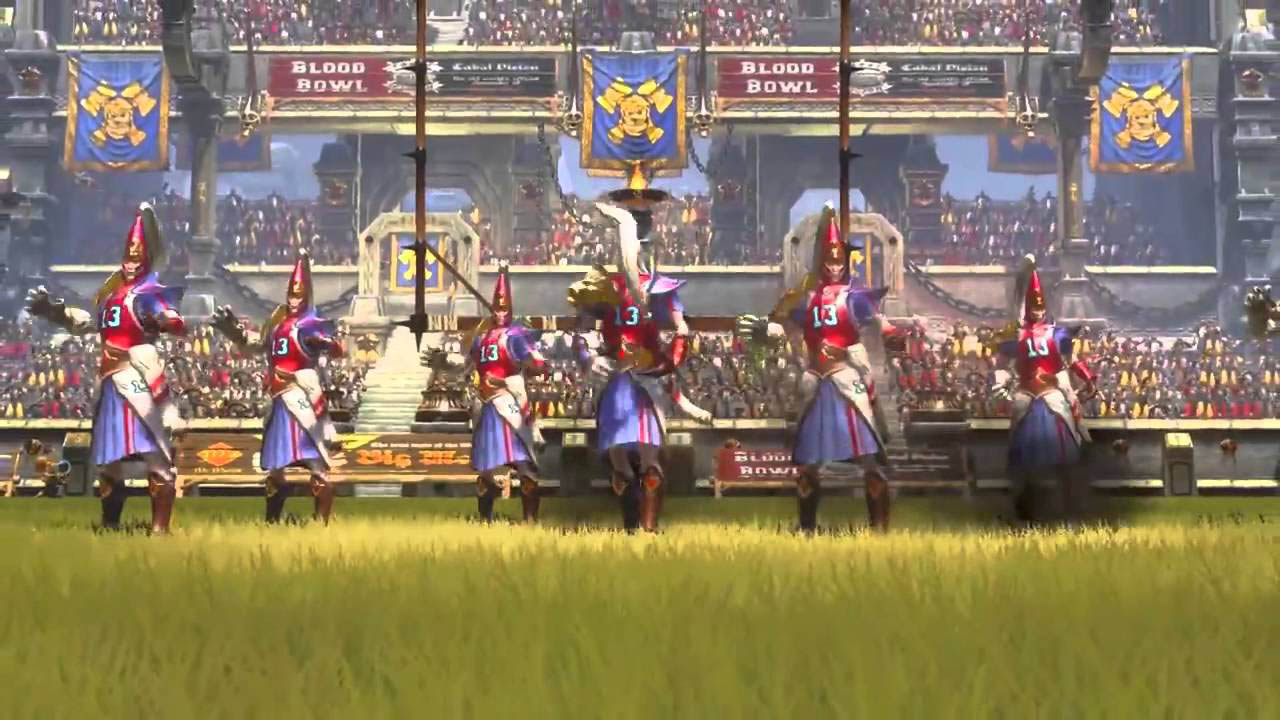 It is, while superficially based on Grid Iron, a turned based strategy game.

The aim is to get the ball across the line at the other end of the field but the rules and general gameplay are a bit more brutal and strategic. Blood Bowl II is heavily based on fantasy. It incorporates both a fantasy based world in which the games are played and provides a good selection fantasy races to choose as your team. From troll and vampire commentators to quite literally killer fans (although that part might not be so much fantasy) it is definitely more orientated to a table top crowd.

You have a team of 11 players and hopefully you have wisely chosen a good combination of position types, which can vary slightly depending on the race of team you have chosen.

A game consists of 16 turns in total and two halves. Each player on the field can have an action but certain actions can only be executed once per turn, such as passing the ball or using a Blitz tackle. 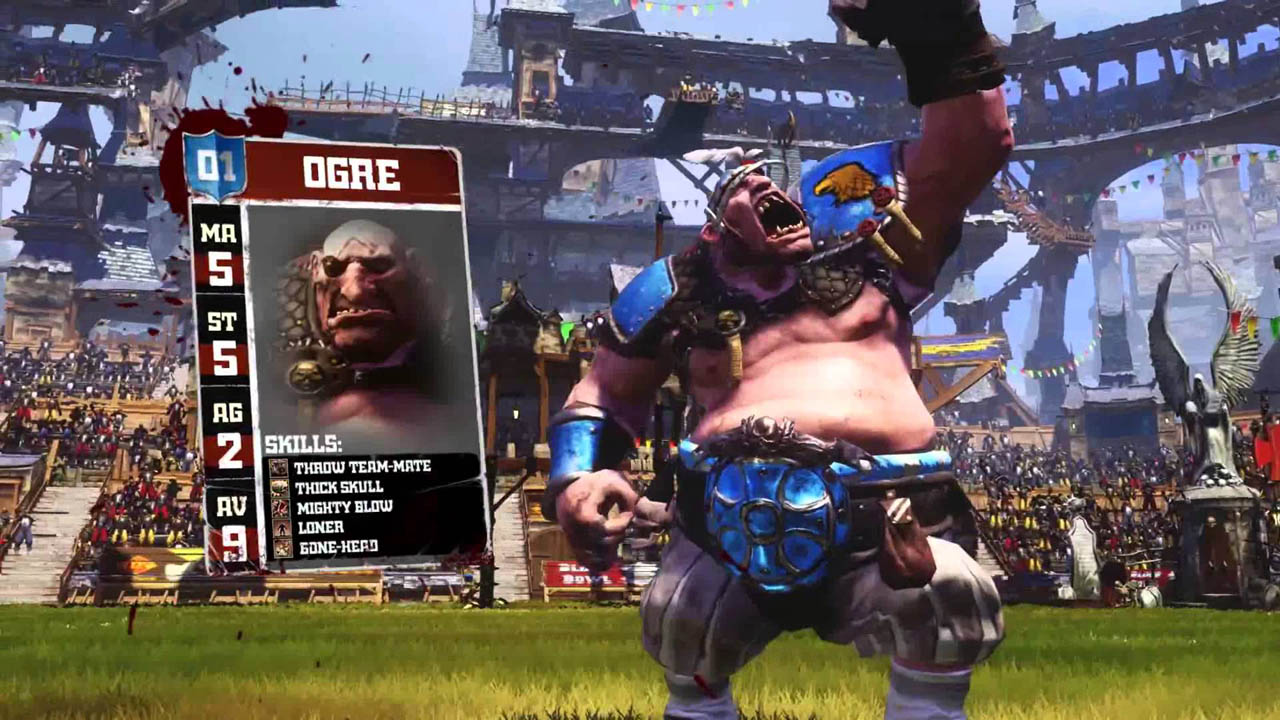 Using these mechanics you need to beat up the other team and strategically set up your team to be able to make the final run across the back line with the ball.

The field is made of squares, and depending on the player they can move a certain amount. There are other variables to take into account when navigating the field for instance passing by an enemy player gives them opportunity to trip you but being alongside your own team mates can assist them in a tackle.

As with any ‘sports’ game there are several modes available. The Campaign mode gives you a disgraced human team and it is your job to coach them to victory. The Campaign mode serves another job as it slowly introduces all the mechanics. Though this is not done all in one match, so you actually need to play through multiple matches with campaign to get the full tutorial, is it were. 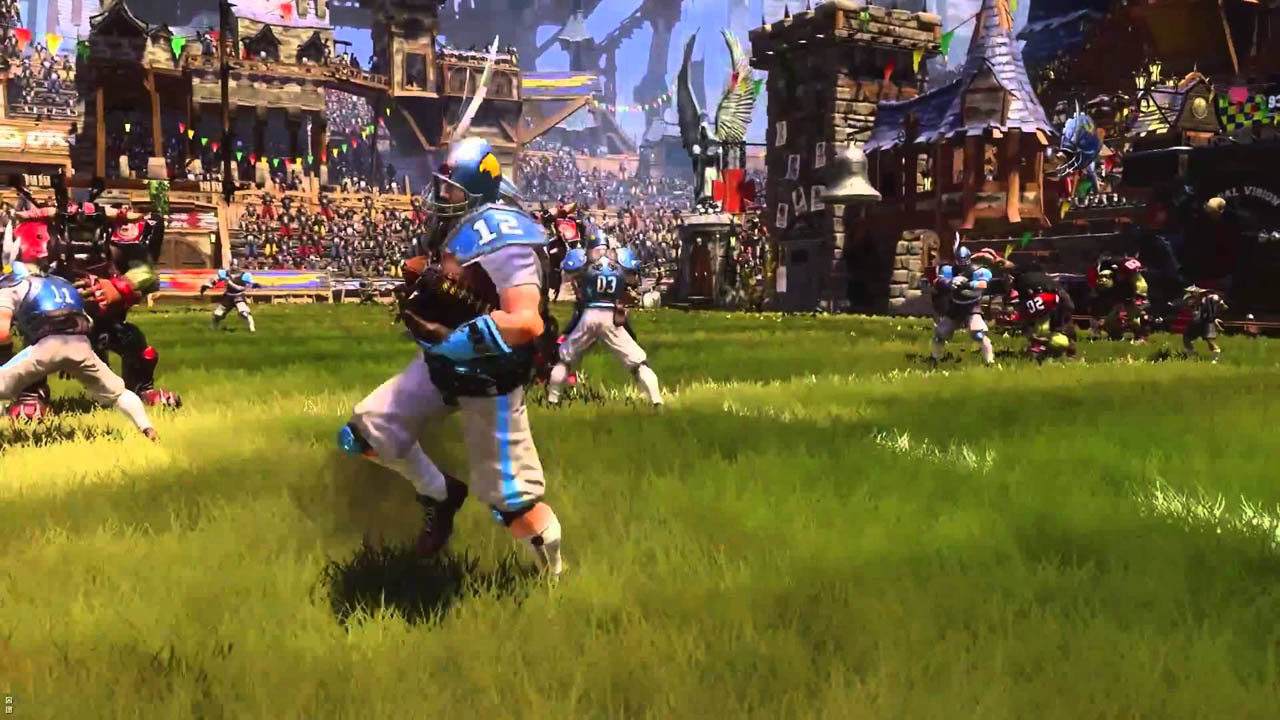 The Campaign was not as fun as the Play a League mode.

Playing a League has you create your own team, of which you can choose from a good selection of races, which I very much enjoyed. Choosing a team of Dark elves with a position title of assassin had the game growing on me just a little.

Jumping into a League, without being familiarized with all the mechanics, is ill advised as it gets quite complex. Trying to follow what is happening in any capacity without fully understanding is sure to see you annihilated on the field. Friendly matches can offer some practice but once again it does not tutorialise anything and so can be just as brutally un-educational. 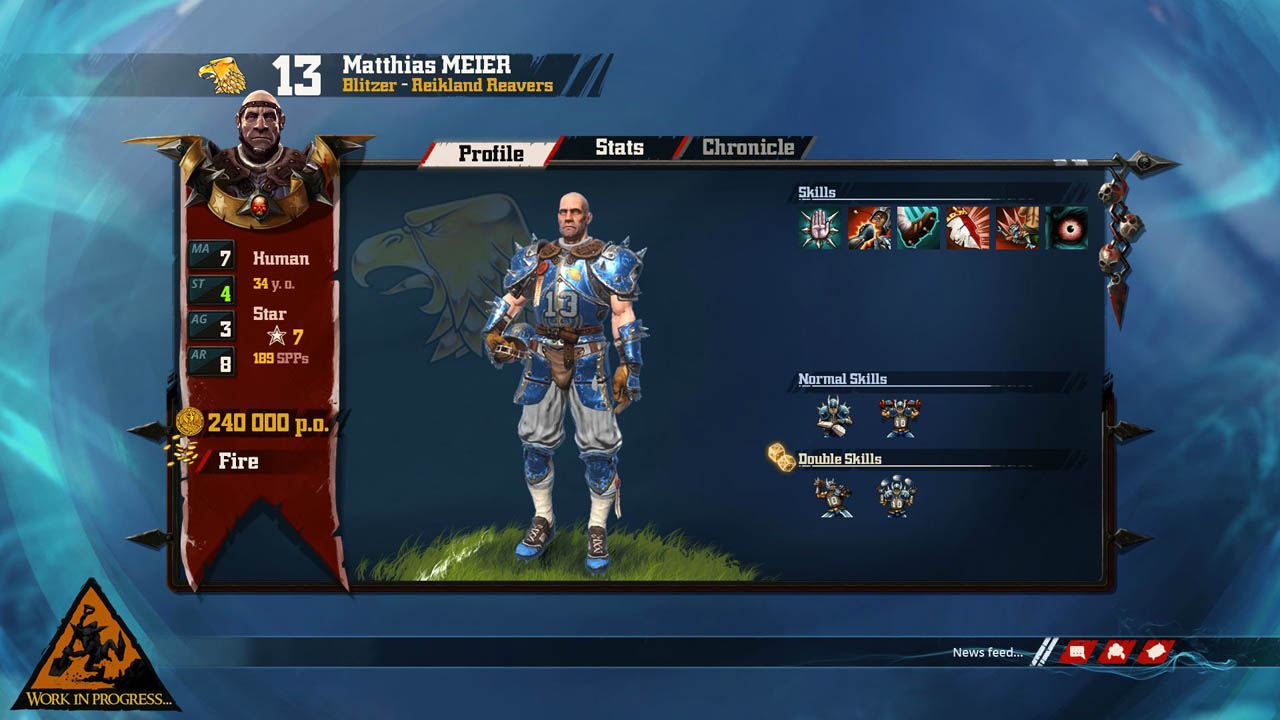 I’m not a big fan of NFL, but I have to say I didn’t mind this fantasy themed turn based strategy version. That isn’t to say it couldn’t have been better. I really feel that after playing one match there was no way I could go through another straight after. It was just way too long.

You can have a general strategy but you still need to wait and see what the other team is doing to make a good counter moves so each turn takes a bit longer. After 16 turns I really didn’t want do it all over again. 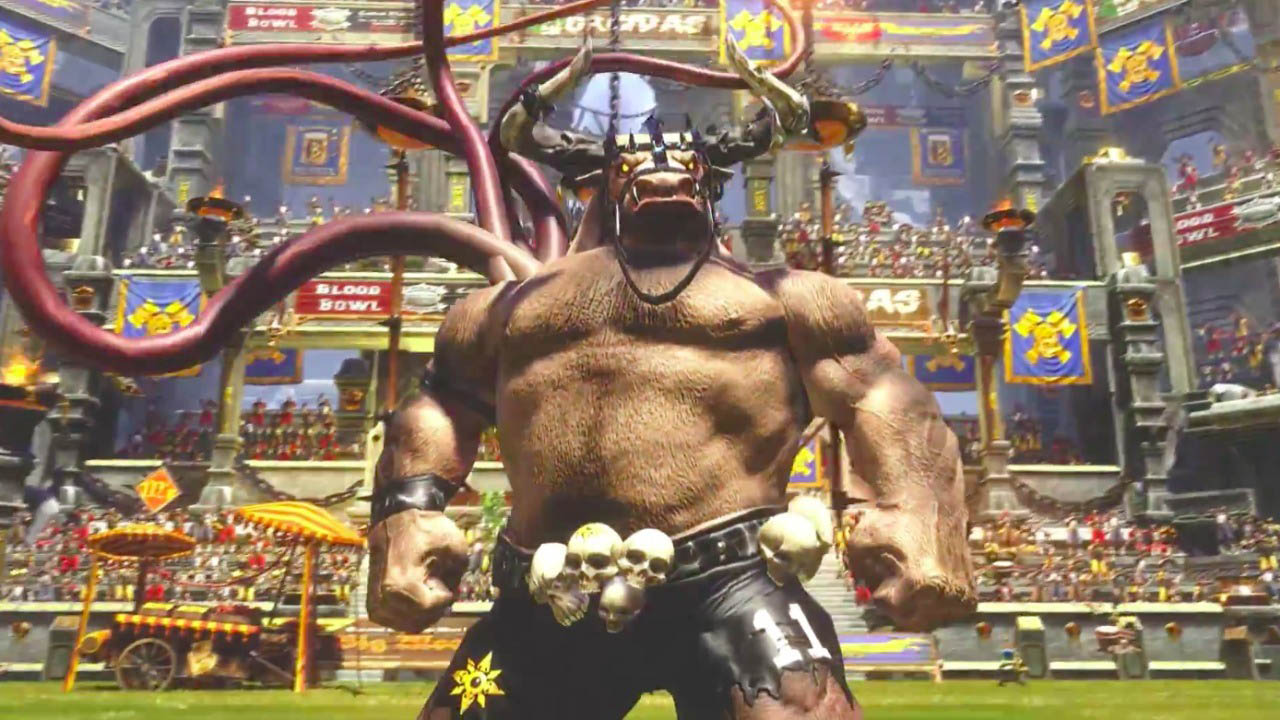 Since you are playing with a view of the whole field it doesn’t dramatically affect the gameplay too much. The commentators can be a bit annoying. I’m not sure if they are supposed to be amusing or not. They do try to make some pop culture references here and there but to no comic relief. They also don’t really make many accurate comments on what is actually happening in the game.

I have to say I thought it was all going to be much worse but the combination of NFL and a fantasy turn based strategy wasn’t all that bad. Graphics weren’t top notch and music was average.

The gameplay can be engaging when using your own created team. However you do need to warm up to the possibly over complicated mechanics of it all.  I don’t know how close to the board game this version is but I’m sure it saves a lot of set up time and you will always have someone to play with, even if it’s only the AI.