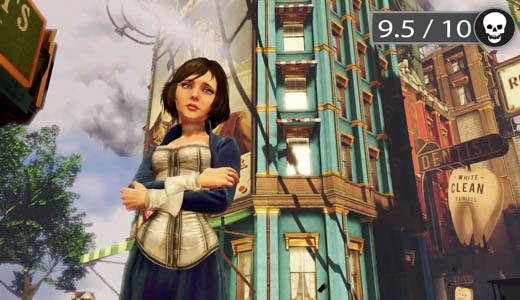 Bioshock Infinite, the third game in the award-winning series, swaps the underwater dystopia of Rapture for the seemingly utopian Columbia, a floating city in the clouds.

Irrational Games, gives us a glimpse of a past that never was, or one that might yet be. Welcome to the fascinating and somewhat bizarre world of Bioshock Infinite.

The game starts of the coast of Maine in 1912. Booker DeWitt, ex-Pinkerton detective, is being rowed towards a lighthouse by a very peculiar, bickering, English couple. The scene is very reminiscent of beginning of Bioshock, where the protagonist happens upon a tower in the middle of the ocean before his decent to the city under the sea. 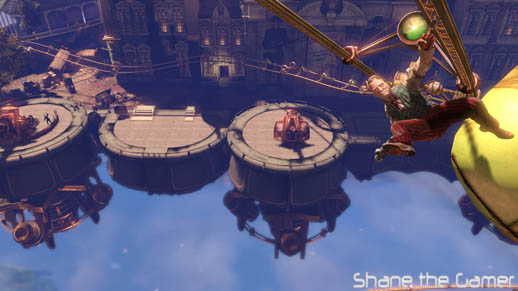 The Englishman hands Booker a box; in it is a pistol, photo of a girl with the name Elizabeth scratched on it and a note of the back that says “Bring to New York unharmed”, a postcard of statue and a key.

After climbing to the top of the lighthouse, Booker finds himself encased in a capsule, again very similar to Bioshock; only this time, instead of plummeting to the depths of the ocean, Booker DeWitt is rocketed into the heavens. Breaking through the clouds we see a tantalizing glimpse, though a small window, of the amazing floating city of Columbia, before coming to rest in a candle-lit temple-like building. 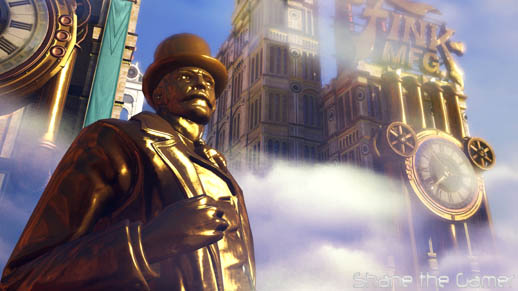 Booker’s motive for visiting this city in the clouds is revealed via a flashback, with a booming voice telling him to “Bring us the girl and wipe away the debt”; the girl being the doe-eyed Elizabeth, imprisoned within the angelic-looking Statue of Columbia that towers over the city.

The moment when Booker first opens the door onto the streets of Columbia is bound to become a classic video-gaming moment.

It is possibly the most impressive-looking game environment I’ve ever seen. 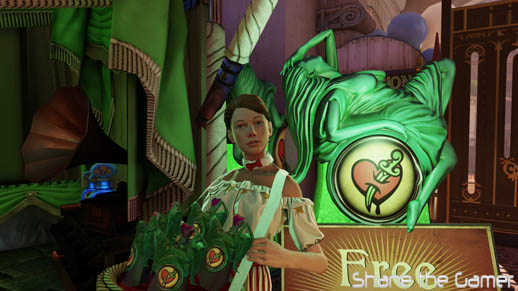 With masses of detail in both the architecture and the citizens of the city, it feels real and alive. Adults converse, whilst children play. Huge zeppelins soar past as floating buildings moor themselves in a surreal fashion against the parades.

Columbia was founded by the self-styled prophet Zackary Comstock as a representation of American Exceptionalism; the belief that America has a unique and special purpose to promote liberty and democracy across the world.

Whilst originally intended to be part of the 1893 World’s Fair, Comstock instead used Columbia as a weapons platform against the Chinese during the anti-foreigner and anti-Christian Boxer Rebellion at the turn of the 19th Century. Appalled at Columbia’s unsanctioned actions, the United States ordered the city home. Comstock refused, declaring Columbia an independent entity. 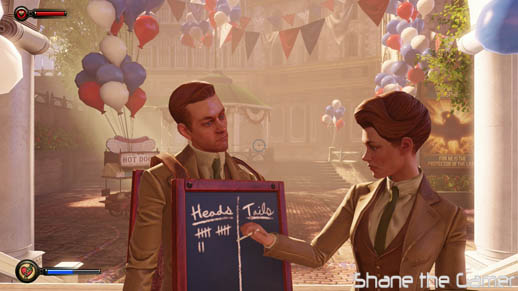 As you’d expect all is not as it seems, with the perfect-looking society masking a city built on religious fanaticism, bigotry and racism. After about an hour of gameplay, Columbia exposes its dark underbelly.

The mysterious “AD” that Booker has branded on the back of his hand matches posters around the city that single him out as “the false shepherd” making him an enemy of Columbia. It is not long before he is discovered; resulting in a battle with the city constabulary ensues.

At this point Booker ceases to be a tourist. What follows is a tale where Booker must rescue the girl, Elizabeth, get involved in a rebellion and confront his demons. 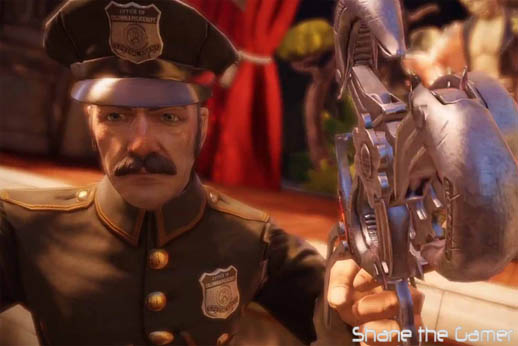 Apart from sharing a few similar themes and gaming conceits, Bioshock Infinite has nothing to do with the previous two Bioshock games. It is like a fresh start. New players can jump on board and enjoy the game just as much as seasoned fans. That’s not to say that there aren’t any winks for those familiar with the other games.

Fans of the previous games will be familiar with some of Bioshock Infinite’s gameplay elements. At its heart the game is a first-person shooter, but with a smattering of role-playing game element.  As well as the usual arsenal of weapons, which are found littering the game environment and on the bodies of the fallen, players can also take advantage of Vigors. 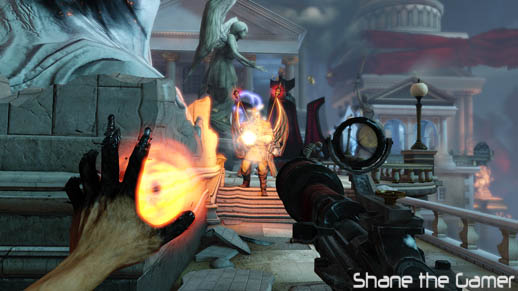 These potions, which work very similar to plasmids in the other Bioshock games, give Booker special offensive powers. With names like Bucking Bronco and Possession, they were originally intended for much more benevolent tasks; check out the demonstrations and posters at the Columbia Raffle and Fair exhibits.

Vigors are fuelled by salt, which can be found in bottles and items scavenged from bodies and containers.

It is also possible to upgrade Vigors using one of the many vending machines. Vending machines can also be used to upgrade weapon abilities, as well as to buy ammo and health. It is also possible to equip Booker with gear, in the form of trousers, shirts and hats; all of which act as buffs enhancing skills and improving abilities. These special abilities offer players the opportunity to customize Booker according to their play style. 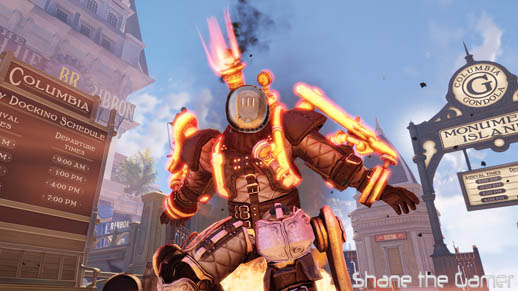 Columbia has a rather unique freight system that Booker can also use as a mode of transport. The Skyline system works like a series of Rollercoaster tracks across the city. Using a device called a Skyhook, both Booker and Elizabeth can propel themselves along the tracks to get to out of reach places. It is also possible to change direction and leap from track to track by a sort of free-fall. It’s exhilarating stuff and makes for some interesting and kinetic combat situations.

Whilst I can’t abide tortuously difficult gaming affairs, Bioshock Infinite’s way of handling player death, does make things a bit easy. On dying Booker is resurrected losing some cash in the process, but that’s about it. 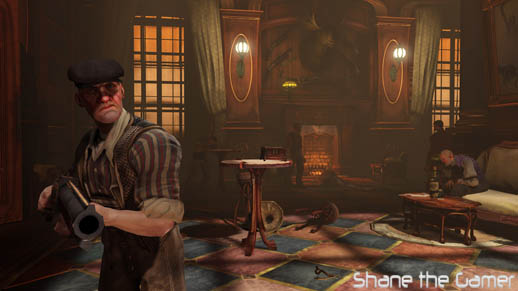 It’s not a level restart or anything, opponents get a little health boost, but the dead ones stay dead. The player’s persistence pretty much guarantees success. So instead of adapting, it is easier to go in hammer and tongs until you keel over and die…again. Rinse and repeat. Bioshock Infinite isn’t alone in this regard though, it seems that medium difficulty is becoming the new easy.

All is not lost, though. Whilst I’d recommend that seasoned first-person shooter fans play Bioshock Infinite on the hard setting, after a play-though the more unforgiving 1999 mode unlocks. 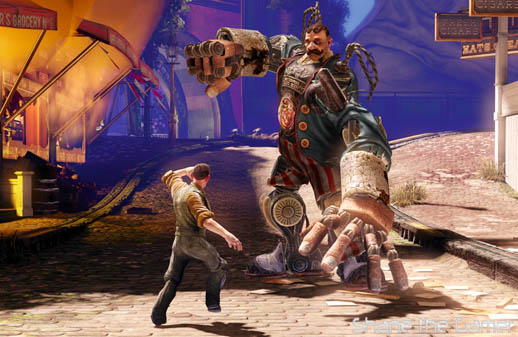 Whilst not the nosebleed-inducing hardcore mode that I thought it would be, the 1999 mode does up the ante rather considerably.

All those upgrades, buffs and special abilities suddenly become a lot more relevant; some of them that felt a bit pointless in the first play-through finally become useful in the 1999 mode.

Whilst the city of Columbia is without a doubt the stand out star of the show, a special mention must go out to the character of Elizabeth, the girl in the tower.

The developers have spared no expense in bringing to life Booker DeWitt’s constant companion. Everything about the Elizabeth is a delight to watch, her subtle expressions, her initial nativity (I stood there for a minute or so just watching her dance with joy on the Battleship Bay boardwalk) and the development of her character right to the game’s conclusion. 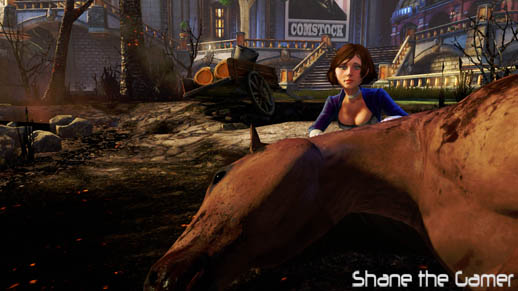 Fully realized character arcs are something usually missing from video games. Video game protagonists, especially in first person shooters where they usually start out shooting and end up shooting, are rarely properly fleshed out. But Elizabeth’s character fulfills the role of the game’s conscience perfectly as events take a toll on her.

Elizabeth accompanies Booker pretty much for the entire game. And she’s not just a pretty face, either.

Elizabeth has the ability to drag items and weapons through dimensional tears, at your command, which can radically alter the course of conflicts. This, and her timely resupply of ammo and health in the midst of battle, creates an interesting bond between the two characters. 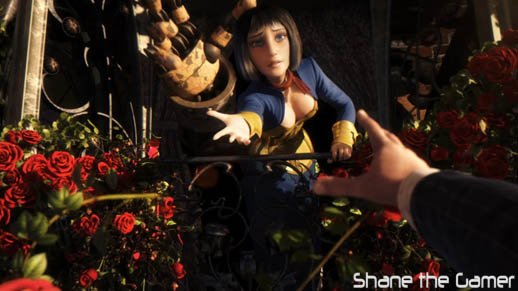 In-game soundtracks are, for the most part wasted on me.

Bioshock Infinite does, however, manage to use music to excellent effect to the point that it is worth a mention. From the haunting version of the Christian hymn “Will the Circle be Unbroken” as the sky-city of Columbia first comes into view to the subtle inclusion of a few mysteriously contemporary tunes to throw us off guard, for instance the pipe organ rendition of Cyndi Lauper’s “Girls Just Wanna Have Fun” and The Beach Boy’s “God Only Knows”, as reimagined by a barbershop quartet.

The game managed to keep me emotionally engaged throughout, concluding with enough false endings to make Peter Jackson blush; the last twenty minutes does have a little too much exposition with minimal interaction, but still it is expertly crafted. The ending is superb and promises some very juicy discussion over the intertubes in the coming months. One bit of advice: wait for the final scene after the credits! 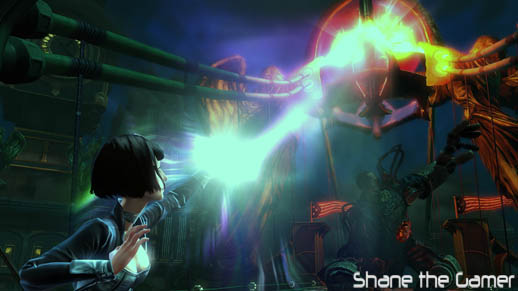 Bioshock Infinite is an intelligent and riveting tale of a girl imprisoned in a tower, inter-dimensional physics and a city in the clouds.

The game’s play on the more sinister side of religious zeal is an interesting and rather bold move on the part of the developers; it is good to see video games maturing enough to take on heady subjects such as this.

The game looks absolutely amazing; I’d go as far as to say that it is one of the most gorgeous-looking games I’ve ever played.