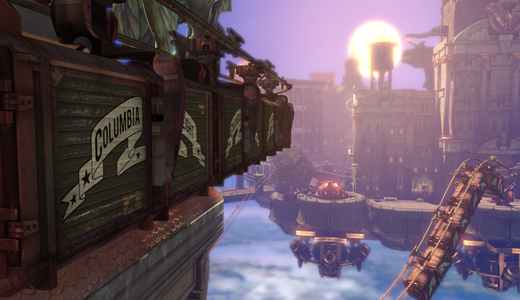 Very recently Shane the Gamer was invited by 2K Games for an epic and memorable 4 hour hands on of the February releasing juggernaut title Bioshock Infinite. The third and from what we have seen the best in the series.

The Demo on offer started out with you making your way up to Columbia, the city in the sky, from the fogged, murky and seemingly polluted (and supposedly corrupted) America’s below.

You must rescue a girl called Elizabeth. She is your Mission, your focus and also will become, an ally.

In true signature Bioshock FPS style, a new world opens up before you as you climb what could be considered a ‘stairway to heaven’. 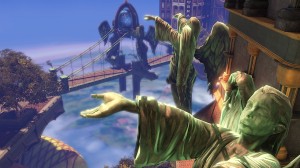 is a place where the disillusioned and desperate civilians of the land below seek to be in.

All inhabitants of Columbia worship ‘The Prophet’. A kindly looking white bearded fellow who holds absolute power over the sky-high city. One man’s view of Utopia, a literal Heaven.

Even appropriately named after it’s leader, Columbia does have a few surprises and it’s not all that it seems, as Ravens flock in the skies. Minions that keep an eye on everything. The Prophet sees all.

They live by his decisions, his views, beliefs and strict rules. No one dares to step out of line.

From the Preview we experienced a sophisticated degree of decision making within gameplay, which will not only alter your course but also the attitudes and reactions of in-game characters. 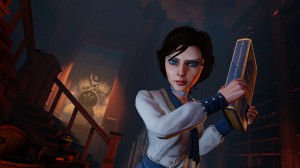 The object of this hourly play-a-thon was to find a young girl called Elizabeth.

You will trek about certain areas in this semi linear, but definitely open world environment. Basically the edges of the airborne metropolis are the only restrictions. That said, you can fall off accidentally.

For a time you get to familiarize yourself with the area, until you are presented with a racially tensioned choice.

Whether you opt to be a ‘sheep’ and do what is expected of a diligent Columbian or follow your own morals is of little consequence. It’s here you are labelled as the ‘False Prophet’.

Now things get really dire for you.

Guards and even civilians are against or fearful of you. And they have every right to be so.

The preview gave a taste of both powers and weapons that you can expect to wield throughout play.

From pistols to machine guns through to the ‘Virgil’, which quite clearly is a psychically infused power with varying capabilities.

The ‘Virgil’ not only allows you to take out enemies, with the conjuring or dark forces, Ravens and more, but even cooler, you can use it to possess both man and machine.

If you have the juice (or special Elixirs), possess a guard or a weaponized civilian and try and take out as many of their fellow comrades as you can. 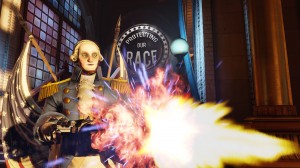 machine can have different consequences, dependent on the type of device it is and your reason for taking control of it (from a safe distance of course). Vending machines give you goodies, and statically mounted guns (kinda like turrets, but not really…) give you the upper hand.

You do need to get fairly close to any of the mechanized possess-ables before you can ‘become’ it, but your usually still in a safe-ish zone.

Your ‘Vergil’ will deplete over time, so you need Salt, and alot of it to keep it topped up.

The Skyhook (when obtained) is both a utility and a weapon. With copious amounts of gore (which can be turned down or off under the Settings Menu) you will slice away at your given foe.

Then use it on the zipline railing systems which is the quickest and sometimes only way to get around. Especially in areas where there are vast gaps of open sky from one area to another. An example is going from a balcony or ledge over to a flying ship as it slowly saunters past. 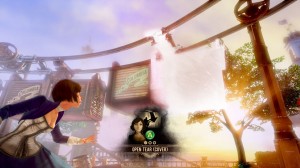 Exploring is key and there are so many events and occurrences going on throughout the sprawl that if you miss a turn or an entire area, you’ll completely miss them, for good. They will occur in real (game) time and usually do not reoccur. Theatrics to the likes of the Dimwit and Duke Puppet Show, a flying Zepplin with a Barber Shop Quartet (called the B-Sharps), brawls, arguments and more as the city takes a life of it’s own. Forget the usual ‘walking zombie’ like AI for in-game characters that we have seen in other open world titles. Columbia, REALLY has a life of it’s own and you are almost secondary to it. Like a stone being thrown into a still un-rippled pond.

Items are riddled throughout the games’ environments, and these are dynamic. If you found a really good pickup beit a crate, storage box, chest or singular item within a certain area and make a note to remember where that was. Don’t. It’s not going to be there the next time you play, even if you start a New Game. It’s moved and you’ll need to re-explore.

You will also loot the bodies of those that fall in combat. It was unclear in this Demo as to how many items you can carry and/or the limitation.

Clearly the Demo showcased bits of everything that it could muster. Battle Bay was a man made beach resort where the inhabitants are so chilled out, it was a combat free zone. 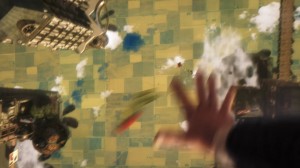 there tends be an ode to alot of 80’s pop music (well, there was in this preview), which I suspect is an almost Easter Egg from Developers who no doubt are children from the 1980’s.

The storyline for the Demo that we played was cryptic. you were tasked with liberating Elizabeth, who you discover on Monument Island fairly early into it.

she accompanies you for the rest of the game, but not as an average run of the mill NPC, more like a partner.

She will open doors, solve puzzling switches and dishes out a bit of pain to those that try to obstruct you.

We encountered them a few times, and definitely, they serve a purpose in the main guts of the game, but what that purpose is, we didn’t know, and for all of our questioning, 2K were not giving anything away. 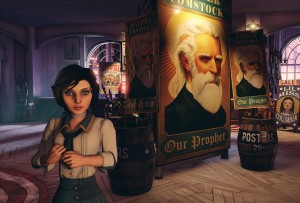 As the four hours of solid full on Bioshocking came to a completion, the Demo left on a cliff hanger (I suspected that it would).

Easily we could have gone through another play of it had we had the time. There was alot of exploring left to do, so much more to see and like being on holiday in a foreign country, we wanted to take it all in and experience all that we could.

Like you, we at Shane the Gamer will have to wait for the game.

Attending preview sessions as we have done before usually only gives us the bare bones of a game. a slight taste but with no swallow.

Bioshock Infinite was a complete and utter swallow, digest and we came out the other end feeling both satisfied and wanting more.

Bioshock Infinite – we love it.