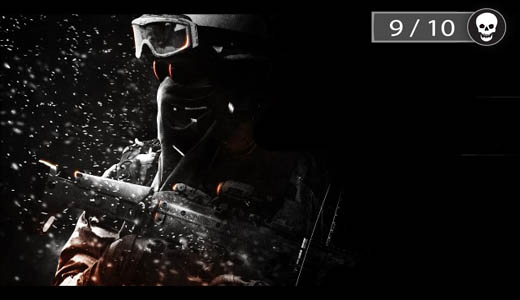 Without so much as a pause between the last DLC drop for 2011’s Battlefield 3, it’s time for Shane the Gamer’s Australian editor, Darren Price, to get frosty and re-join the fight with EA Games’ Battlefield 4.

Battlefield 4 follows relatively hot on the heels of its predecessor, which was released just two years ago. Compare that to the six years fans waited between Battlefield 2 and Battlefield 3, and you’ve got to wonder if EA Games are heading down the same road as Activision with their yearly addition to the Call of Duty franchise.

When I sat down with the game’s creative director, Lars Gusavsson, last month I asked him why only two years between Battlefield 3 and 4, especially considering BF3’s excellent online multiplayer is still enjoyed by thousands of people every day. Gusavsson’s replay was simple. After pointing out the studio’s distraction with Bad Company in the six years between BF2 and BF3, he explained that they had a lot community feedback from BF3 and the technology – meaning the upcoming next-gen consoles – has enabled them to deliver something new. 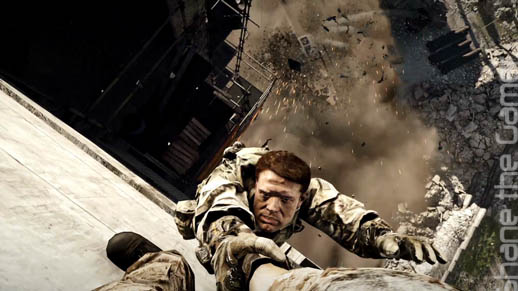 Until the end of the month, the only way anyone can have any sort of next-gen Battlefield 4 experience is on PC. So, for this review I’ve been playing the game on an i7-3820 PC with 32GB RAM and a 4GB GTX680 video card running Windows 7.

Whilst no longer top of the range, the NVIDIA GTX680 is still man enough have the visuals cranked up to the max, running the game at 1080p. I’d be bold enough to say that the PC is probably the definitive way to experience the game.

As with BF3, the PC version of Battlefield 4 uses DICE’s browser-based Battlelog interface to access the game. Whether you want to play the campaign or find a multiplayer server, you are going to be using Battlelog. 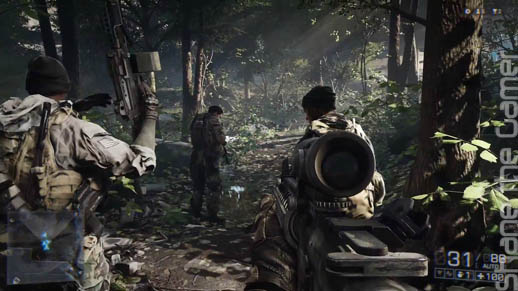 I love the stats and information that Battleog provides players, it’s all there: your last game results, levels and unlocks. Even so, I feel that using a browser window as the game’s front end is kind of cheap-looking. I’d prefer it was integrated in the game.

Battlelog has been expanded this year to include the Battlescreen. This means that if you have a tablet, Android or Apple, you can download an app that lets you view the live Battlemap on a separate screen. You can also adjust loadouts for the next spawn. You can also do the same thing via a laptop or an additional screen via the web-based Battlelog.

Traditionally the Battlefield games, up until BF3 (ignoring the Bad Company spin-offs), were multiplayer only affairs, the single-player experience being provided via AI bot matches using the online maps. The single player campaign in BF3 was critically panned, and whilst I enjoyed it, it brought nothing new to the table and certainly wasn’t really faithful to the unique Battlefield experience. 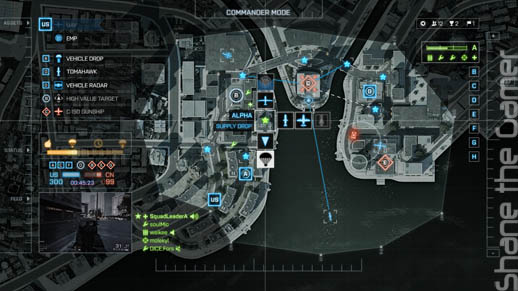 For Battlefield 4, DICE have tried to incorporate some of the core online multiplayer elements into the single-player game. This time we have a squad that you sort-off command (i.e. you can select their targets). Also, some of the environments are more open, with vehicles; reminiscent of the multiplayer maps.

As with BF3’s single-player campaign, the game environments are very dynamic. Of particular note are the weather effects, which are outstanding; Trees buckle, rain falls in sheets and debris get flung around.

Whilst not particularly strong, the single-player story does its job in centering on a conflict between the US and a rogue Chinese government. It is an above average attempt, but still fails to live up to the expectations set by the franchise’s superb multiplayer legacy. 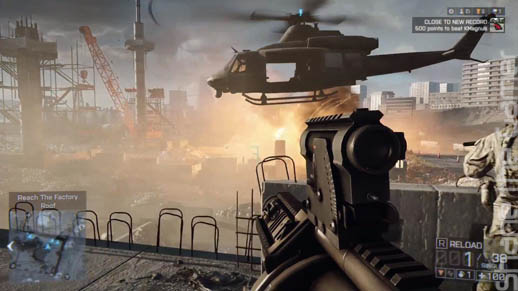 And multiplayer is what Battlefield 4 is all about. Out of the box there are ten different maps that can be played across eight different game types. These range from your classic Deathmatch to fan favourites like the base-capturing Domination as well as the bomb-placing newcomer, Obliteration.

The maps offer up a varied mix of combat environments, typical of what we’ve come to expect from DICE, but with a twist. The developers have managed, wherever they can, to integrate their concept of “Levolution” into the maps. These are dynamic events that take place during battles, changing the way the battlefield plays. The days of static, lifeless combat environments are over.

If you played the Battlefield 4 BETA, you may have already experienced what it feels like to jump off a skyscraper as it falls down into a pile of rubble. We’ve seen dynamic maps before in the likes of Gears of War 3 and its dust storm. But in Battlefield 4 the changes are not superficial, they are much more extreme; areas flood, buildings fall and the weather rips into the environment. 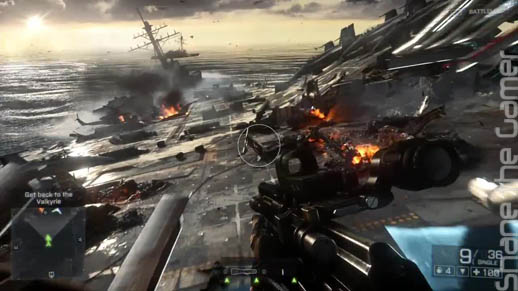 The Paracel Storm map became an instant favourite for me – no doubt due to its similarity to the classic Battlefield map, Wake Island. The idyllic map starts out beautifully sunny with the weather changing into a fearsome tropical typhoon complete with angry sea and winds that can tear down buildings.

Flood Zone starts off as urban combat with armoured support, but once the levy is breached things get wet as the map floods with water, changing routes, vehicle and tactics. Siege of Shanghai, which many would have played in the BETA, is a CBD-based map with a central tower that comes crashing down. Get out of the way is my only advice to you there.

The labyrinthine mountain facility of Operation Locker, gives  the enemy plenty of opportunity to flank you, the locking doors creating lethal dead ends for the unsuspecting. The rest of the maps, the Arecibo radio telescope-inspired Rogue Transmission, the bursting Lancang Dam, Zavod 311, Golmund Railway and Hainan Resort, all provide an elective mix of tactical scenarios, none of which disappoint. But as with BF3, I expect the best is yet to come as premium DLC drops. 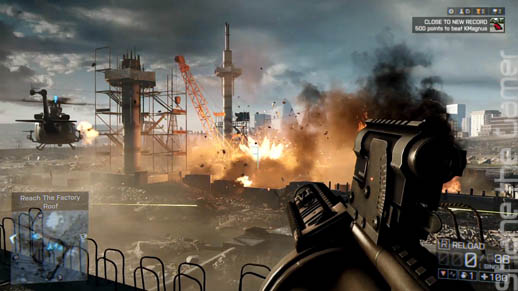 Returning fans will be familiar with Battlefield 4’s four character classes, Assault, Engineer, Support and Recon. As before they are perfectly balanced and provide something for everyone. Each class is fully customisable with players able to choose weapons, attachments and abilities to suit their play style. More equipment unlocks as you level up your soldier.

The game’s progression system rewards players with unlocks based upon what class, weapons and vehicles they use. The more tank kills you get, for instance, the more experience awarded for that vehicle, and the more unlocks you get.

There are over forty vehicles in the game, from quad bikes to jet fighters; their availability dependent on what map/server settings you choose to play with. BF3 was notoriously hard on newbies wanting to become tank commanders or ace pilots, with essential countermeasures and weaponry locked for beginners. This time DICE have been a little more forgiving towards newbies who now have access to countermeasures and decent munitions from the start. 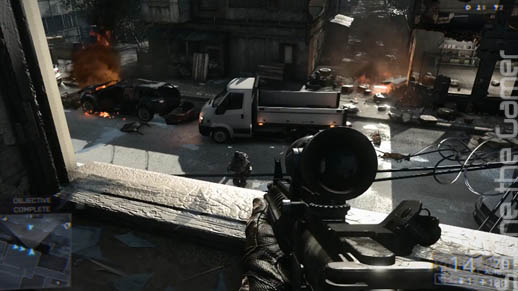 DICE seems to have realised just how overwhelming online multiplayer games can be for newcomers. A test range has been provided to help players get to grips with the hardware on offer, without getting pumped full of lead or blown to pieces. Simply put the test range is an empty island loaded with all the toys and a few targets thrown in for good measure. It’s a great way to learn how to fly a helicopter and avoid the sort of kamikaze flying that ends with you killing your entire squad and become a pariah on the battlefield.

EA have been rattling on about stuff being “only in Battlefield”, with a load of maybe-not-actors telling tales of their escapades in Battlefield 4. Whilst it sounds like a load of marketing twaddle, I can see where they are coming from.  Unlike a lot of first-person shooters, Battlefield 4’s large-scale combat environments avoid that spawn/death, rinse/repeat gameplay. Whilst the hardcore twitch gamers are going to have plenty of cannon fodder to keep them amused, the opportunity is also there to set up and execute some strategic gameplay.

For instance, it is possible to sneak about capturing bases using commando tactics without firing a shot. Watching the enemy on the mini-map, darting about in absolute frustration wondering where are you and why he isn’t capturing the base, is so entertaining; right up to the point that he makes a mistake as you put him out of his misery. 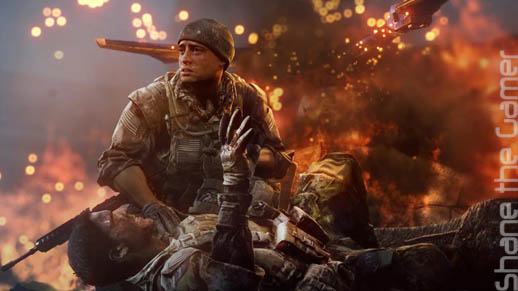 In every game, be it an audacious move that proves successful or fails spectacularly, or even a dastardly one-on-one game of cat and mouse; there was at least one moment that gave me a grin. This is what multiplayer gaming is about and DICE has just about nailed it this time.

But what if you are still having a great time with BF3? Why switch to Battlefield 4. Well, apart from the obvious new content, the visuals have been polished up even more, providing an environment that feels more alive, with debris, vegetation and water thrown everywhere. Also, this outing sees the return of Commander mode from BF2. Unlike before, Commander is 100% tactical, so you won’t find yourself a sitting duck huddled over a laptop hoping you aren’t spotted. Also, you can play as the Commander via the Battlelog app, giving you a bit of Battlefield on the go.

As great as it all is, Battlefield 4 is experiencing some teething problems, the likes of which PC gamers are all too familiar with. Whilst my rig will run a BF3 multiplayer game silky smooth, I did on occasion get the odd frame drop in Battlefield 4. 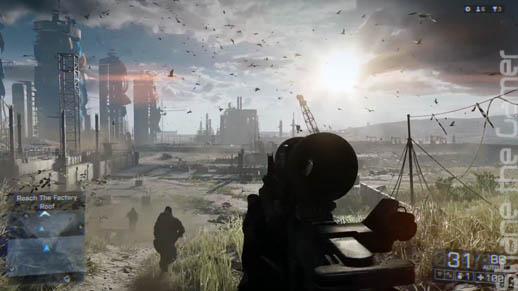 Checking the framerate via FRAPS, I was getting a consistent 60fps, which is to be expected from my monitor with V-Synch enable (I’m not a fan of screen tearing). Some of the servers are suffering from lag, with the tell-tale stuttering and rubber banding ultimately leading to a kick.

Battlefield 4 is a solid game and one that I feel is going to continue to surprise as the barrage of DLC drops over the next year and a half. You really need to consider investing the Premium DLC upgrade to get the most out of the game, but if the DLC offered up is anything like BF3, it will be worth every penny.

The single-player campaign is visually superb on a PC with the settings maxed; and whilst not up to the standard of the multiplayer game, still offers a decent bit of entertainment. It’s with the multiplayer game that Battlefield 4 excels, it comes complete with some top maps and as a large-scale vehicle and infantry-based first-person shooter it is simply without peer. 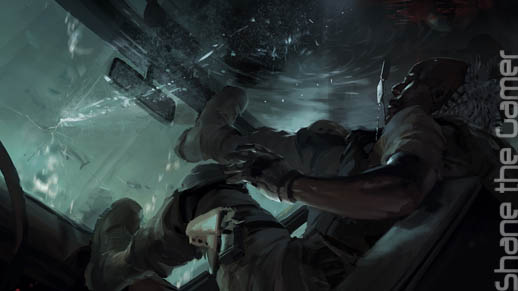 If you are into your shooters, this is one to pick up right now.

See you on the Battlefield.