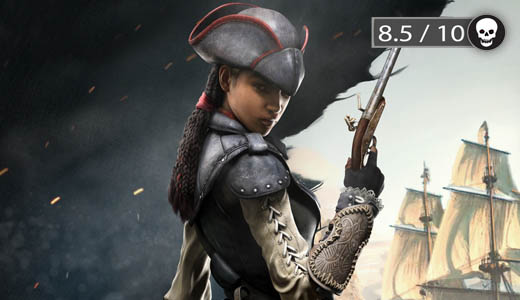 I was first introduced to Liberation’s new protagonist, the female assassin Avaline de Grandpŕe, at an Assassin’s Creed III preview event. It was the same time I first played the PlayStation Vita. Whilst Avaline and the new settings of New Orleans and the alligator infested Bayou interested me, the gameplay didn’t; the Vita’s tiny screen and fiddly controls making the game easy to dismiss.

Ubisoft’s decision to bring a high definition version of the PlayStation Vita game to the great unwashed is a welcome move as for many- including myself – as it is a part of the Assassin’s Creed saga that they would otherwise have missed out on. 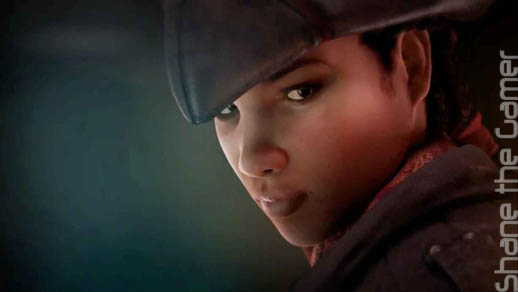 Available as a download-only title on Xbox 360, PS3 and PC, the game weighs in at a rather eye-watering 1.7GB, which is a lot for an Xbox Live Arcade game. The lack of being able buy a physical copy of the game is likely to put off those with only a moderate internet provision.

For the uninitiated, the Assassin’s Creed series is a historic sci-fi romp that capitalises on the concept of genetic memory, in that we harbour the memories of our ancestor’s lives in our genes.

Abstergo Industries, a modern-day front for the ancient Templar Order, has been searching the genetic memories of the descendants of a brotherhood of assassins. Using a device known as the animus the clandestine organisation has been trying to locate artifacts that will help it engineer the future of the human race. 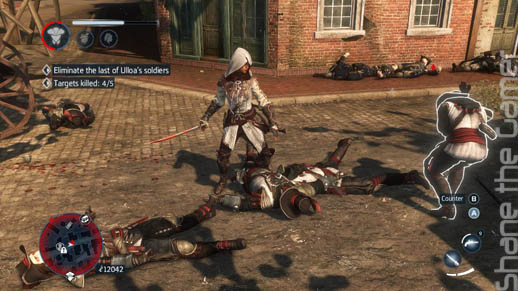 The Templar’s belief in an ordered structure for humanity’s ascension is in direct contrast to that of the Assassins who believes that humanity should be allowed to advance naturally. Hence, the two organisations have been locked in a conflict that has continued through the ages to modern times.

Unlike the previous games, Assassin’s Creed: Liberation HD doesn’t bog itself down with the modern day storyline with players “going back” into the memories of historic characters. This time the game changes things a bit, with a twist that may not be immediately apparent.

Instead of the usual set-up, Liberation is presented as a game-within-a-game created by the fictional Abstergo Entertainment in partnership with Ubisoft. This will make immediate sense to players of Assassin’s Creed IV: Black Flag and ties the game in neatly as off-shoot of the franchise’s main storyline. 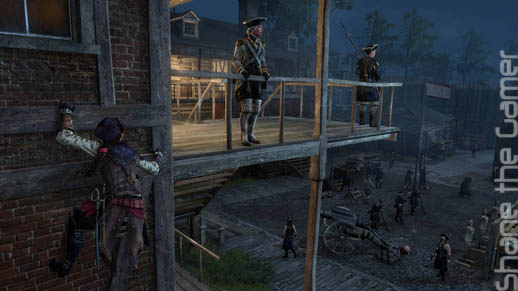 Liberation is primarily set in New Orleans in the late 1700s as control of the city is transferred from the French to Spanish rule.

Players take control of Avaline de Grandpŕe, the offspring of a union between French merchant, Philippe Oliver de Grandpŕe and his former slave Jeanne. Avaline’s mother left when she was a child leaving Philippe and his wife Madaline deI’Isle to bring her up as a lady in New Orleans. Despite her privileged upbringing Avaline was recruited and trained in the way of the assassins by her mentor Agaté.

As the Spanish take over the region, Agaté dispatches Avaline to assassinate the Spanish governor and Templar, Antonio de Ulloa. Defeated, Ulloa reveals to Avaline that slaves are being taken to Templar worksite in Mexico. Avaline spares his life in exchange for an ancient artifact and a map leading her to the location of the slaves. 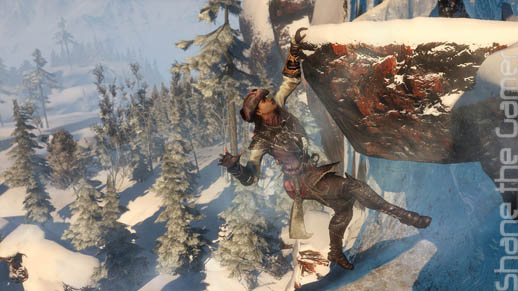 Further disobeying her mentor, who is already angered that Avaline spared Antonio de Ulloa’s life, she leaves for Mexico to unravel the Templars’ plans.

The story plays out pretty straight until you stumble upon the familiar subterranean architecture of the First Civilisation and the series trademark esoteric artefacts. Lurking in the animus is the enigmatic Citizen E, who at certain points in the story, if discovered and killed, will reveal the unedited sequence of events adding more insight into the game’s somewhat convoluted plot.

Despite being a similar tale of political intrigue as the other games, the story and mission structure isn’t quite as deep this time, as would necessitate a title originally designed for a handheld offering gameplay on the go. 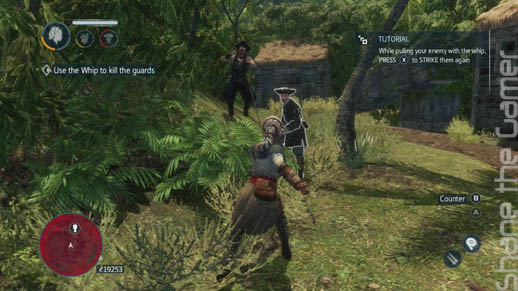 The relatively short missions allow players to easily drop-in and drop-out. Because of this, I didn’t have a problem with them, as I was able to enjoy the game in more manageable bit-sized chunks. But this also meant that I ever got as immersed in the plot as I have in the previous games.

The game’s story did seem to jump about a bit and was sometimes a little difficult to follow- especially after an extended break.  Often I found myself almost mindlessly following screen prompts to go there, kill them pick that up and bring it back.

It’s worth stressing that despite its Xbox Live Arcade status, this is a full Assassin’s Creed game complete with all the usual gameplay elements. OK, there are only two locations, but New Orleans looks and plays every bit as good as Boston or New York in ACIII. The Bayou, with all that water and those alligators, can be a pain to negotiate, but still provides its own unique challenges. 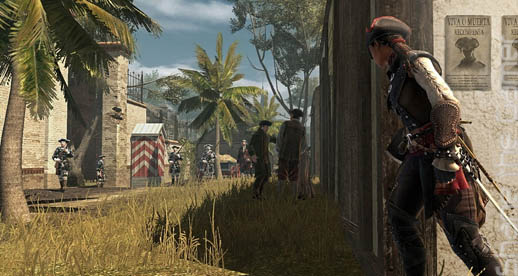 As veteran players would expect, each location is dotted with viewpoints which Avaline can climb and synchronise with, rewarding players with a sweeping animation of the surrounding and unlocking the map for that area. As in previous games, the fastest way down from the lofty perch is by jump off using a, series trademark, leap of faith onto a straw cart/pile of vegetation waiting below.

As well as the parkour-inspired rooftop running, the tree-climbing antics introduced in Assassin’s Creed III are also present in this game, and the only way to efficiently get about the Bayou area. 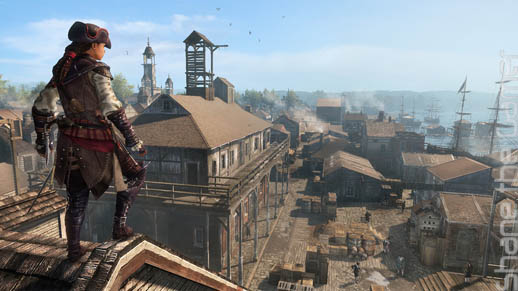 Avaline is armed with her traditional assassin’s hidden blades, a sword and an axe. She also has poison and berserk darts, as well as pistol at her disposal. A little later in the game she obtains a whip that can be used on enemies as well as to swing across chasms.

Even though Aveline is a member of the Assassin’s Brotherhood, unlike her predecessors she has no need to continuously advertise the fact to the citizens of New Orleans.  In order to move about the city without causing a fuss Avaline can switch between three personas using some very handy walk-in wardrobes dotted around the game world. Each persona grants Avaline certain traits.

Dressed as an assassin she can climb, free run and do all the things that assassins have done in previous games. Unlike before, seeing an assassin running about draws the attention of guards and, if you hang about, they will attack. 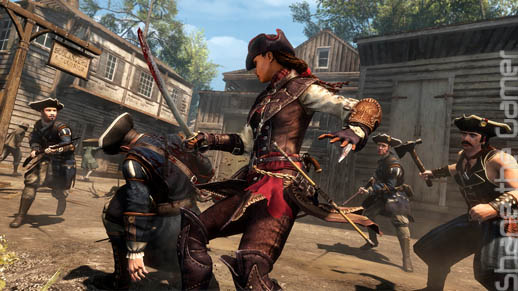 In the attire of a lady Avaline can wander the streets unnoticed but is weak in combat and she can’t jump or climb over objects, sprint or free-run. She can, however charm guards into following her and dispatch them out of the way.

In the rags of a slave she can blend in and free run, but is still weak in combat.

All three will gain notoriety when caught carrying out unsociable deeds. The assassin using bribes to lower it, whilst the lady must dispatch witnesses and the slave ripping down wanted posters. 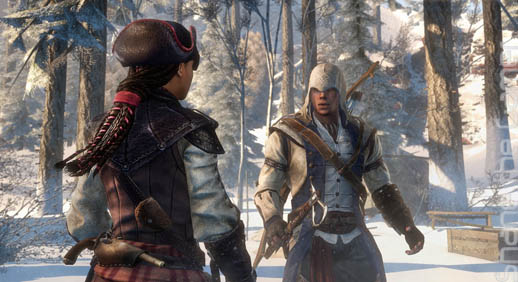 Whilst Avaline’s personas may sound like an interesting idea, in practice they don’t really come into play. Apart from when the story forced me to change cloths I didn’t see any really advantage in voluntarily switching personas. I seemed like a bit a wasted idea to me.

As in previous games Avaline has a base of operation, whereby Avaline can view her spoils and partake in a trading minigame. You buy a commodity and sail to a destination. Some routes have hazards such as storms and some destination offer more money than other. With more money you can buy more ships and more goods to trade. It’s not as much fun as ACIV’s pirate battles or the previous games assassin contracts, but it is a mildly entertaining distraction that earns a bit of cash for supplies. 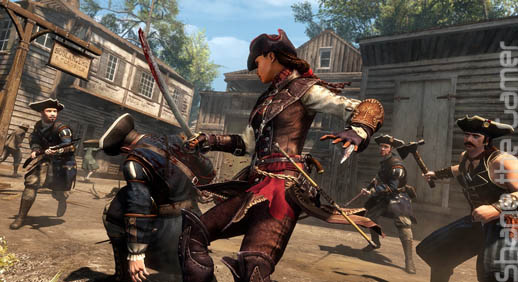 As you’d expect from an Assassin’s Creed game there’s an almost overwhelming amount of things to do in the game. The environment is littered with chest to loot and diary pages to collect. Avaline can also renovate shop fronts to provide her with areas to change in.

There are also a few side missions thrown in for good measure. They’re pretty light affairs and basically boil down to located and chasing down a target before killing them. They do, however, work well as a distraction if you want a change of pace between missions. 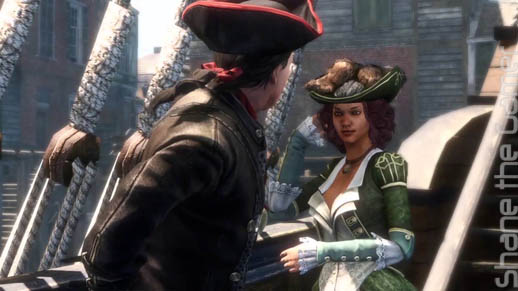 Graphically, the game is a bit of step backwards compared to Black Flag. However, the visuals are pretty much up to the standard of Assassin’s Creed III, and could certainly hold their own against the older entries in the series. The remastered visuals have an almost painterly soft-focus look about them, a fitting art style for a game that is really a spin off from the main series. The animations and cut scenes are 100% what you’d expect from a full-price Assassin’s Creed game.

It would be a grave mistake to dismiss this game as some sort of rehash of an average-rated handheld game. The HD upgrade is not the hatchet-job that it could have been and succeeds to file off some of the rough edges that the game had in its original release.

Assassin’s Creed: Liberation HD is an essential part of the Assassin’s Creed mythos. Despite its small beginnings it is an epic tale covering many years of Avaline’s life as she uncovers a Templar plot directly manipulating her family to achieve its goals.

The visuals are on par with ACIII and apart from the short missions all signs of the game’s Vita origins with its touch-screen mechanics have been removed. What we a left with is a well-produced spin-off from the main Assassin’s Creed story that fans of the series owe it to themselves to experience.