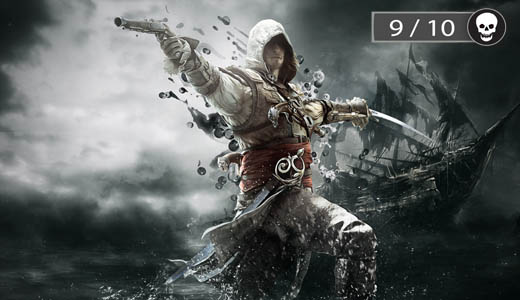 How do I review the Xbox One version of a game that I’ve already played on the 360? It’s a question that I’ve been asking myself a lot in the past month or so.

I could start at the beginning and rattle on about the story, characters and the gamplay; or I could just wade into what all that extra processing power and memory adds to the game. It’s a difficult one as, for the most part, the first wave of third-party cross-platform Xbox One and PS4 titles don’t really add much into the mix over their Xbox 360 and PS3 counterparts. 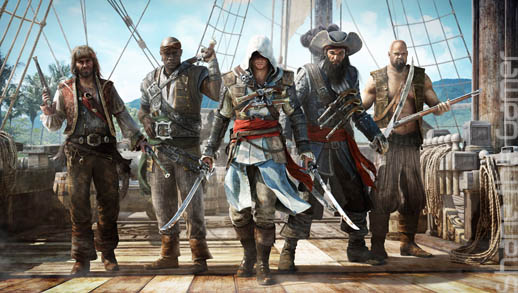 Ubisoft’s Assassin’s Creed IV: Black Flag isn’t really a stand out “next-gen” game (I know we can’t really say that any more, but you know what I mean). I’d happily say that if you have been playing it on the 360, there’s no real need to upgrade to the Xbox One version.

I’m not saying that because the Xbox One version is deficient in some way, it’s just because the game is so good and so nice-looking on the Xbox 360 that you may as well stick with it. It’s actually a credit to Ubisoft that they have produced such a fine game for the Xbox 360 as the curtain goes down on the console. 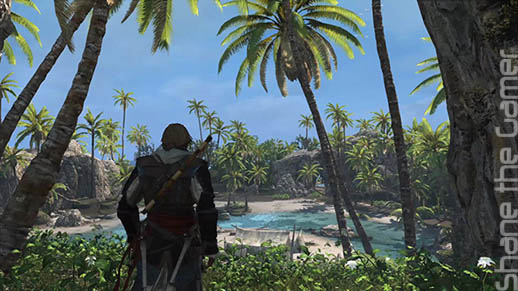 With Assassin’s Creed IV: Black Flag Ubisoft continues to explore the lineage of modern-day assassin Desmond Miles. Things are different this time, following the events of the last game; you are now an employee of Montreal-based Absergo Entertainment. Using Desmond’s DNA and a new desktop-based version of the Animus (the device used to travel through genetic memories) you get transported back to the 18th Century to re-enact the life of one Edward Kenway, scoundrel, privateer and pirate. 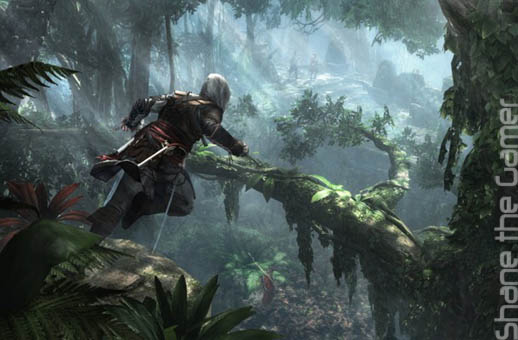 I was a bit worried about this chapter in the Assassin Creed franchise. The  series started out in the Holy Land during the Crusades before moving on to Renaissance Italy and then there was  Assassin’s Creed III’s American Revolutionary War setting, last year, which seemed designed to capture a more mainstream audience. Whilst not the commercial cash-in that I thought it would be, AC3 was considered by some to be weaker than what had gone before. The news that the next instalment would feature pirates made be very anxious indeed. 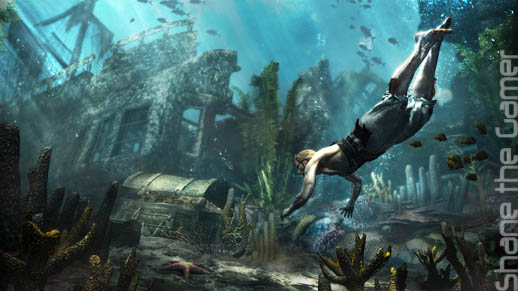 Whilst fans seemingly struggled to identify with AC3’s grumbling protagonist, Conner Kenway, the game’s naval combat went down a treat. It’s no surprise that Ubisoft went and expanded on the nautical theme for their follow-up.

Assassin’s Creed IV: Black Flag is really more of a pirate game than an Assassin’s Creed game. We still have the Templar’s and their scheming and the Assassin’s trying to thwart them, but it’s all a lot lighter this time; almost a sub-plot. And whilst I cared very little for the present-day portions of the previous games, the Absergo sections of the game have been marginalised so much this time that AC4 doesn’t actually seem to propel the macro-level Assassin’s Creed story we’ve been following for the last five games at all. There’s almost a spin-off flavour to it all, as kind of suggested by the “Black Flag” suffix. 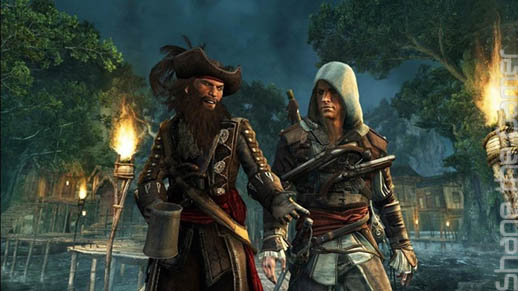 The emphasis this outing is on Caribbean piracy, with a story that has player coming face-to-face with legendary pirates such as William “Blackbeard” Thatch, Charles Vane and Benjamin Hornigold. Even though Ash Ismail, the game’s director, told me that they were going for fictional realism, the game is still closer to the swash-buckling style of Pirates of the Caribbean than a po-faced BBC costume drama; with Edward Kenway projecting a lovable rogue characterisation that deftly channels the likes of Han Solo or his more modern incarnation, Captain Mal Reynolds. 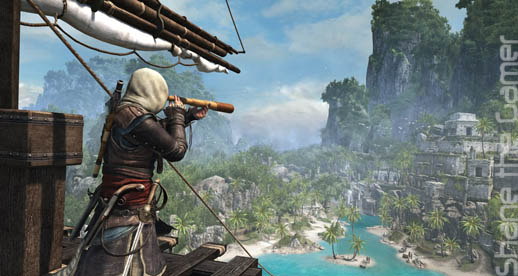 For a lot of the game, about 40%, players will be aboard Captain Kenway’s ship, The Jackdaw. In reality you can spend hours and hours engaging in naval battles with the British, the Spanish, the portuguese and the odd pirate hunter; pillaging cargo and generally being a terror on the high seas. The more cargo you loot, the more upgrades you can make to The Jackdaw which in turn allowed you to take on some of the more formidable ships.

The game’s portrayal of the Caribbean is dotted with islands, fortifications and smugglers dens; there’s always something to do. The naval element of the game is huge fun and it’s easy to get lost in the game just exploring island and engaging in ship-to-ship combat. 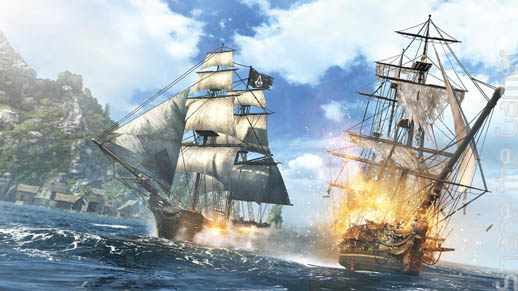 Sea battles aside, the land-based gameplay is very familiar; the developers having not wandered far from the experience provided in the last few games. There are the very climbable-looking Y-shaped branches, the shimmering rope and tackle lifts to propel you into the air, and the slice/slice/block swordplay. It is all good, but I just wish that they had been as adventurous with the gameplay this time as they have been with the narrative and setting.

What AC4 does well, it does very well and I can’t really fault Ubisoft for taking an “if it’s not broke don’t fix it approach to the core gameplay. If anything I found the rooftop free-running a bit better implemented this time. I always seem to find myself running along at street level in the previous game.

As with all the previous Assassin’s Creed games the environments are incredibly detailed and full of things to do, making it easy to get distracted from the task at hand. As before, Edward has a full arsenal of weapons ranging from his twin sword and pistols though to a blowpipe and smoke bomb; most of which can be upgraded.

Overall the gameplay in AC4, both on land and sea, is a lot of fun. I did, however, whilst assessing my experience for the optional post-mission rating survey (which is an interesting, if unusual way for Ubisoft to get player feedback) realise that a lot of the game is so similar to what has gone before that it is starting to get a bit dull. 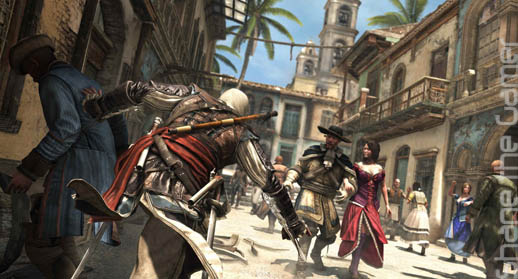 AC4 is full of those bloody eavesdropping missions whereby Edward must remain out of sight, but within a certain radius of the targets. I don’t like these missions; I could understand the odd inclusion, but there just seems to be too many of them. The same goes for the missions that require players to follow targets, again out-of-sight. We’ve seen it all before in previous games.

In keeping with the nautical theme, the diving sections are a new addition, it’s a shame that Edward is so difficult to control underwater and that the one-false-move-and-you’re-dead shark avoidance mechanic is so tedious. Unless I had to, I avoided these sections of the game. The developers have obviously spent a fair about of time on these underwater sections, I just think that they needed a bit more work. 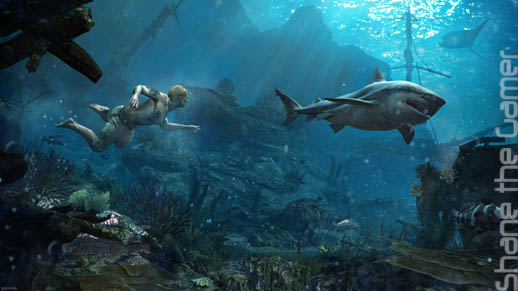 Whilst there’s no doubt in my mind that Ubisoft are very talented game designers, there’s something about the games that they produce that sometimes seems soulless. It’s like they are the products of science and not art. Whilst they psychologically present all the right buttons, offering players the correct mix of risk, reward and intrigue, there’s very little craft. It is only the narrative that displays any sort of real creativity.

Assassin’s Creed IV: Black Flag typifies this. We have the land-based sections similar to those that we’ve played across the five previous games, the expanded ocean-based sections and an almost endless amount of throwaway mini-games and collecting quests. The whole experience ranges from excellent to mediocre. 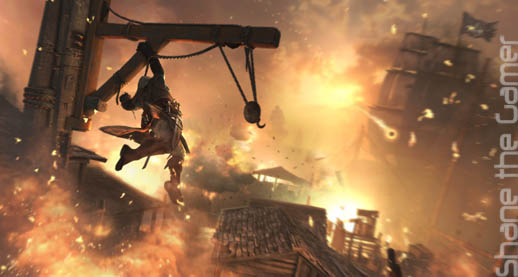 Even though I loved the game to bits, if I’m honest there’s more mediocrity than excellence in AC4. But when it is good, it really is very good, and the story -especially the characterisation of Edward Kenway – is superb.

OK, so what about all the next-gen goodness? Well at first glance I didn’t really see that much to set the Xbox One version apart from the 360 version.  As I mentioned earlier, that’s mainly due to the fidelity of the Xbox 360 version rather than the fault of the Xbox One game.

The visuals are, generally, more polished than on the Xbox 360 version- although you would have to do a side-by-side comparison to notice them.  There are also, however, loads of little added subtleties that do make for a much better, if only visually improved, experience.

Moving through bushes is one of them. For the Xbox One, Edward actually displaces bushes as he moves through them. You can see the foliage rustling as he creeps through it. Apparently this sort of physical iteration extends to raindrops hitting the leaves as well. I can’t say that I noticed that, and it’s going a bit too far if you ask me. Watching the same action on the Xbox 360 afterwards, with Edward literally moving through the rod-like bushes, you can really appreciate an improvement that if viewed in isolation you’d just take for granted. 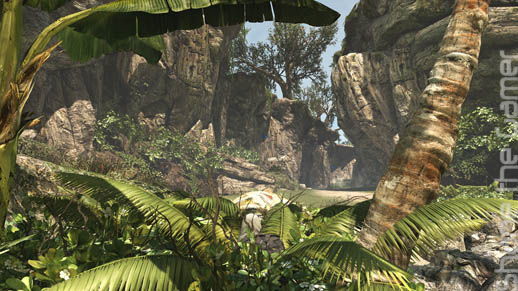 Another “next-gen” enhancement is the cannon smoke during the sea battles. Whereas the Xbox 360 battles were smoke-free events, the Xbox One cannons produce so much smoke that they should come with a health warning. The opaque clouds add a bit more authenticity to the proceedings and add to the challenge, as targets get obscured by the smoke.

In the towns there’s less pop up. I lost count of how many times empty areas suddenly became populated on the Xbox 360 version of the game, as denizens materialised in front of me in a weird Star Trek sort of way. Population centres on the Xbox One version of AC4 go on forever. 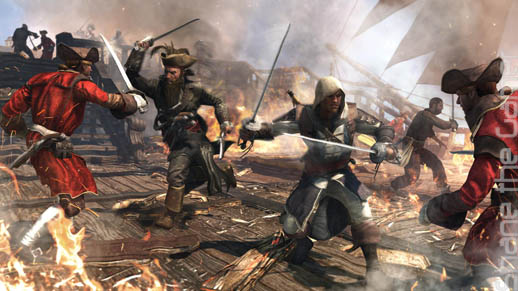 Another bonus for players on the Xbox One is that there’s no need to change discs to play the multiplayer components of the game. With the game installed/coming on one Blu-ray disc, it’s easy to select the multiplayer option without having to reach from the box.

Despite the words of the overly-enthused virtual Absergo employee’s intro to the multiplayer game, whilst most acts of piracy may have occurred on dry land I, probably along with everybody else, would have liked to have played AC4’s naval battles in the multiplayer game. Sadly, I could not. 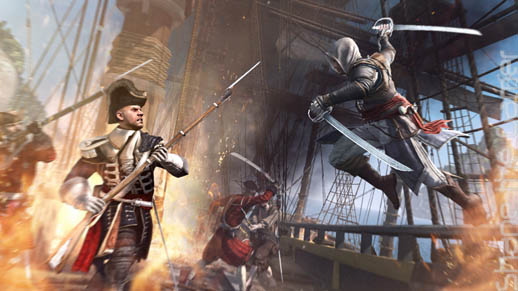 AC4’s multiplayer is much the same as what has gone before, with players sneaking about and stabbing each other in the back. It’s a bit of gameplay that you either enjoy or you don’t. Whilst I’ve always applauded Ubisoft for resisting the urge to go all shoot ‘em up for Assassin’s Creed’s multiplayer, it’s never been my cup of tea.

AC4’s multiplayer also includes the modern gaming scourge of microtransations. Real money can be used to buy in-game Erudito credits that can be used to obtain perks for your multiplayer character, effective a pay-to-win scheme. If only the multiplayer game included ship-to-ship combat. I may have been persuaded to exchange some real cash for a few extra canons on deck.

Part action adventure-part historical docudrama Assassin’s Creed IV: Black Flag is a thing of wonder. Whilst not quite as cerebral as it’s more heady predecessors, it’s still one hell of a game. It’s not the graphical showcase I’d have liked it to be, but AC4 definitely benefits from all that extra processing power afforded by the new console, making a great looking game look even better on Xbox One.

The game has masses of content, to the point of being overwhelming. Some of it is of varying quality and may be a bit too familiar for long-time follows of the series. But the good outweighs the not so good and the ripping yarn of a story papers over any remaining cracks. With all the collectables, the side missions and special encounters on the high seas, I guarantee that you’ll still have 30% of the game left to play when the credits roll.

And, about that; I felt that the game finished rather abruptly. Whilst there is a mid-credit (watch out for that) epilogue, there seems to still be plenty of Edward’s story left untold. Perhaps something for later this year?