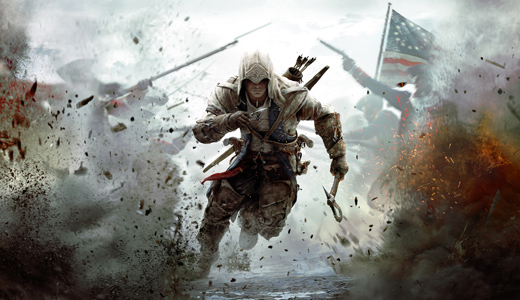 Assassin ‘s Creed III is Ubisoft’s fifth major installment in the series. Having not played the previous games, the idea of starting this late in the series initially seemed daunting. Ubisoft however did a great job at welcoming new players into the series.

If you haven’t played an Assassin’s Creed game before basically you play as an Assassin, a group of super freaky climbers who fight for freedom and peace. Their adversary, the Templars, seek order and control, mostly through morally questionable means. This game combines history and science fiction with a ton of conspiracy theories thrown in. The gameplay is that of an action-adventure with a focus on climbing and stealth. 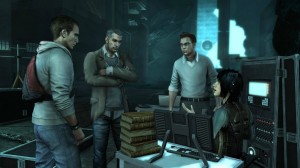 starts off with an introductory sequence summarizing what has happened in the previous entries, followed shortly by a tutorial. Basically the world is in danger and the protagonist, Desmond Miles, a modern day assassin, has been charged with saving it. He must use a device known Animus to relive the memories of his assassin ancestors to find clues that that would help him in modern day.

The introductory sequence gives a good grounding on the story so far, however more details will be picked up along the way if you are new to the series. The tutorial seemed to be lacking, it did not provide enough experience to really understand combat. A veteran of the series might not find this a problem however as a newcomer I found it to be a flaw.

In the Animus you play as two characters from the colonial era, HaythamKenway, a slightly arrogant British noble and Ratonhnhaké:ton aka Conner, a strong minded Native American. Both characters are very enjoyable to play as, with very interesting stories, however it is Conner who really steals the show. 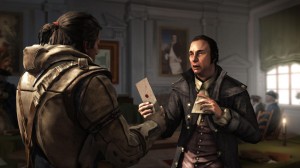 During the initial few sequences as Haytham, the main story is interesting but there isn’t much excitement to be found outside of that. It is not until you play as Connor does the game really begin to open up, filling the world with a ton of enjoyable things to do outside of the main missions.

It quickly gets to a point where playing with Connor on his quest to assassinate the Templars makes Desmond’s quest to save the world seem dull in comparison. This is mostly due to the excellent execution of Connor’s story.

This game is full of historically significant people, places and activities from the American Revolution. One of my favourite features of this game was the Animus Database which is slowly filled as you do certain things with a wealth of information on people, places and things. 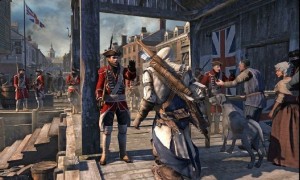 myself going through the Animus Database and reading about the person I just encountered. Also I found it enjoyable that various perspectives on people and events were given. The main character Connor wasn’t shy about pointing out hypocrisy or faults with both the loyalists and the patriots.

For the most part you will be running, climbing and jumping through four main areas, your home village Homestead, the wilderness of the Frontier and the cities of Boston and New York .

These areas are filled up with a plethora of things to do including Liberation, Homestead and Naval missions where you gain allies, improve your village and…well…I’m not too sure what you gain from the last one. 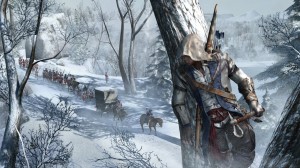 You can also hunt, trade, collect almanac pages and trinkets, find chests, take forts and errr…deliver letters. This ensures there is always something to do in the game and provides for extensive lasting appeal.

Unfortunately, the majority of these gameplay elements suffer from bad execution. Many of the abovementioned things suffer from lack of reason to actually do them. It seems that Ubisoft spent a lot of time coming up with and developing these features but failed to properly implement them.

One of the main features and most enjoyable experiences you will get in this game is the naval missions. You captain a warship called the Aquila and are given missions involving taking down enemy ships. The control system used for the ship was easy to learn and use and you are able to buy a small selection of upgrades for your ship. 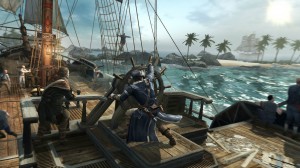 environmental factors such as rocks, wind and storms really add to the experience. Battling through violent storms in your warship, the Aquila, riding tsunami-esque waves while trying to take down an enemy vessel is truly a memorable gameplay experience. The only problem is that the missions are too easy and too few and there is no worthwhile reward for actually completing them.

Hunting also provides an enjoyable experience however it does seem to get repetitive and like the naval missions there isn’t much of a reason to do it. The initial amusement of stealthily climbing through trees and performing a cool diving attack in order to kill an animal does wear off.

The combat is one of the highlights of the game. You have available a large selection of weaponry from bows, poison darts, tomahawks, swords and guns. 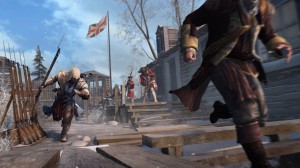 The game also allows you to fluidly climb up almost any tree, building or cliff you see. The only drawback of this is that since there are so many things to climb on, the game sometimes finds it hard to understand what you want.

The combination of these two things and being able to use recruited allies abilities in cities allows for great variation in the way combat is approached and ensures it never feels stale.

Visually the game looks amazing due to mix of the setting and the graphics. Weather and day/night effect makes going through the same areas seem less repetitive. Running through the wilderness with snow all around you looks and feels stunning.

The character animations look great and are equally matched by good voice work. The voice work was both consistent and of high quality. Some of the environment falls short during close inspection but still manages to look nice at a distance. 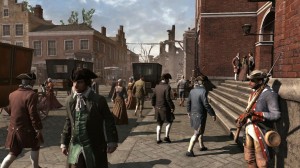 are by far the biggest problem visually in Assassin’s Creed III. Shadows seem to almost sparkle which is both irritating and distracting during cutscenes.

Another issue with the game is the amount of bugs encountered. These bugs ranged from frame rate drops to major characters becoming unresponsive and preventing progress during missions. During one cutscene I even had a wolf maul me to death.

There is also a lot of NPC pop-ins while running around. Running through a street and seeing whole groups of soldiers and civilians pop-in really takes away from the experience.

The online multiplayer provides for some extra fun and lasting appeal but doesn’t match up to some other online experiences. The navy battles would seem to be perfect for online gaming however was not utilized as such. 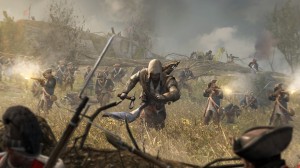 The available game modes involve you trying to assassinate other players while trying to avoid being assassinated yourself, by blending in with the crowd. This does provide for a lot of amusement but constantly felt like it was lacking something.

Overall Assassin’s Creed III looks and feels like a great game. The main story is several hours long with countless extra hours of side missions to complete and items to collect. While the execution of some components could have been better it doesn’t stop Assassin’s Creed III from been one of the best games of the year.

There is something for everyone in this game. Whether you are an Assassin Creed veteran or a newcomer to the series you will greatly enjoy Assassin’s Creed III. Playing the previous entries in the series is in no way essential.

Grant Cheetham is a special guest reviewer from www.stateofplay.co.nz Head over to the site and give him some cred!