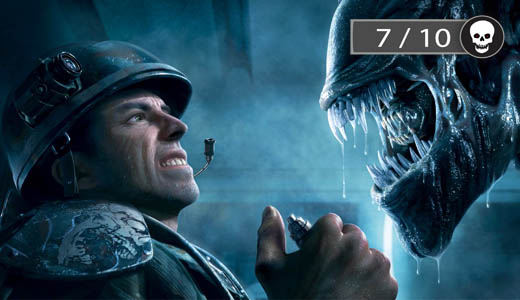 Aliens: Colonial Marines is SEGA’s follow up to 2010’s Aliens vs. Predator. To say the game has been a long time coming would be an understatement!

Having been in and out of development with the folks that did the Borderlands games, Gearbox Software, for the best part of six years.

Now, unless you’ve been living under a rock, you must have heard of the 20th Century Fox’s Alien movie franchise.

In the first film, Ridley Scott’s Alien, the crew of the Nostromo are diverted to an uninhabited planet to check out a distress signal. Whist investigating the wreckage of a huge derelict spaceship, one of the crew gets attacked by a parasitic alien creature that lays eggs in his stomach. 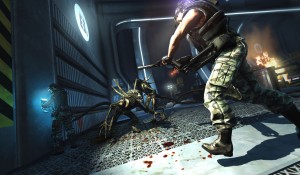 what must still be the nastiest dinner scene ever filmed, an alien creature with acid for blood, known as a Xenomorph, burst forth from John Hurt’s chest.

For the rest of the movie the alien proceeds to wipe out the hapless crew of the ship one by one. In the end only Warrant Officer Ellen Ripley survives along with the ships cat, Jones. The movie closes with Ripley entering a stasis chamber aboard the Nostromo’s lifeboat.

Seven years later, in 1986, the James Cameron directed sequel, Aliens, picked up the story fifty-seven years later with Ripley rescued and revived after decades lost in space, frozen in stasis.

During a debrief with her employer, the sinister Wayland-Yutani Corporation, Ripley discovers that the alien planet on which the Alien was found, LV-426, has now been colonised. Worse, the colony has recently gone silent. 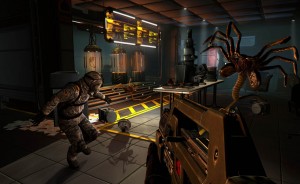 In go the US Colonial Marines aboard the USS Sulaco along with a rep from the colony’s sponsor; Wayland-Yutani, and Ripley as a consultant.

Cameron upped the ante by pitting the squad of marines against a legion of the alien Xenomorphs as opposed to the lone killing machine in the first movie.

Despite better firepower this time around the result is practically the same with Ripley along with a little girl called Newt and Corporal Hicks ending up the only survivors. Once again the film finishes with them all entering stasis pods.

Billed as a direct sequel to James Cameron’s Aliens movie; Aliens: Colonial Marines follows a group of US Colonial Marines investigating exactly what happened to the crew of the USS Sulaco following the events of the movie. 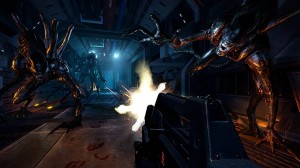 campaign game starts with the player boarding the derelict Sulaco, adrift in space, orbiting LV-426. As per the beginning of Alien 3, the stasis pods of the survivors of the Aliens movie are missing from the ship.

As you’d expect the ship is infested with alien Xenomorphs,  but all is not as it seems. The marines are not just up against the aliens, something much more sinister is afoot and, unsurprisingly, it’s got something to do with “The Company”, the malevolent Wayland-Yutani Corporation.

The game’s plot is actually top class and fits nicely into the Alien universe.

The writers have taken a bit of liberty with the events as they happen at the start of the third movie, but it serves the game well and to be honest, goes some small way towards addressing one of the things that I didn’t like about David Fincher’s Alien three-qual. 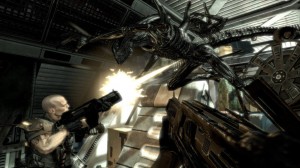 At the risk of spoiling things, I’ll leave it at that. Suffice to say that the plot provides ample reason to visit a variety of very familiar locations.

The locations have been taken directly from the Aliens movie, allowing players to explore the USS Sulaco, the surface of LV-426, the Hadley’s Hope colony and even the Space Jockey’s ship.

A lot of work has gone into recreating these settings, including details that could only be noticed by eagle-eyed fans of the movie. Also, the retro-future 80’s tech is a nice touch, with chunky keyboards and monitors in keeping with the movie’s design style.

Players take the role of USCM Corporal Christopher Winter, which means access to plenty of firepower, most of which will be familiar to fans of the Alien movies, such as the Pulse Rifle, Smart Gun and Sentry Turret. 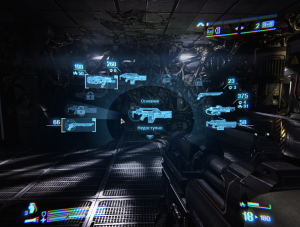 that the aliens were a little weak to begin with, but at the same time it was easy to get overwhelmed by the numbers.

This plays the creative license card in introducing a few new types of Xenomorph to keep things interesting.

The USCM is also up against human mercenaries which mixes things up a bit, requiring a totally different strategy. Things get even more complicated when caught in the cross-fire between the Mercs and the Xenos!

The Campaign Mode, for the most part, provides players with a slightly above average first person shooter experience. 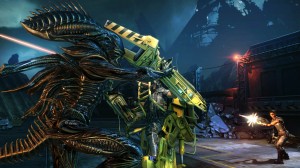 Basically, it does its job and, along with the very alien-esque plot and settings, keeps the player engaged. I did come across some pretty inexcusable glitches, with aliens going through walls and floors.

The friendly AI can also be a problem. At numerous times during the game my AI colleague, O’Neil, forgot what he was supposed to be doing, leaving me to either tackle a rampaging horde of Xenomorphs on my own or just standing there instead of opening the door to the next area. I had to restart a few times.

SEGA are regularly releasing patches to fix the game’s issue, but this is still happening some four weeks after release.

The Campaign Mode can also be played co-operatively with four other players. 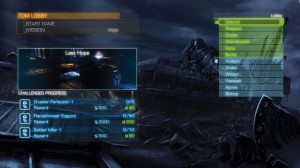 my mind this how the game was meant to be played, offering a lot more fun with friends than the usual lone-wolf gameplay.

The co-op experience reminded me a lot of the Left 4 Dead game, swapping out zombies for alien Xenomorphs. The ability to revive downed players helps create camaraderie amongst strangers similar to that of Valve’s zombie games.

Aliens: Colonial Marines also comes with its own Multiplayer Mode featuring Aliens-style variations on all the familiar game types. The obligatory Team Deathmatch pits marines against aliens, whilst Extermination works like a kind of base-capture mode, with marines detonating explosives to kill alien eggs.

Escape is a mission based gauntlet mode and lastly Survivor pits a four player team of marines against waves of aliens, like Horde mode in Gears of War 2 and Firefight in Halo 3. 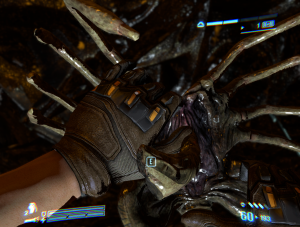 All bar Survivor feature two teams of four, one marines and the other Xenomorphs. I can’t say I enjoyed the multiplayer mode, much preferring to play online in co-op. I wasn’t really interested in playing as an alien either; I signed up to play as a marine and kick alien ass, not fumble with the awkward Xenomorph wall-crawling abilities.

Unfortunately, the decent plot, interesting settings and solid gameplay are all rather let down by the game’s un-finished look. Aliens: Colonial Marines just isn’t a nice-looking game. The graphics are very dated with zero anti-aliasing and filtered textures that make the larger environments look very bland indeed.

For me, the ghastly graphics were a complete turn-off, and made it very difficult to get into the game.

It took an hour to divert my focus from the awful presentation and actually get immersed in the game. 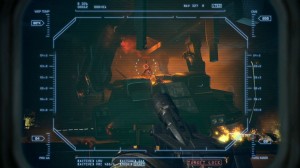 times early on in the game the combination of glitches and the poor visuals had me cursing Gearbox Software and SEGA, a developer and publisher that should know better, for abusing such hallowed source material. Thankfully, as time went on,Aliens: Colonial Marines charmed me enough to see through the mire and start to enjoy the experience.

Whilst I did end up enjoying the game, I can’t say that I’d wholeheartedly recommend Aliens: Colonial Marines.

It isn’t an easy game to like and I can see a lot of players having issues with the grotty visuals. Players that persist with the game will find, at its heart, an above average shooter that stays faithful to its source material.