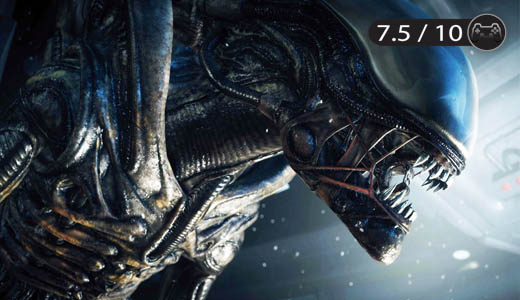 Be careful what you wish for. How it pains me to write that phrase at the start of my Alien: Isolation Review. But that single line succinctly explains my experience with the game.

Alien: Isolation has everything I’d want in an Alien game.

In the movie, the crew of the mining ship USCSS Nostromo, on their way home to Earth, are awoken from hypersleep early and asked to investigate a distress beacon coming from the planetoid LV-426. 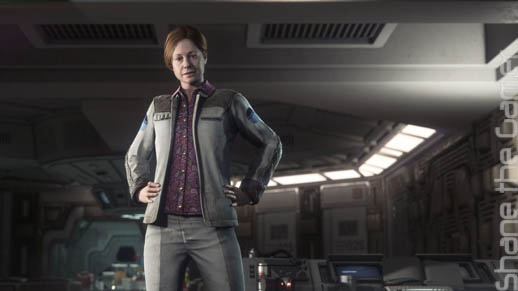 Whilst exploring the hull of a derelict spacecraft on the planet’s surface, the ship’s executive officer, Kane, is attacked by an alien creature that attaches itself to his face. When the creature finally releases its victim he seems fine, until that rather famous dinner scene. The alien creature had impregnated Kane, who becomes the first victim of the deadly alien Xenomorph as it bursts from his stomach onto dining room table.

As the creature grows the crew are picked off one by one. The audience is kept on the edge of their seats for almost the entire movie. The alien could be anywhere, and usually is, giving viewers plenty of opportunities to shout “it’s behind you”. 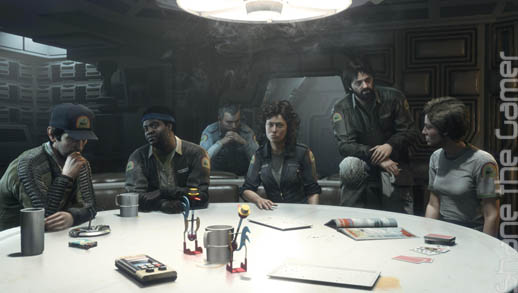 At the end of the movie Warrant Officer Ellen Ripley and the ships cat are all that remain of the crew, escaping in Nostromo’s shuttle moments before the mining ship self-destructs.

Ripley and her cat, both in hypersleep, would float in space for the next sixty years.

In the meantime, Amanda Ripley, who was only five when her mother left Earth, grows up with a desire to find out what happen to her mother and the Nostromo. 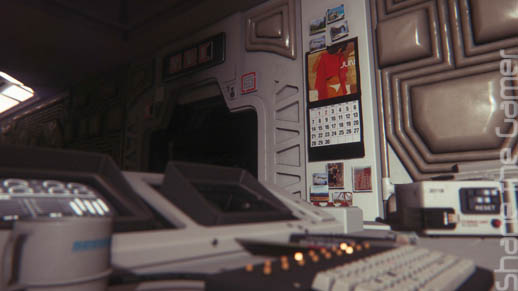 Every single game based on the Alien franchise has drawn on Cameron’s action orientated sequel, Aliens. We think of an Alien game and immediately we imagine a game all about pulse rifles, colonial marines and aliens being sliced to acidic pieces in a hail of bullets.

Alien: Isolation bucks this trend and goes back to the roots of what made that first Alien movie so scary.

As the original Sci-fi thriller, Alien took the simple idea of a killer stalking its prey and transplanted it to a battered industrial Starship, alone in the void of space.

That same sense of suspense filled isolation, this time aboard a grubby run-down space station, has been successfully emulated in the game. 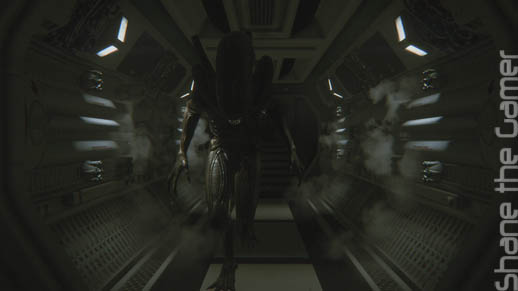 Working as a mechanic near the location that the Nostromo disappeared, Amanda is approached by company man, Samuels. The Nostromo’s flight recorder has been retrieved and taken to Sevastopol Station. Ripley is offered a place on the Weyland-Yutani team being sent to recover it. The pair of them are joined by Nina Taylor, one of the company’s legal people.

They are transported to the station via the Torrens, a ship of the same class as the Nostromo.

On arrival they find the station damaged and the communications down. In order to get inside they need to spacewalk from the ship to the station. During the walk, Ripley is separated from the others and enters the deserted station alone. 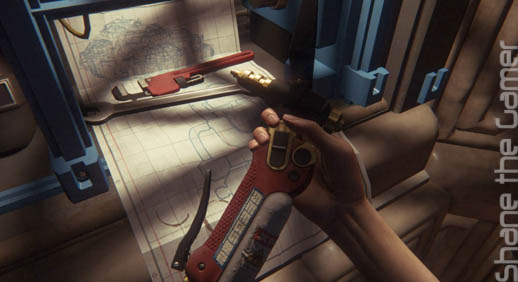 The game uses standard gaming devices; emails on terminals and voice recorders for expanding the plot with extra background information. Whilst not mandatory, these extra snippets of information help provide a picture of what exactly happened on the station.

Of course, Ripley isn’t alone on the station, but, the first hour or so sets up the game environment, easing players into what is to come. We get to wander vast empty halls and marvel at the game’s beautiful attention to detail. 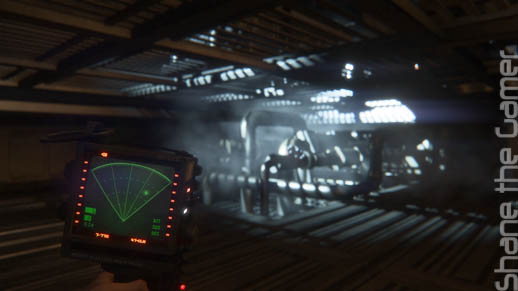 Visually, the game is nigh on perfect. It’s beautiful.

Jaw droppingly beautiful. The attention to detail that the developers have put in to recreate the 1970s retro-future look of the first Alien film is borderline obsessive.

It’s all there, right down to the creases in the grubby beige couches. And the lighting, it’s amazing, creating an almost photo-real experience. Walking around in Alien: Isolation is like movie set visit.

The graphics are just one of the ingredients that helps the game perfectly recreate the atmosphere of Ridley Scott’s movie. The music in the game successfully recreates Jerry Goldsmith’s contradictory, almost whimsical, soundtrack that is now a hallmark of the movie. There’s a sinister eerie-ness to the music that reinforces the loneliness of the abandoned space station. 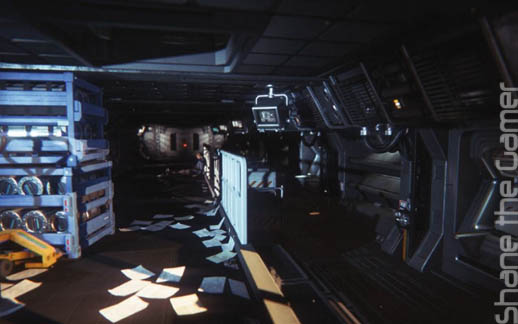 The first encounter in the game isn’t really anything of the sort, as Ripley observes some panicked humans running to or from something. It’s a bit of a non-event, but it does make you all the more aware that Sevastopol isn’t quite the abandoned hulk that that it first appeared.

It’s only a little while later before Ripley runs into another group of humans who don’t take too kindly to her presence.

So this was it.

The gloves were off and Alien: Isolation set off as it meant to carry on. I knew where I had to go, but people were in the way, people with guns that wanted to kill me. At first I just went for it, taking my wrench to a gunfight. I took one out, but the others filled me with lead. Game over, man. 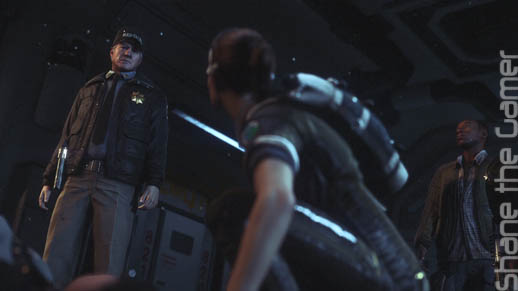 Back to the save point, and it is hello to problem number one. The game’s save system is brutal. There’s no autosave, all the saves must be done manually at save points. Apparently this is designed to increase the tension in the game. Believe me, the game has enough tension. Without this additional frustration.

Still learning the game’s mechanics, I died a few times before I succeeded. I needed a part for a hacking device for just a elevator door. Now I could have probably sneaked around for half an hour, testing my patience to the max. But I didn’t. Instead one by one I lead each of the people to a side room whereby I caved their skulls in as leaped out of the shadows. 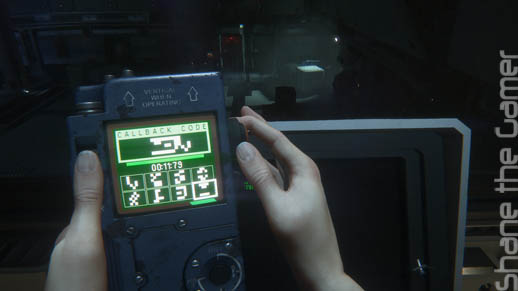 With the area cleared of the enemy I could search it at my leisure and the find the piece that I need to hack the door.

The hacking device is a minigame similar to Batman’s device in the Arkham games. Usually it involves matching glyphs or well timed button presses to open doors.

Alien: Isolation is a very door orientated experience, with your path regularly blocked for some reason or another. Apart from doors that are not supposed to open, the game gives you a variety of unlocking methods. 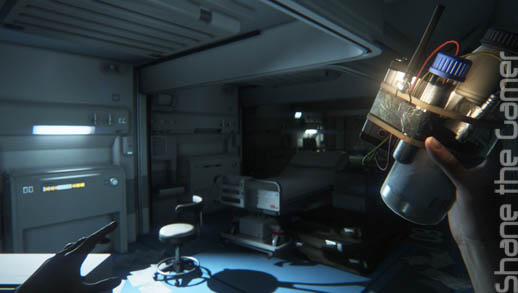 First there’s those that just open because you are standing in front of them, the easiest, although it will feel like an age when you are being chased. Then there’s the keycard, again, this takes a little while which feels like a week.

Then there’s hack; which we’ve covered. Computer terminals can be used to unlock some doors. Finally there’s a bit of brute force using the wrench to knock the padlock off and unbolt sealed rooms.

Throughout the empty rooms, corridors and halls of Sevastopol station are scattered the raw materials that Ripley can use to craft useful items, if she has the right components, that is. 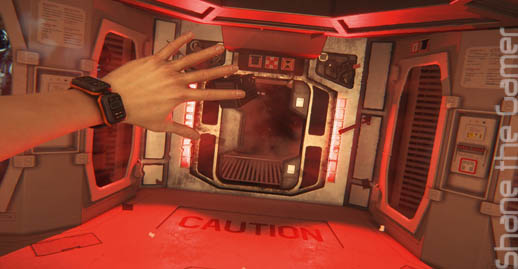 Medikits, smoke bombs, noise makers, flashbangs EMP bombs can be assembled from the junk lying about. Players are given plenty of time to get to grips with crafting equipment before things heat up.

But before we come face to face with the Alien, itself, the game introduces another antagonist, bent on killing you; synthetics. Unlike the Nostromo’s science officer, Ash, the synthetics in Alien: Isolation are the product of Wayland-Yutani’s rival company, Seegson, who also own the Sevastopol station. 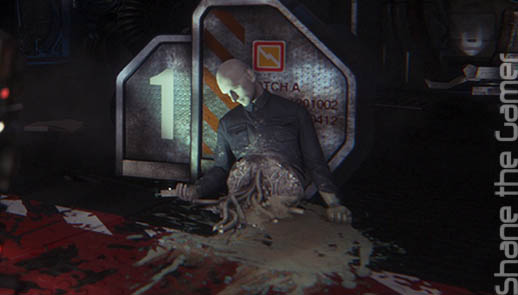 They are easy to outrun, but if they catch you they will attack with brutal efficiency.

They take plenty of bullets and whilst they can strike at you and they will usually grab your arm and stop you. They don’t like shock weapons, which stun them and are, ultimately, the best way to defeat them. Again, the game would much prefer you to sneak past them rather attack them. 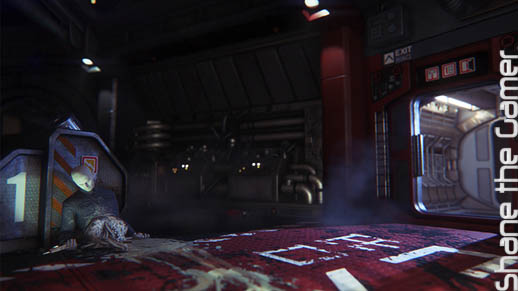 Thankfully, by the time I came across my first rogue Working Joe I’d obtained the motion detector. The device made famous in the movies is, of course, in the game.

When active on the screen the background is blurred, as it would be as you focused close up. By pulling the left trigger (yes, I’m playing with a joypad) the focus, very cinematically pulls from foreground to background. This gives plenty of opportunity for the moving object on the screen to suddenly come into focus right in front of you.

The motion detector helps to work out a route around enemies rather than directly engaging with them. 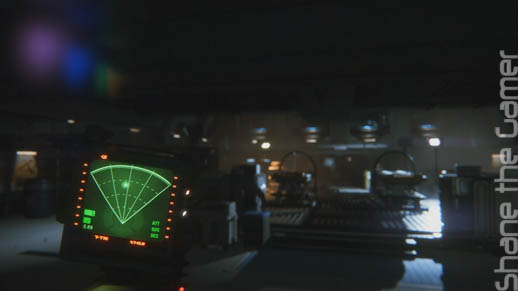 Sometimes their activities will be directly blocking the path ahead.

For times like this the Sevastopol station’s vent system comes into play. Oh, just.

You sometimes have to go in the vents. You know what else uses vents? Yes, you guessed it. Trapped in an enclosed space is not a good place to be when there’s a perfect killing machine stalking you.

And about that. The Creative Assembly may have recreated a perfect retro-future in keeping with the movie, but they really outdid themselves with the alien. The way the creature elegantly lowers itself from the ceiling vents, its walk and even the way the end of its tail twitches, is amazing. And bloody scary. 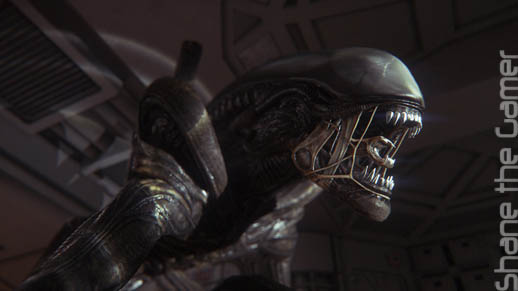 The creature’s animation is flawless, and it has to be. Whilst you don’t really want to be near the thing, I did get to see it up close; usually as it walked past the desk I was cowering under or the locker that I was hiding in.

With the game, unfortunately, requiring player’s to rely a lot on trial and error, I seemed to be on the receiving end of the creatures secondary jaw; with it smashing open my skull, and it’s tail as it took me down whilst running away, rather a lot.

For all its perfection, its attention to detail, I found Alien: Isolation more frustrating than fun. 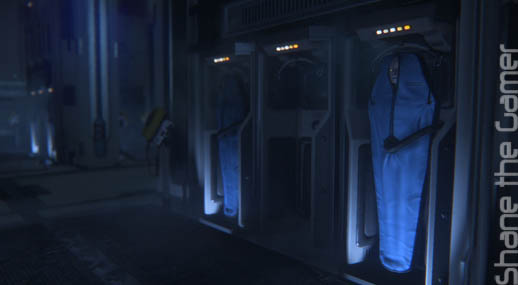 It did try my patience, but it was mainly the distance between those bloody saves.

I don’t mind retrying different strategies when faced with a particularly challenging area, but I don’t want to spend five minutes getting back to that point every time I die.

It’s a clever game, don’t get me wrong, and a one hell of an achievement. Hopefully it is the shape of things to come but, unless hiding under desks is your idea of a good time, Alien: Isolation is going to piss you off more than it pleasures you. 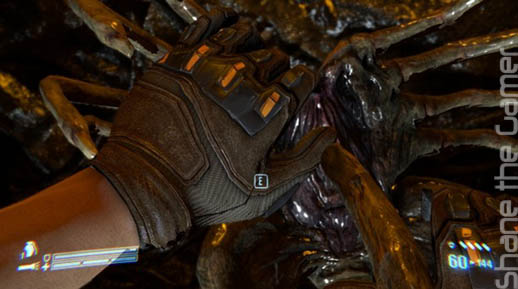 It’s a shame because I found the experience fantastic at some points. It just lacked a bit of fine tuning resulting in gameplay that I found cruel and punishing rather than fun and satisfying.

As sad as it was, I couldn’t help but think just how much better the game would have been if I’d been given a standard issue Colonial Marines’ pulse rifle.

In the end, despite wanting desperately to like the game, I can’t hand-on-heart say that I do. I have a lot of respect for the game, due to the level of technical accomplishment, but it is too hardcore with the stealth for me. 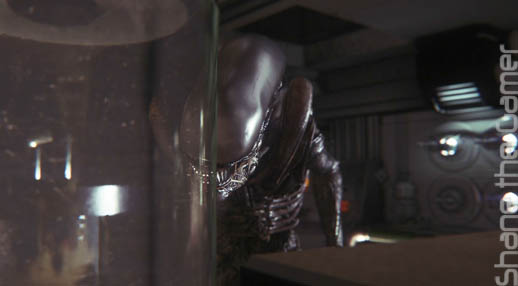 I can see serious stealth fans with the patience of a saint lapping this game up. I think those of us with less patience can also enjoy the game, but maybe only in very small doses.

Despite the issues I have with the game, it’s a step in the right direction, for sure. I really hope that Sega doesn’t give up, as Alien: Isolation comes so close to getting it just right.